Historical Background
The Palmyrene Empire (260–273) consisted of the (former) eastern Roman provinces of Syria, Palestine, and large parts of Asia Minor. This breakaway kingdom was ruled by the famous Queen Zenobia and had won many victories over the Sassanids, while repelling the Romans at the same time. Queen Zenobia believed that she and her general Zabadas could take Egypt while the Romans were busy with the Germanic tribes of the north. In 272, Emperor Aurelian, fresh from his dramatic victory over the Alemanni, marched east to end the threat from Zenobia and restore the eastern provinces. After overrunning Syria, Aurelian met the main Palmyrene army at Immae, a short distance east of the city of Antioch.
The Battle of Immae began with a Palmyrene cataphract cavalry charge led by Zabadas. After a short struggle, the lighter Roman cavalry formation fell back into a marshy area. Here, as planned, the Roman infantry was waiting to attack the now tired, disorganized cataphract cavalry, who routed and fled. Zenobia and her infantry made a stand on a series of hills until the Romans advanced and cut them apart. The queen and her general retreated to Antioch. After some additional campaigning, Aurelian captured and sacked Palmyra, bringing an end to Zenobia’s empire and restoring the rule of Rome in the East.
The stage is set. The battle lines are drawn and you are in command. Can you change history? 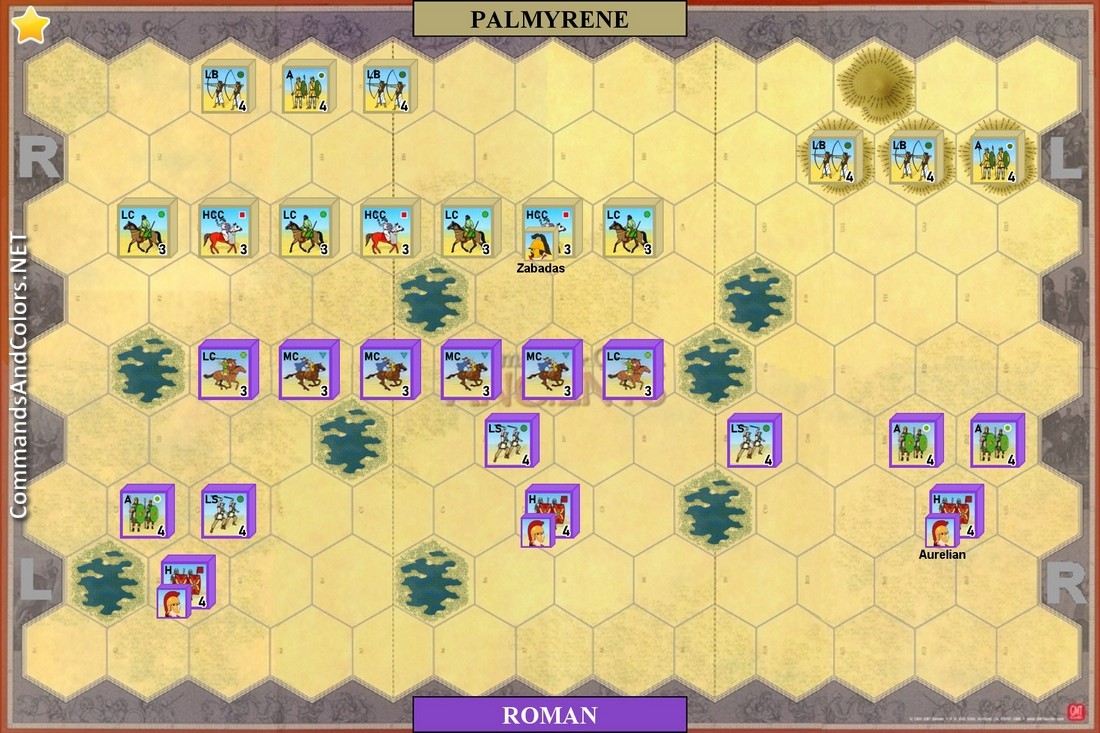 Special Rules
Imperial Legions rule is in effect for the Roman army.

GF1954 replied the topic: #4148 4 months 3 weeks ago
2 more solitaire games with each side winning one. In the first, Palmrene won 6 - 2, with two of the cataphracts just destroying the Romans in the center. In the rematch, the Romans had better luck against them, winning 6 - 3.
GF1954 replied the topic: #3824 1 year 3 months ago
2 solitaire games, with the Romans winning both, 6 - 4, and 6 - 5.
ner.gif" width="120" height="90" alt="driddle01's Avatar" />
driddle01 replied the topic: #2564 4 years 1 month ago
Similar to history, the Romans eliminated the Palmyrene left flank while maintaing center. The cataphract cavalry came into play, but too late to salvage victory for the Palmyrene force.
Read More...