Historical Background
Scipio, the victor of Baecula and Ilipa, has led his battle-hardened army to Africa, and has placed the city of Utica under siege. The Great Numidian cavalry leader, Masinissa, has gone over to the Roman side.While the siege continues, the Carthaginians raise a large, but untried army. Rashly, the Carthaginians advance to raise the siege. Scipio leaves a siege force and meets the larger Carthaginian army on the Great Plains. After two days of skirmishing, Scipio initiates the battle, sending Masinissa and his crack cavalry against the Carthaginian right while the superbly trained legionary infantry moves to envelop the Carthaginian left. Initially, the poorly trained Carthaginian center holds, but Scipio's better-trained troops quickly overwhelm both flanks. Sensing approaching disaster, the Carthaginian center breaks. The entire Carthaginian army disintegrates and suffers heavy losses as the survivors stream back to Carthage. Scipio returns to the siege of Utica, and the desperate Carthaginians turn to their last hope—Hannibal. They recall their greatest general from Italy. The following year, the final battle of the Second Punic War (Zama) will be fought by its two greatest generals, Hannibal and Scipio.
The stage is set. The battle lines are drawn and you are in command. The rest is history. 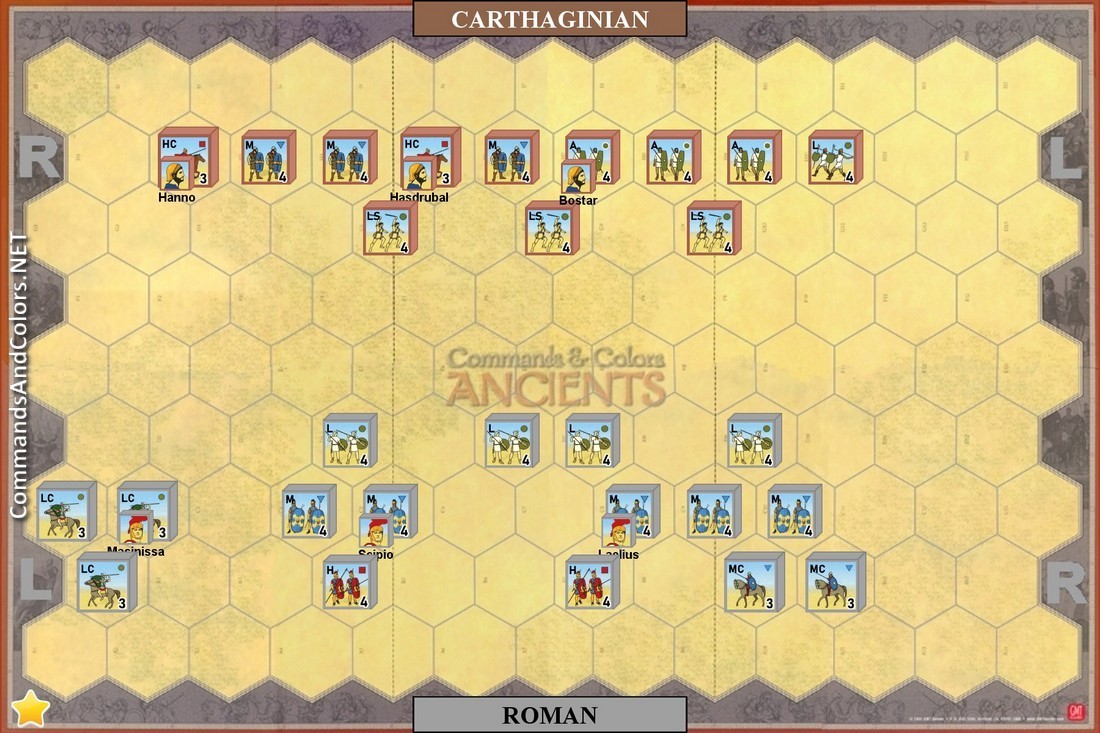 Valvorik replied the topic: #1991 3 years 6 months ago
Romans win at last 6:4, despite Carthage's heavy cavalry being used to good effect, line commands and double times move the roman foot with leaders in their midst come forward resulting in heavy Carthaginian losses in the centre.
Valvorik replied the topic: #1990 3 years 6 months ago
Another 6:4 Carthage win, this time the turning point being a "clash of shields" that takes out key Roman units in centre, and heavy infantry well-commanded doing well. Carthage's heavy cavalry never came into action. Solo play.
Valvorik replied the topic: #1982 3 years 6 months ago
Carthage was taking a beating, Rome 4:2, its centre having been driven into and its heavy cavalry destroyed, when a coordinated strike saw it wipe out two Roman units with their officers to get 4 banners, for a 6:4 win for Carthage - statistical fluke but such is war.

alecrespi replied the topic: #1516 4 years 7 months ago
Just played it tonight: Rome 6 - Carthage 5
Carthaginians had the chance to win with an all-or-nothing "mounted charge" on Heavy Cavalry... but dice rolls conceeded the victory to Romans.

Carthage was completely outmatched in this battle. Rome spent the first several turns laying down harassing fire that weakened the Carthaginian line. A combination of Move-Fire-Move, Green Units, and Darken the Sky really made this an effective move. Once the actual battle was joined, Carthage took the lead through a shock attack that pushed back Scipio's legion. Unfortunately, here and throughout the rest of the battle, Carthage could not eliminate many units but instead sent them retreating several hexes away. The other bright spot for them was Hasdrubal was again a powerful commander using his heavy infantry to crush Laelius and scatter his legion. This was not enough however to counteract the superior Roman fighting force.

Carthage opted to push against the Roman left this time, keeping themselves away from the bulk of the Roman force. It was quite effective as their medium units were able to cut off and then eliminate units, while Rome was struggling to respond. Hasdrubal was again an excellent leader. Though his heavies were cut to pieces, the back up medium infantry filled the role and cut through the Roman line. In my games, it seems that Carthaginian leaders named Hasdrubal are absolutely unstoppable. Rome fought back for a long time and protected its units, but the continuous onslaught broke them before the larger right legion could come into play.