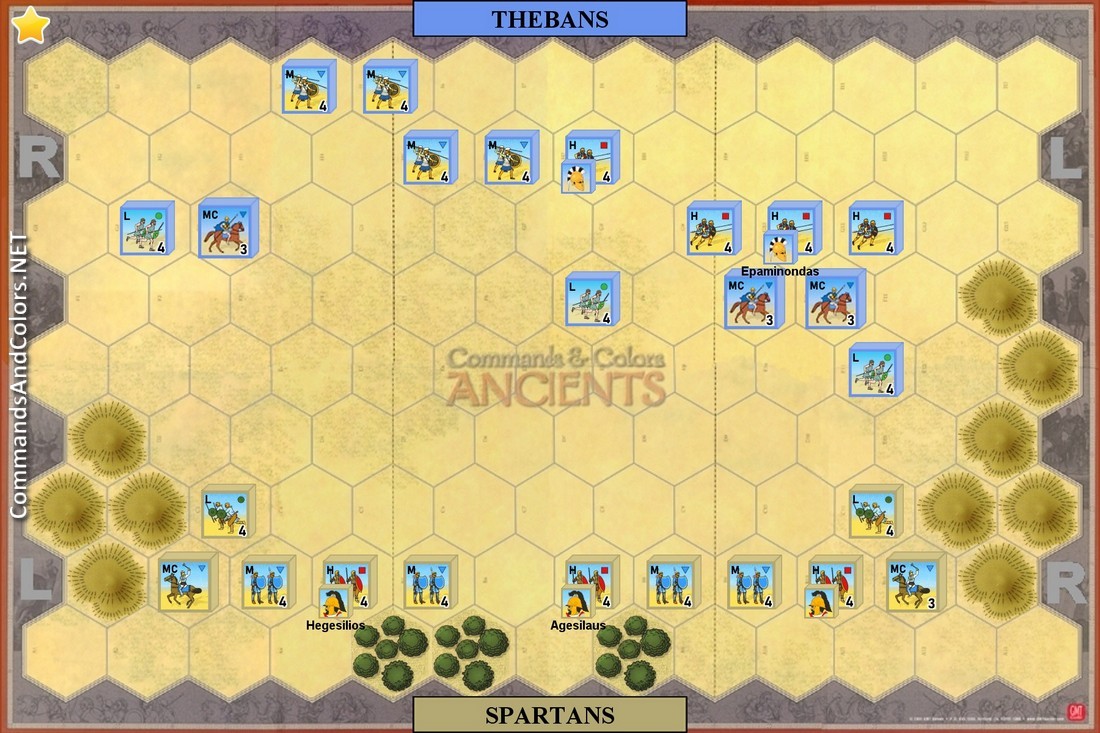 TomKnight3 replied the topic: #4081 6 months 3 days ago
We completed our 2021 CCA Tournament. In round 3, the Spartans won 6-3. On the second play (players switched sides), we had a very close and thrilling game.
Thebes got a 4-2 lead by using its heavies. The Spartan line was starting to fragment, but a Mounted charge added two VPs to tie the game. The Spartans also rolled four hits one turn later to take out a Theban Heavy. It was now 5-4 for Sparta. Thebes was able to kill a lone leader to tie the game again, but then Sparta pulled another Mounted Charge to win 6-5. A very good game.

TomKnight3 replied the topic: #4037 10 months 1 day ago
We played two more games (CCA 2021 tournament round 2), this time I was up against a different player. Thebes easily won 6-2 in a crushing victory in the first game. In the second game it was tied 5-5 with a chance for Thebes to win again, but the Theban Cav. could not push the Spartan mediums off the board, the battle back destroyed the Cav for a Spartan victory 6-5. Next my two opponents play each other to see who is the overall leader.

TomKnight3 replied the topic: #4036 10 months 6 days ago
We played two games back to back in our CCA 2021 tournament round 1. Thebes won 6-5, and then 6-4 (we switched sides). While Thebes I had some really good roles on leader checks killing two leaders, one on a double roll. While on the Spartan side I also killed a Theban leader on a double helmet roll. I guess it evened out. But, both games were really close. Both game the Thebans controlled the game from start to finish.
Valvorik replied the topic: #3282 2 years 3 months ago
Epaminondas laurels are tarnished or did a doppleganger show up. Four games say Spartans win 6-2, 6-5, 6-4, 6-2

poppo replied the topic: #3169 2 years 6 months ago
admittedly, there is no way how a proficient Theban player might ever lose this one: why is the scenario this balanced!? Thebans enjoy numbers, quality, territory

alecrespi replied the topic: #1512 6 years 4 months ago
Hi SimSportPlyr,
I'm sorry for the late reply.
I've just uploaded a bigger quality map picture.
What do you think about it?
Sadly all pictures have to be exported manually (1 by 1) to higher quality and then bulk updated on website.
If you guys think it's worth the pain... I'll plan this update for the months to come.
Let me know.
Regards
Ale
SimSportPlyr replied the topic: #1437 6 years 7 months ago
When I do a browser Save Image As on the map, I get a 78KB file, which is low res.
Is there a way to get a higher res version of the map and/or a unit type list?
Thanks,
Ralph

MasterChief replied the topic: #880 11 years 11 months ago
This was a lot of fun. It was very interesting how the middle game was just positioning and recovering from the little opening gambits. I don't think any of my games so far have had such a long period of positioning.

Tuscan-Centurion replied the topic: #875 11 years 11 months ago
Played this last night with Master Chief. I was Theban and he was the Spartans. Here's an AAR on the game.
An interesting smaller scenario that produced an intriguing game. Theban started with "Mounted Charge" by the 3 medium cav that targeted the 2 Spartan Light infantry. Hoped to pick up 2 quick banners. The result was 2 eliminated blocks for the Spartan infantry and a one block loss for the Theban horse. A quick counter, "Order 4 Units Left" by the Spartans had 1 Theban medium cav eliminated (0-1). Second turn had the Thebans pressing their cav attack against the light inf which eliminated it and evened the score (1-1). Then a number of turns was spent by both sides pulling back forward units and manoeuvring their troops into lines for a big push. Each side made the odd Ranged attack or small CC that raised the score to 2-2. The Spartans pulled back their whole line and waited while the Thebans slowly edged forward. Then a 'Line Command' card advanced the whole Theban line that pitched it into CC with half of the Spartan line. It cost the Spartan a light and a medium unit along with a leader (double helmets on the ldr casualty DR) and it was 5-2 to the Thebans. The Spartan then thought for a while to play 'Counterattack' and advanced what was left of their phalanx (2 heavies each with a leader and 2 mediums) at the Theban line. Took out the 3 Theban heavies to even the score (5-5). The Theban ldr managed to survive all this and it finally came down to an 'Order 2 units Left' card from the Theban to try and take out the last block from a Spartan heavy unit that survived the previous carnage. The Light infantry missed with their spears so the one remaining Theban Med cav charged and rolled a red square (and a sword) to take the game by the narrowest of margins (6-5). Cannot ask for better than that.