The dawn of Tuesday, 20 May, like many earlier dawns on Crete, gave back to the twisted olive trees their daytime grey and revealed beneath them men standing to their arms. As the light increased the noise from the company areas of cooks preparing breakfast grew louder, and the troops, the end of stand-to approaching, began to feel in their pockets for the cigarettes they would roll and soon be smoking. The air attacks that also came with the daylight seemed no more than an assurance that this day would pass like others. So at stand-down men merely grounded their weapons, lit their cigarettes, and sniffing the air from the company kitchens or cocking a wary eye upwards prepared circumspectly to join breakfast queues with their dixies. It would be another day of sunlight, of route marches with a swim at the end of them, of putting final patches to the defences, or of rehearsing company tactics on the olive-clad hillsides. There was scepticism enough for those who declared that today would be the day. (The Official History of New Zealand in the Second World War 1939–1945 Davin, D. M. ) The Battle of Crete was a battle during World War II on the Greek island of Crete. It began on the morning of 20 May 1941, when Nazi Germany launched an airborne invasion of Crete under the code-name Unternehmen Merkur ("Operation Mercury"). Greek and Allied forces, along with Cretan civilians, defended the island.
The Battle of Crete was unprecedented in three respects: it was the first mainly airborne invasion; the first time the Allies made significant use of intelligence from the deciphered German Enigma code; and the first time invading German troops encountered mass resistance from a civilian population. In light of the heavy casualties suffered by the paratroopers, Adolf Hitler forbade further large scale airborne operations. However, the Allies were impressed by the potential of paratroopers and started to build their own airborne divisions. This was the first battle where the Fallschirmjäger ("parachute rangers") were used on a massive scale. (Wikipedia). 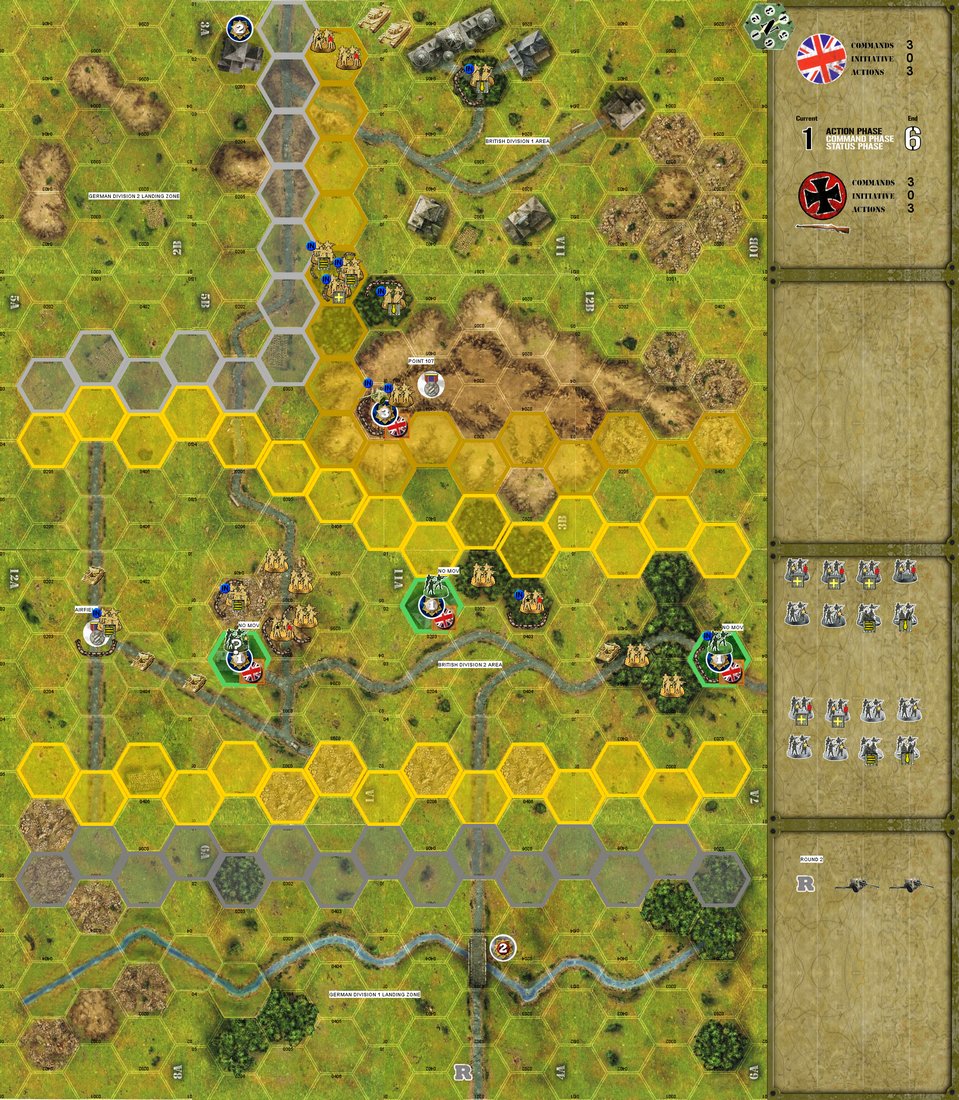 During the battle of Crete the Germans had complete air superiority. Few if any allied planes where based on the island. This is reflected in the scenario by the Bonus Air Support Cards the German player receives.

During the battle the British had near complete breakdown of communications. Most all of their phone lines where cut and the noise made it very difficult to communicate. This is reflected in the scenario by the special cost to move British units and the Operations cards.

One of the more interesting things about this battle, from a scenario design standpoint, is the near equal sized forces on both sides. This is fairly uncommon and made this a good choice for a balanced game scenario.

The Special Units on the British side represent forces that where present in the area that the British commander did not have control over. This is why they can't be moved. There was one platoon from 21 Battalion in the south and some air support personnel near the air field. The RAF personnel had received a little infantry training but not much. This the reason these squads are reduced strength.

The story of this battle is told in great detail at:
http://www.nzetc.org/tm/scholarly/tei-WH2Cret-c3-1.html

German Paratrooper landings require 1 action to land 2 squads. Additional actions are required to activate these squads. So for 3 actions you can land and activate 2 squads.