On July 25, 1944, after several weeks of near-stalemate, the Americans had broken through the German defences on the western flank of the Normandy beachhead, in Operation Cobra. On August 1, they seized Avranches. Over the next three days, no less than seven divisions of the newly-activated US Third Army under Gen. George S. Patton were pushed through the narrow bottleneck at Avranches, and fanned out through north-western France.
Hitler ordered an immediate counter-attack that would cut the Avranches bottleneck and isolate all the Patton´s troops in the west. The justified refusal of such a course of actions - assigned to weakened German forces facing both land and air American numerical superiority - from both Gen. Feldmar. Günther von Kluge and Gen. SS Paul Hausser proved useless. The operation was nicknamed Lüttich (Liege) and scheduled on August 7.
At night of August 7. the Luftwaffe bombed the town of Mortain as a prelude to the attack that followed in the thick fog of the morning. The 2. SS PzD. Das Reich under SS-Brigadeführer Otto Baum was ordered to sweep through the town with the 1. LSSAH rolling just north of it. However, the 30th Infantry Division under Maj. Gen. L. S. Hobbs, holding the town and alerted to the German attack by the ULTRA system, proved to be a worthy adversary for the SS-Panzerkorps.
The attack stopped in a desperate and bloody battle in the town of Mortain and when the fog dispersed quite quickly and unexpectedly at noon, the countless "hornets" of the American 9th Air Force soon caused heavy losses in the exposed German columns. The Germans were then eventually driven back by the armored American reinforcements arriving into the area.
The German force present is the leftmost flank of the offensive, consisting of two motorised regiments (the 2. SS-Panzer-Regiment and the 3. SS- Panzergrenadier-Regiment "Deutschland") of the 2. SS PzD. Das Reich. They approach the southern periphery of the town several hours after the main power of the 2. SS stormed the middle town and encountered fierce opposition.
As the battle in the town center still rages, the two panzer regiments are tasked to take the southern outskirt of Mortain and hold it against possible American counter-attacks.
The Americans awaiting in this area are two weakened regiments of the 30th Infantry Division. While all the dispensable infantry forces have been withdrawn to the center against the base line of the German attack, the 120th Infantry Regiment and the 105th Engineer Combat Battalion are ordered to defend the southern part of the town. 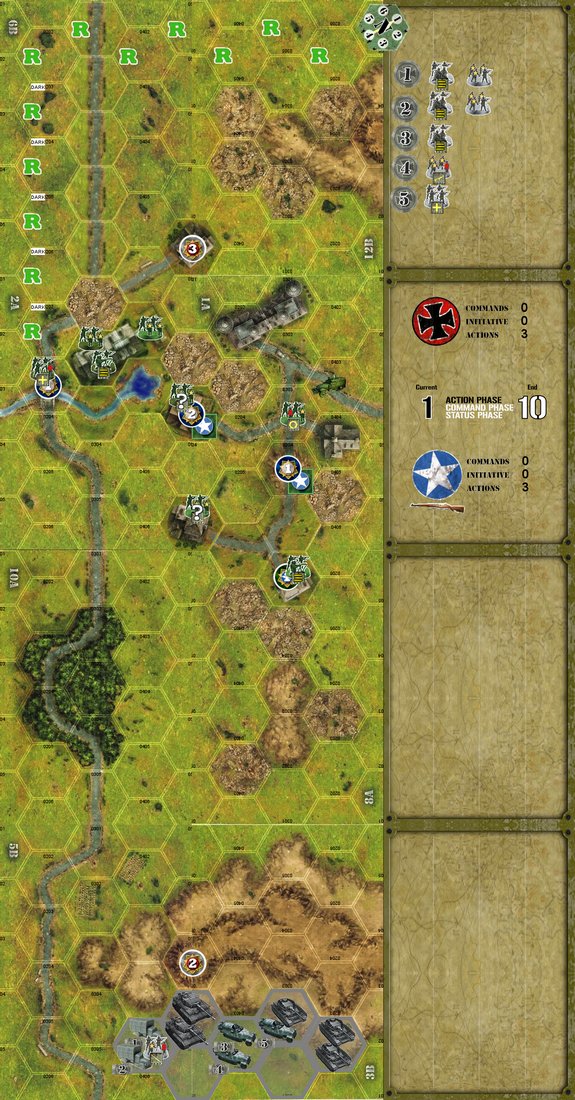 Wipe out the entire defense potential remaining to the Soviets. (Directive 41 issued to German Army generals)