In !940 The Germans attacked Holland, Belgium and France (Fall Gelb). The main goal was France. Heeresgruppe A made the first attack: Holland and Flanders/ Liege.
The German plan was to distract the French and British forces which worked out well. French and British troups rallied from Northern France north to support the Belgian forces in the north of Belgium. The Ardennes where hardly protected and the north of France had less troups to defend them. Near Sedan the French Maginot line ended and Sedan was a relatively weak spot in the defense of France. Heeresgruppe B, equipped with complete panzer divisions rushed through the forests and minefields of the Ardennes in two days and attacked Sedan. After heavy fights crossing the river Meuse, Sedan fell and wave after wave the German panzer divisions rolled into France. Von Manstein was the main brain behind this strategy. Guderian and Rommel were panzerleaders, these two just wanted to rush forwards to the English Channel in order to encircle the Allied forces. The German upper command halted them several times because the infantry and support troups could't keep up with the panzers and the flanks of the panzer divisions became vulnerable. Often Guderian and Rommel switched of their radio's and roared on. Guderian's quote "Klotzen nicht Kleckern" means something like: "Rush on, don't mind the details! 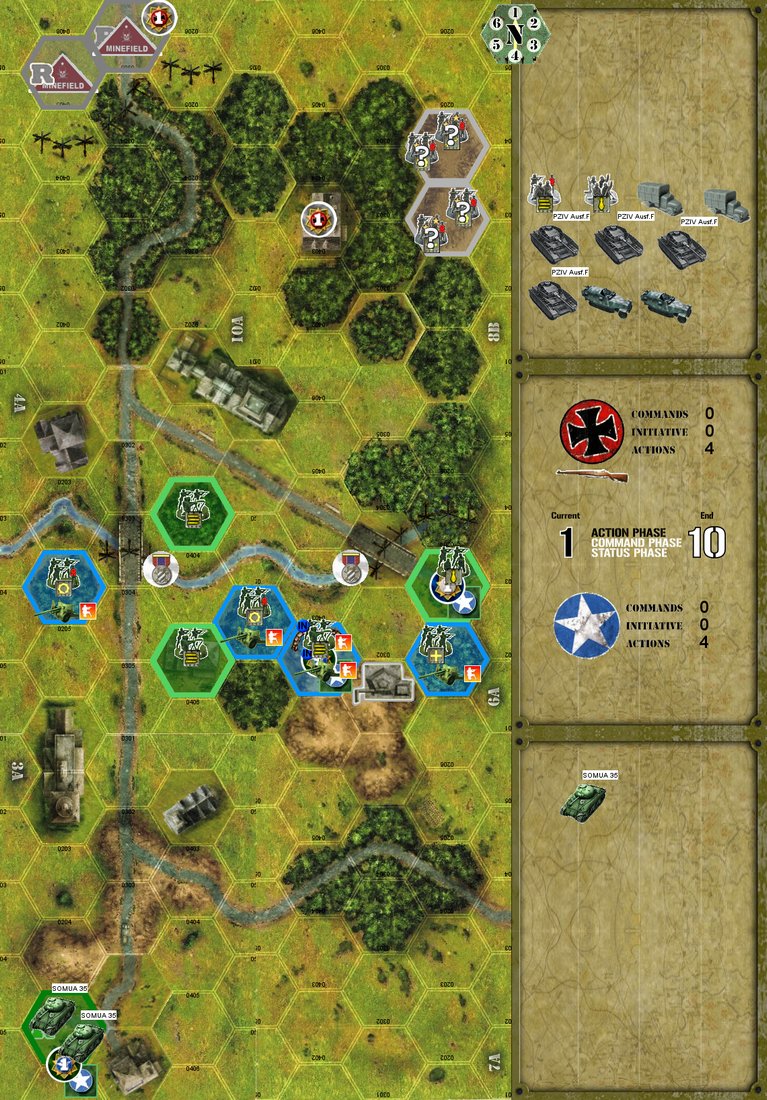 pino replied the topic: #608 11 months 1 week ago
I've done a simple test and that is the result:
The American player starts with 3 command points on their deployment positions and the capacity to fully deploy Division 1 on the Light Green Hexes and the 66% (2 of 3 Tanks) of Division 2 on the Dark Green Hexes.
The German player starts with no command points on their deployment positions and need 3 full turns to reach and eliminate the 2 minefields in the dark green hexes of map 10A with his Engineer's squad in order to deploy not more than the 50% of Division 2 at the beginning of Round 4.
Initiative is, as anyone could imagine, always for the American player.
Also, the german player has the need to remove also the Tank Traps positioned in front of the Minefield in order to permit the regular movement of veichle of Division 2.
So, in terms of play, after 5 turns, emploing all the engineer's squad of Division 1, the German player could deploy the Division 2.
In the meanwhile, the American player have scattered all his troops and armored units across the maps with no fear at all(German has only 2 "free" units to withstand the advance of the fully American Divisions), gaining ground and the control of the AT Gun in the entrenched positions.
So, the minor victory condition is to conquest both the Bridge (protected by Tank Traps and AT Gun positions in well covered hexes) 8 hexes far away in the last remaining 5 turns....i wonder how?
Read More...
Original Layout PDF (search for CODENAME).