Historical Background
After Cannae, Rome struggled to rebuild its armies, but needed time. In Spain, Hannibal’s brother Hasdrubal commanded an army large enough to possibly let Carthage win the war – if it united with Hannibal’s victorious veterans. Standing in his way, however, were the legions of two capable (at last) consuls, the brothers Gnaeus and Publius Scipio. Both knew of Cannae, but felt the only way to prevent encirclement was to quickly break the Carthaginian center. When the battle commenced, the Roman legions fiercely attacked the Carthaginian center, but , unlike Cannae, there was enough Roman cavalry to hold their flanks. Lacking cavalry superiority (and his brother’s tactical genius), Hasdrubal was unable to surround the Romans before they broke through his center. His cavalry joined the retreat, leaving the splendid heavy infantry to its fate. Rome was granted the time it needed to live and fight another day. Eight years later, Hasdrubal finally was able to march to Italy, but lost both his army and his life at the Metaurus.
The stage is set. The battle lines are drawn and you are in command. The rest is history. 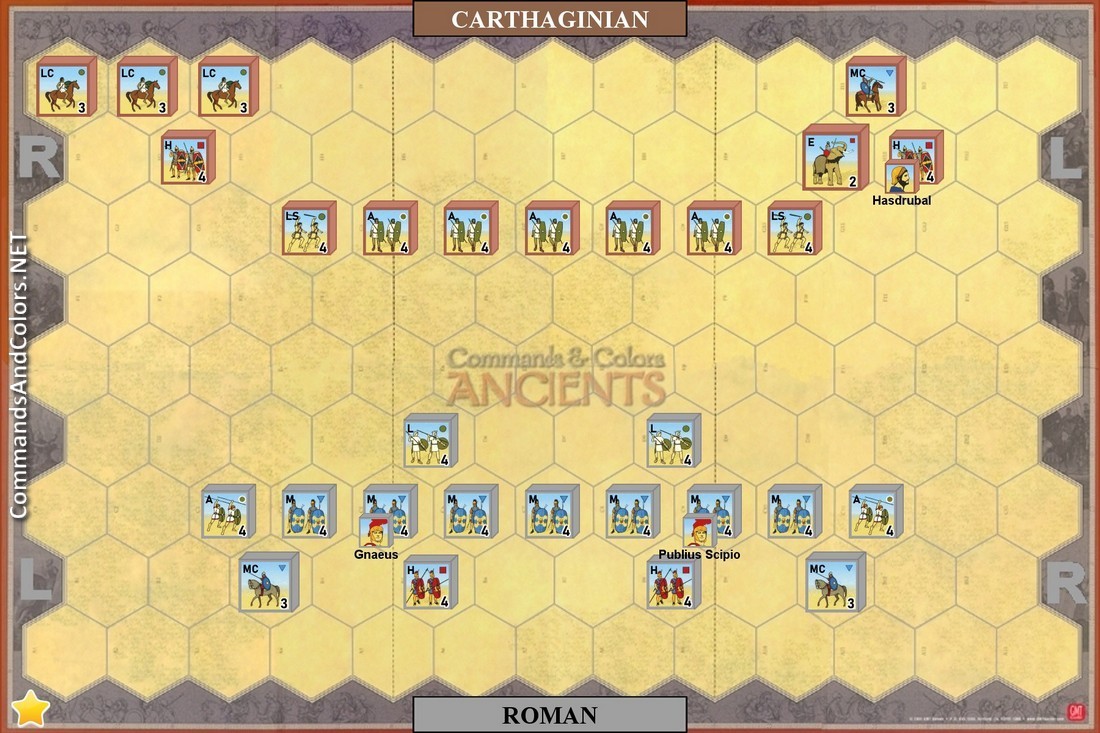 g1ul10 replied the topic: #1586 6 years 8 months ago
Played three times, with final scores (Roman-Carthage): 6-4, 3-6 and 6-2. The Carthagianian victory came from an effective elephant attack and a couple of blatant mistakes made by the Roman player (me).
Anduril replied the topic: #989 12 years 5 days ago
A Roman victory. The two armies basically matched each other blow for blow on the flanks, but that wasn't good enough once the Roman center started rolling forward.

The-Admiral replied the topic: #678 13 years 1 week ago
I am sorry if my comments caused any offence.

I do believe your results give a misleading picture of the scenario balance, but not that you personally set out to mislead, which is why I posted the results from Don Clarke's site to present a more balanced picture.

Yes you are correct that in any set of games on a particular battle any range of results is possible, but it is my personal opinion, that statistically such results are more meaningful if those battles are played by differing oponents. This does not in any way be-little your results that were honestly achieved and presented.

My expressed opinions are just my own and are frequently nonsense.

The Admiral
aka Jim Duncan

How many more posts do I need to get a promotion! and what rank will I be?
apergis1@verizon.net replied the topic: #674 13 years 2 weeks ago
Ken and I play Commands & Colors: Ancients on a regular basis. We like elephants. We like playing elephant scenarios. One of our favorites is Dertosa. We had played it twenty-two times. We have had similar experiences in playing the scenario as what were described in Alecrespi’s post of November 12, 2008 and Badweasal’s post of November 13, 2008. Since Ken and I recorded the outcomes, I thought if might be constructive to post our results. When we played, the Romans won 54.5454545% (I want to be accurate about this.) of the time.

Then a gentleman, whose handle is “The Admiral”, submitted a response on November 1, 2009. Even though he never played the scenario he implied that my entry was inaccurate and misleading. The basis of his position was his method for assessing battles.

He also cited that Don Clarke had post different results on his results page. Out of twenty-two games the Romans won 77.27272% of the time.

I am not an expert on playing C&C:A. There is no doubt in my mind that if I played the Romans in Dertosa against “The Admiral” twenty-two times, the Carthaginians would have won 77.27272% of the time.

I have spent the last week trying to think of an adult response to “The Admiral”, but I could not.

I do not believe in fighting battles that can not be won. I will not engage in a meaningless pseudo-intellectual debate in a vain attempt to justify my data.

“The Admiral”, I will let you have the last word.

The-Admiral replied the topic: #657 13 years 3 weeks ago
I have never played this battle, but looking at it I was rather surprised by your results.
I have a very basic method for assesing battles based on five criteria: Number of troops, quality of troops (objective I'll admit), number of leaders, number of command cards and who goes first. In this battle the Romans are superior in all aspects.
So I then Looked at Don Clarkes results page where by wierd coincidence there are 22 battle results listed with a very different picture.
Carthage has 5 wins (6-1, 6-2, 6-3, 6-4 and 6-5)
Rome has 17 wins (6-0 x2, 6-1 x4, 6-2, 6-3 x6, 6-4 and 6-5 x3).

This is exactly what I would expect from an initial perusal of the battle. I know playing can make a big difference.

The battle initially seemed to be going the way of the Carthaginians. The auxilia and slings in the center were constantly providing range fire to harass the Roman line. No Roman unit was able to make it intact. As such, there was only a single battle between infantry in the middle. The Romans kept pulling their weakened units away to prevent their elimination. Fortunately, the Roman crushed the Carthaginians. Given a couple more turns, Carthage may have pulled it off, but they were too fearful of the legion to close with their auxilia.

The Carthaginian left flank was devastating this time. They completely destroyed anything the Romans threw in their path. The initial impact of the elephants severely weakened the line, which was quickly exploited by the medium cavalry and the heavy infantry led by Hasdrubal. Again the Carthaginian center prevented the Roman legion from approaching in strength. The effective use of range fire in this battle really can give an advantage to the Carthaginians. The only unit the Romans managed to eliminate were the elephants which essentially are kamikaze troops anyways.

for Carthage?", you'll wonder. Don't. Used properly, the Carthaginian flankers will crush the Romans with ease. I won this handily, 6 to 1, without moving the Carthaginian infantry line at all and firing from it exactly once. Your true slaughter-makers are the elephants and heavy infantry; waste no opportunity to move them forward and engage aggressively.
The Romans, on the other hand, want to close with the enemy line. where their mediums will have the weight advantage. They need to use their light troops to disrupt the enemy cavalry with fire combat; this is especially true on the right flank, where the enemy elephants will wreak havoc if they aren't maddened into rampage and retreat.

This one plays fast. Do it as a flip-flop set.
Read More...