Historical Background
By 309 BC, all of Alexander’s heirs had been executed. The Successors ended the pretense of fighting for the restoration of the empire, and proclaimed themselves kings. With the most powerful army of all the contenders, Antigonus made a bid to reunify the empire under his dominion in 302 BC. The other four Diadochi kings had formed an alliance to stop him. The allies met Antigonus’ army near Ipsus. The armies were evenly matched in foot, with the allies superior in horse and greatly superior in elephants. As the battle began, Antigonus’ cavalry charged against one of Seleucus' cavalry wings, routing it. Unfortunately, the Antigonid cavalry pursued too far, and then could not re-enter the battle because they were blocked by Seleucid elephants. This left Antigonus’ phalanx unsupported as the allied phalanx charged forward. Overwhelmed, Antigonus was killed and his phalanx broken. The remaining horse and some of the foot escaped, along with a young general who would make his presence felt later – Pyrrhus. With three kings and three future kings present, this had truly been “the Battle of the Kings.” The 81-year old Antigonus had never before lost a battle. His defeat and death brought an end the first phase of the Successor Wars and dashed any hope that the empire would be reunified.
The stage is set. The battle lines are drawn and you are in command. The rest is history. 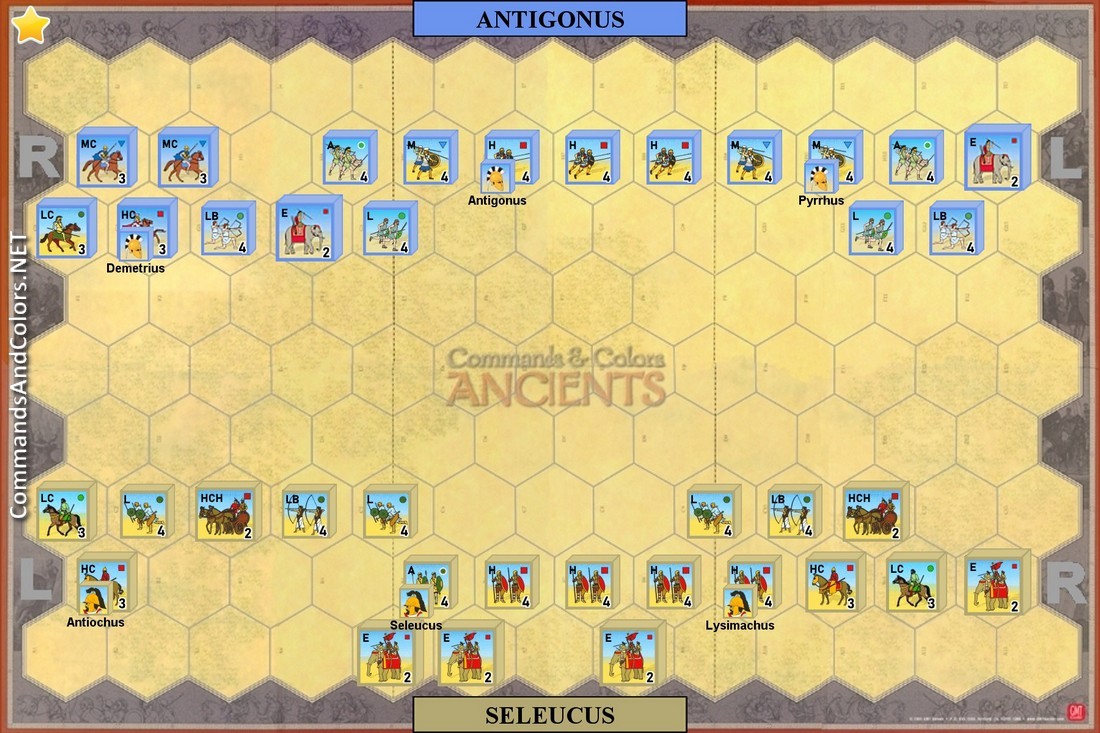 Special Rules
Seleucus brought 400 elephants from India to the battle. You will need to deploy a Roman or Carthaginian unit of elephants from the core game as the fourth elephant unit of the Seleucid army.

Stanislav27 replied the topic: #2412 2 years 1 month ago
My frequent C&C:A buddy, Mikkel (Antigonus), and I (Seleucus) had a very exciting bout at the Battle of Ipsus.

After some initial maneuvers, the first significant clash of the confrontation occurred on the Seleucid left flank. I had boldly (or foolishly?) committed all of my left-wing light cavalry and light infantry in a forward charge in that sector. The effect was as intended, tempting my opponent to respond in force, drawing him up the field and evading his attacks.

The feint was not without sacrifice, as I lost a whole unit of light bow infantry, but the trap was sprung and he pressed on. I held Mounted Charge from the start and now a good chunk of the Antigonid right flank was within range of my left-wing heavy cavalry, chariots and elephants. The effect of this counter-strike was devastating, obliterating my opponent’s left-wing cavalry entirely. I also employed the Mounted Charge in the right wing, scoring a single victory banner against a unit of medium infantry. Still, Antigonus’ troops did go down fighting, and both of my squadrons of heavy chariots were destroyed by the time these dramatic flank clashes were concluded. I was up by 5 to 3 banners, but many units on my flanks had taken hits (with my right-wing heavy cavalry falling soon afterwards). Everything was still in the balance, but I was happy to keep an advantage in horses as well as elephants on both flanks.

After such an action-packed start, things slowed down as the two central formations tried to bait each other into action with careful maneuvering. I was weary to commit, holding an Order Heavy Troops and wanting to bring my elephants in against the heavily armoured phalangites. After some probes on the flanks with missile troops, I began to lose patience and commenced moving my elephants from the rear towards the left so as to bring them closer to the action. The Antigonid general seemed weary of my entire army moving up and pressing him towards his edge of the battlefield. Seizing upon holding both Double Time and Clash of Shields in his hand, he double timed forward with his heavy infantry, going for the kill. My line was tested with many a brave soldier falling, but only one unit collapsed in its entirety. Subsequently, I counter-attacked with both my heavy infantry and two of my elephants. The consequences were catastrophic for the courageous Antagonids and his potentially game-winning Clash of Shields never materialized. The mass of men and beasts crushed the advanced line of heavy infantry and all hope was lost when the 81-year old Antigonus was slain in the process.

Very entertaining clash with lots of different unit types and potential strategies. Mikkel was perhaps a bit too aggressive in the final advance, since I had the upper hand in slow-moving but hard-hitting cavalry/elephants that were so effective against the massed, heavily armoured pikemen. The most satisfying moment for me was wiping out his right flank cavalry, which I had deemed the biggest threat from the start (with history as my guide). But I do feel that this one can go either way and it is a good battle for an epic, relatively well-balanced feeling when there is not enough to time to play the game twice (as was the case this afternoon). 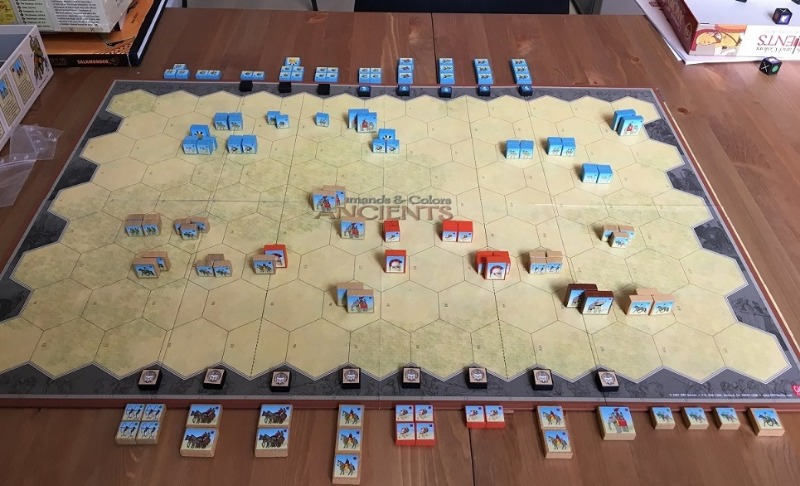 alecrespi replied the topic: #377 11 years 4 months ago
Eric S. Raymond wrote some comments about this scenario on his webpage. CLICK HERE to read full article.

This was the so-called "Battle of Kings", a pivotal confrontation in the Wars of Alexandrian Succession. I played the Seleucids. Antigonus's cavalry-heavy right moved aggressively against my left, which is what happened historically and completely logical given the order of battle. Ahistorically, my left got handled pretty roughly but did not entirely collapse. The Antigonids later sortied against my right flank and knocked it around pretty seriously as well.
As in the original battle, moving my heavy infantry up the center proved decisive; they inflicted critical losses on the opposing line. My opponent cooperated by using a line command to move his center forward; I think, in retrospect, that this was an error.
I think my opponent's attempts at flanking were entirely correct. The Antigonids need to hit hard, fast, and early while the Seleucids have no retreat room. The OB gives the Seleucids a significant advantage in a general engagement, especially if they can deploy the elephants in their rear line effectively.

This scenario favors the Seleucids slightly, especially since they start with 6 Command Cards

to the Antigonid 5. I don't think I'd change it, though; good tactics and execution by the Antigonids can negate the Seleucid advantage, and that challenge is what this scenario design is about.
Read More...