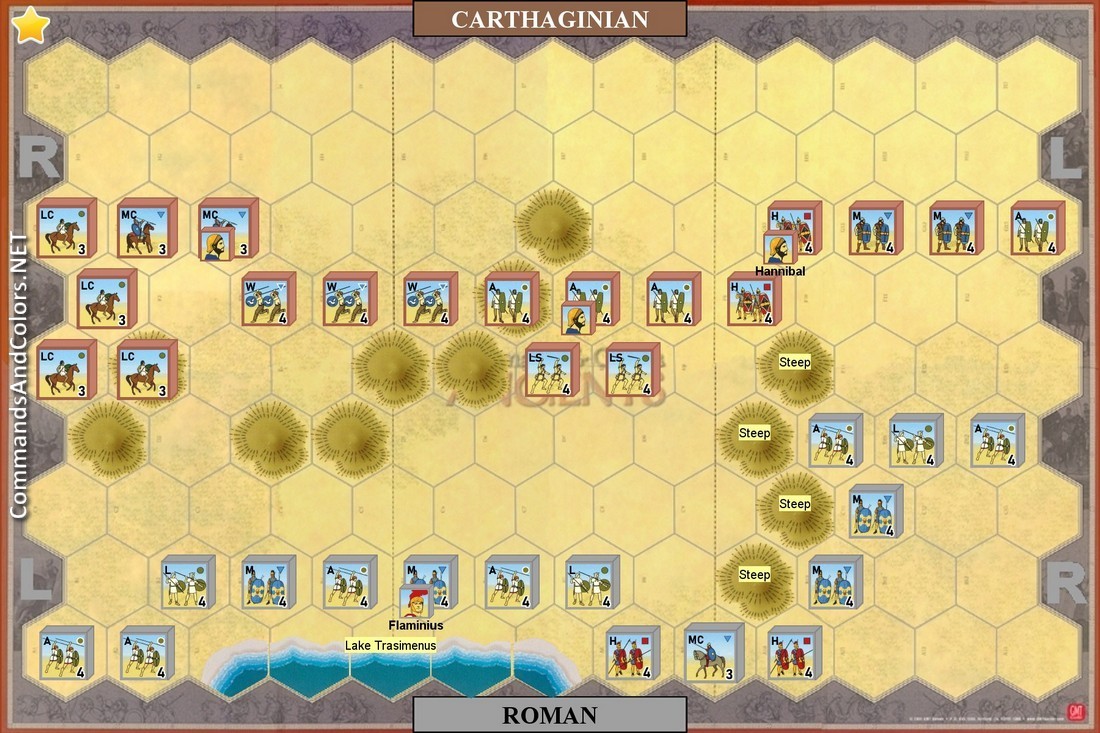 Warboard replied the topic: #3875 1 year 9 months ago
6:5 Carthage win, barely. It could have gone the other way. Didn't feel imbalanced, some people complaining about balance should maybe play chess instead. While highly stylised, this system does base itself on historic battles, maybe Hannibal could have warned the Romans and give up on his ambush to make everything fair. In any case, a superb scenario and great fun!
Novak replied the topic: #2809 4 years 3 weeks ago
2 plays. First Carthage win handily, 6-3 destroying Roman right flank. Roman left and Carthagian right were static for most of the battle while the action happen on the other flank.
Second game went to Rome 6-4; Roman left flank stopped Carthagian cavalry charge and inflicted serious damage there. In ensuing slugfest Rome pulled a (partly) lucky win.
GF1954 replied the topic: #2684 4 years 4 months ago
2 solo plays: Carthage winning 6 - 2, and the Romans winning the second 6 - 3. In the first, a well timed calvary charge by the Carthaginians on the Roman left flank was the deciding factor. While in the second, the Romans broke through on the right flank and destroyed the Carthaginians units there.


That is exactly how that battle looked like. No need for additional Carthage banners - the set-up reflects the real, historiucal Roman disposition and yes, that is very, very weak position...

Dylan Dog replied the topic: #1782 6 years 3 months ago
Solo Play: Carthaginian won 6-4. Despite only +2 banners for Carthaginians I find this scenario as heavy unbalanced. Cartaginians are too strong, no evade chances for Roman units and the Roman strong right flank troops never came into play effectively.

religon replied the topic: #1009 12 years 2 months ago
This scenario is very surprising. It does look hopeless for the Romans, but it is not.

The best strategy for the Carthaginians seems to be to press in the center while protecting the cavalry units.
Anduril replied the topic: #951 12 years 3 months ago
A complete blowout for the Carthaginians, with the Romans failing to take a single flag. The Roman center first advance, losing Flaminius in the process, then the Roman right advanced but failed to break through. However, while the Carthaginians won decisively, it was a near-run thing - six of its units lost half or more of their strength and if the Romans had been able to push just a little harder it would have been a very different battle.