Lt. Taylor's Bravo Company has encountered German forces at Ormel Farm. Lt. Parker's 5th Rangers will arrive at the end of 5 turns to reinforce Taylor, but the Americans must be in control of Ormel Farm when they arrive or they will have no chance of keeping the German reinforcements from reaching their battered troops at Vierville and Omaha Beach. 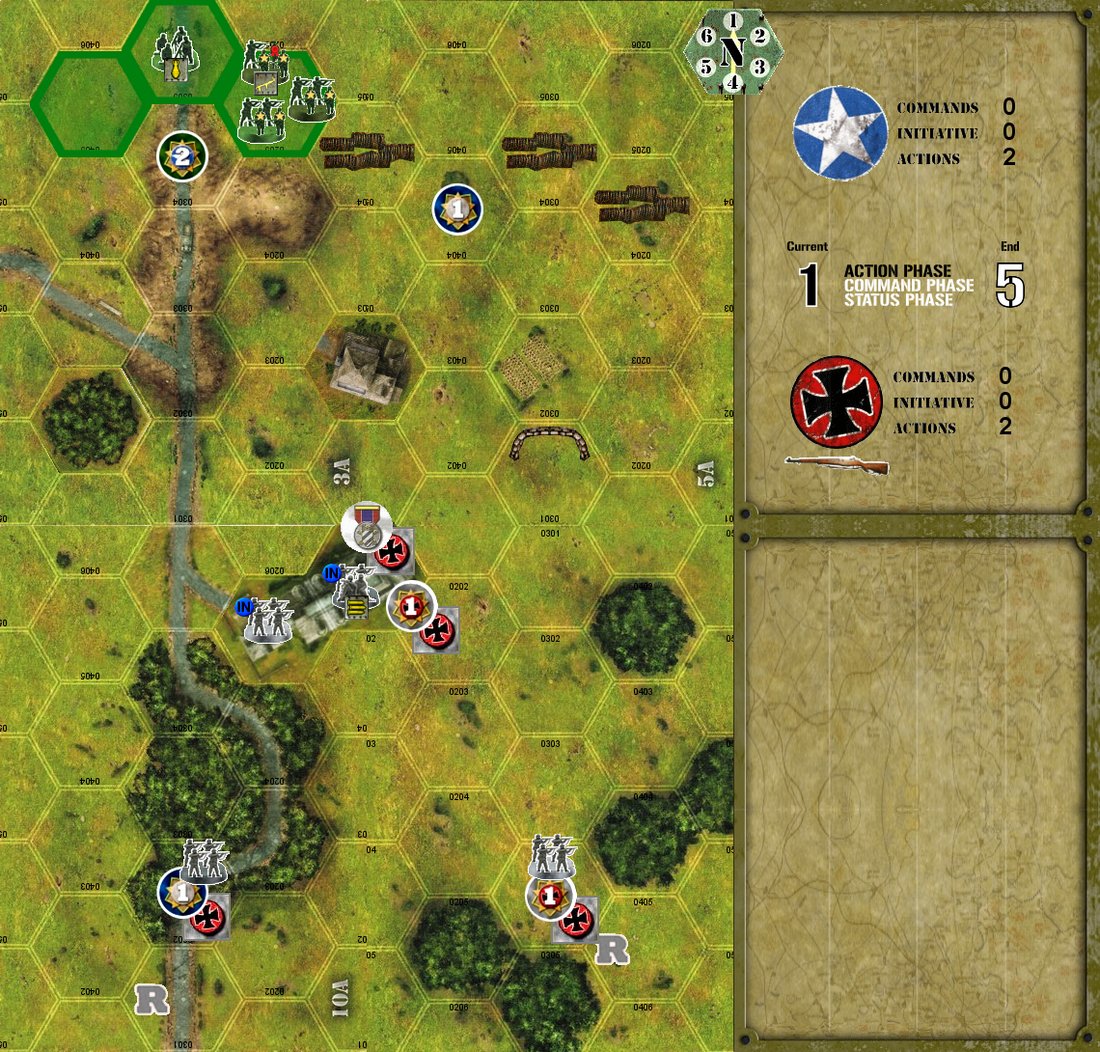 About five-hundred yards to the south of the French village of Vierville lays Ormel Farm; an imposing rock-walled castle like structure mistakenly labeled as the "Chateau de Vaumicel" on the maps supplied to the Allies during the assault on Normandy. In the days leading up to D-Day, the Germans had created a network of entrenchments and artillery proof tunnels at the farm which in conjunction with massive stone walls and hedgerows surrounding the farm s fields made the structure a seemingly impregnable fortress. Ormel Farm was a key defensive structure for the Germans because as long as they were in control of this location, any Allied soldiers that managed to survive the assault on Omaha beach would not be able to safely reach their staging area south of Vierville and German reinforcements would be able to move from Vacqueville to Vierville and Omaha Beach without interruption.
Despite having landed over 5,000 fighting men on French soil, the Allies had sustained incredible losses, severely weakened morale, and due to heavy losses amongst the officers, completely lacked any sort of cohesive leadership. Success at Omaha was only achieved because of the initiatives of a few brave men such as Lieutenant Walter Taylor from Baker Company of the 116th Infantry.

After landing on Omaha beach, Taylor and his surviving squad members climbed the bluffs into the village of Vierville and defeated a German Platoon without losing a man. In Vierville, Taylor met up with a few other Bravo Company survivors and was informed that their commanding officer had been wounded and that he was now in command of the remnants of Baker Company. Taylor led the 28 surviving members of Baker Company south until they reached Ormel Farm. About one hundred yards outside of Ormel Farm, the Americans were fired on by German machine guns behind the well fortified entrenchments surrounding the farm. Taylor and his men used a combination of cover and suppressing fire to get within 25 yards of the enemy and began lobbing grenades at the Germans in front of them. The Germans panicked and came out of the entrenchment screaming with their hands in the air. Taylor took the Germans prisoner and continued south towards a crossroad near their staging area when his unit was enveloped by three truckloads of German reinforcements from the 916th Grenadiers. In a brief firefight, Taylor lost a man and had several wounded. Down to a fighting force of just over 20 men with no automatic weapons, Taylor fell back to the safety of Ormel Farm's stone walls. The men of the 116th defended the farm for several hours, making effective use of the slits in the stone walls, and held back the enemy counter-assaults with rifle fire.
Ormel's stone walls provided a strong defensive position, but the continued combat had reduced Bravo Company's ammo supply to a critically low level. Relief came at sunset when Lt. Parker and a squad of the 5th Rangers joined in the defense of the farm, forcing the Germans to fall back, keeping the reinforcements from reaching the battered troops in Vierville and Omaha Beach.

Ormel Farm is designed as an introductory scenario for players that are new to Tide of Iron. It is my hope that the rules and tactics learned in this scenario will act as a foundation that players can build from without being overwhelmed by everything that Tide of Iron has to offer all at once. At the same time, I tried to provide enough depth to keep the scenario interesting for veterans so that they can use the scenario as a teaching tool without becoming completely bored after repeat plays. The scenario provides immediate action and is short enough to be played multiple times until new players feel ready to move on to more advanced scenarios.