On August 20, 1944, a hodgepodge of retreating German forces, including heavy Tiger tanks, medium Panzer IV models, and hordes of demoralized but desperate Nazi soldiers, attacked the U.S. 359th Infantry Regiment at the town of Chambois in order to secure the bridge and their escape route. Despite being pounded by the 90th Division's artillery in the Forest of Gouffen, the Germans launched repeated attacks throughout that day to secure the bridge and the road leading to it. 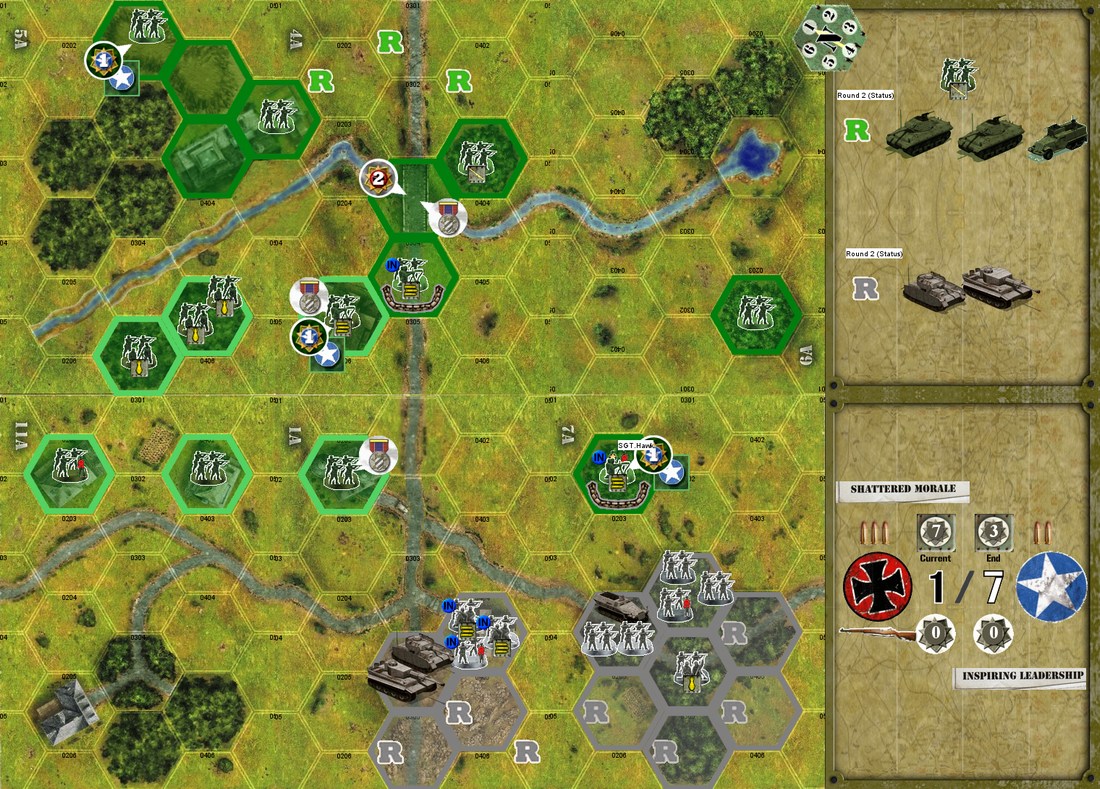 Plastic World War II army men and tanks. WWII movies on the local television channels, along with the TV series Combat! and Rat Patrol. Both my parents served in The Big One: my father as an infantry captain, my mother as a WAVE. These elements provided a not unusual background for a kid born in 1958, growing up in the American suburbs.
But it took the discovery of the board wargames published by The Avalon Hill Game Company and, in the early 70s, Simulation Publication Inc. (SPI) to set me on the road to my odd career as a wargame designer. Although my first attempts at designing wargames were in 1970, it wasn't until the 1990s that my first professional published titles appeared.
Still, almost four decades as a wargamer apparently counts for something, for I now count nine Charles S. Roberts Awards, a Best Historical Game of the Year award from Games magazine, and various other hobby honors to my credit. With about 16 published titles, I've become a professional in my childhood hobby.
Still, it started with plastic army men and tanks, something Tide of Iron has in abundance, along with beautiful game maps, cards, and game counters. So when Dana Lombardy asked me to do a scenario for TOI, I (metaphorically) jumped at the chance. Despite that, I did have some last-second hesitation.
My previous designs have been mostly strategic or operational: armies, corps, or divisions rather than squads, companies, and battalions. And I made my name largely as a designer of games of the First World War, not the Second.
TOI is a tactical WWII wargame, not a prettier version of Risk, and definitely outside my traditional area of design.
But there were two things in my favor.
The first was that I was asked to do just a scenario. TOI was already complete, and successful. I didn't have to think of a way to model WWII squad level combat — others more qualified had already done that.
The second thing that got me over my self-doubts was the realization that TOI was in fact a design after my own heart: if I had ever done a game system on this topic, it might have looked very similar. Broadly speaking, I think there are two basic schools of wargame design. Call them the Scientific vs. the Artistic. Or Simulation vs. Game. Or Realist vs. Impressionist. Under whatever name, one school puts the emphasis on numbers crunching, detailed mechanics, and modeling as many aspects of the subject as possible, while the other goes for broader strokes, narrative flow, and ease of play. (I don't mean to imply these views are completely exclusionary — many designers draw from both schools — but most games fall more towards one camp than the other.)
I'm an Impressionist (with apologies to both Monet and Rich Little). In wargaming's early days, advertising promised to put YOU in command, or turn bits of cardboard into Paper Time Machines, and I have always felt that a good wargame should have a strong element of role-playing (minus the dragons and elves).
Tide of Iron offers game "magic" — the 3-D armor and infantry moving across beautifully painted fields of fire.
Throw in the Strategy Decks and Operations cards and you have a nice feel for the chaos of tactical combat along with that vital element of role-playing. So, doubts vanquished, I was happy to create a scenario.
Narrowing it down to just one engagement took a little time. I was looking for something dramatic but also at least somewhat balanced, where either side could win. I finally decided on the fighting at the French town of Chambois, on August 20, 1944. It was the last day of the larger battle that saw the remaining German forces in the Falaise Pocket squeezed from all sides, under constant fire from Allied artillery and airpower. At Chambois, disorganized German units from a jumble of divisions tried to break through the Allied forces attempting to block their escape. It was a hard fought contest in which Allied firepower and courage won the day against the steel skins of the German Tiger tanks.
It was also a battle in which American Sergeant John Hawk won the Medal of Honor. With the modesty typical of the breed, Sergeant Hawk always claimed that he was just one of many men doing their best that day. So, I dedicate this scenario to John D. Hawk, and all the others whose courage helped defeat the Nazi scourge.

For almost two months after the Allied invasion on June 6, 1944, the American army was still fighting a grueling battle of attrition through the dense hedgerows of Normandy.
But in late July, Operation Cobra fmally cracked open the German left flank, and tanks of Patton's 3rd Army broke free into France. Following the failure of a German counterattack in early August to stop the breakout, the Allied advance threatened to trap both German armies in Normandy (the 7th Army and 5th Panzer Army) in a pocket between the towns of Falaise and Argentan.
By August 20, the pocket had been sealed. The 359th Infantry Regiment of the American 90th Division (a former , `problem outfit" only now showing the improvements that would eventually make it one of the best U.S. divisions in Europe) linked up with elements of the Polish 1st Armored Division at the town of Chambois. The town's bridge over the River Dives was one of the few German escape routes to the east. The Dives was not a major river, but it was enough of an obstacle that the German tanks and other vehicles trying to cross it had to do so at a few select bridges and fords — crossing points now under Allied control.
Most heavily engaged was Company E of the 359th, which included a machine gun detachment led by Sergeant John D. Hawk. Hawk was in a forward position in an apple orchard, and he soon found himself facing attacks from German Tiger tanks supported by infantry. He drove the infantry back, but was wounded by an artillery shell in the thigh, lost his machine gun, and was forced to retreat. Despite his wound, Hawk found a bazooka, and his fire forced the Tigers back into the woods. Using parts from two damaged machine guns, he put together a single working gun, but another German armored assault caused him to retreat once again. With the situation hanging in the balance, Hawk then directed the fire of two newly-arrived M-10 Tank Destroyers against the German tanks, taking out two of them and forcing a third to withdraw. Under Hawk's direction, the M-10s then fired into the nearby woods, and soon some 500 German soldiers emerged to surrender. For this action, Hawk was later awarded the Medal of Honor.
Although some German units would escape that night with the help of a counterattack from outside the pocket, by August 21 the battle of the Falaise Pocket was essentially over. More than half the German forces in Normandy had been destroyed, and the rest escaped at the cost of virtually all their tanks, vehicles, and heavy equipment. There would be no stopping the Allied advance now until it reached the fortifications along the border of Germany.

You only have to kick in the door and the whole rotten structure will come crashing down. (on invading the Soviet Union)