The Battle of Attu took place between 11 and 30 May 1943 on the island of Attu in Alaska as part of the Aleutian Islands campaign during the Pacific War in World War II.
Fought entirely between the Japanese Empire and the United States of America, it was the only land battle on the Pacific Front to be fought in a territory that was part of the island areas of the United States.
The Aleutian Islands constituted a kind of road that connected the North American continent and the Far East, along the shortest route between San Francisco and Tokyo, and their strategic value was evident to both sides.
The Japanese on June 3, 1942 launched the attack on the Aleutian Islands and on June 7 a small Japanese invasion force landed 1,800 men on two of the three islands that represented their target, namely Kiska and Attu, and occupied them without encountering resistance.
On 11 May 1943, the Americans landed on the beaches of Attu, protected from the fog and fire of three support battleships, even if Kinkaid's Task Force 16 was severely limited by the presence of the fog, which however caused a favorable surprise factor.
The departments that landed in the afternoon landed in the "Bay of Massacre" and at Punta Alexai, west of Holtz Bay, while other landings took place the night of the following day.
The American troops, while not finding resistance on the beaches, were immediately engaged as soon as they advanced towards the Jarmin Pass, where they were blocked by the fire of the Japanese stationed on the hills around the pass.
Despite benefiting from an overwhelming numerical superiority (the United States had by now landed more than 11,000 men, while the Japanese remained about 2,380 effective) and from the unchallenged air and naval support on May 30, after brutal hand-to-hand clashes, the Americans managed to annihilate all the Japanese forces on the island.
The conquest of the island cost very dear to the Americans, who left 549 dead and 1140 wounded on the field only on May 29, while on the Japanese side the situation was much worse, the whole garrison defending the island, 2380 men, sacrificed themselves, with 2352 deaths, 500 of them suicides, only 28 wounded survived as prisoners. 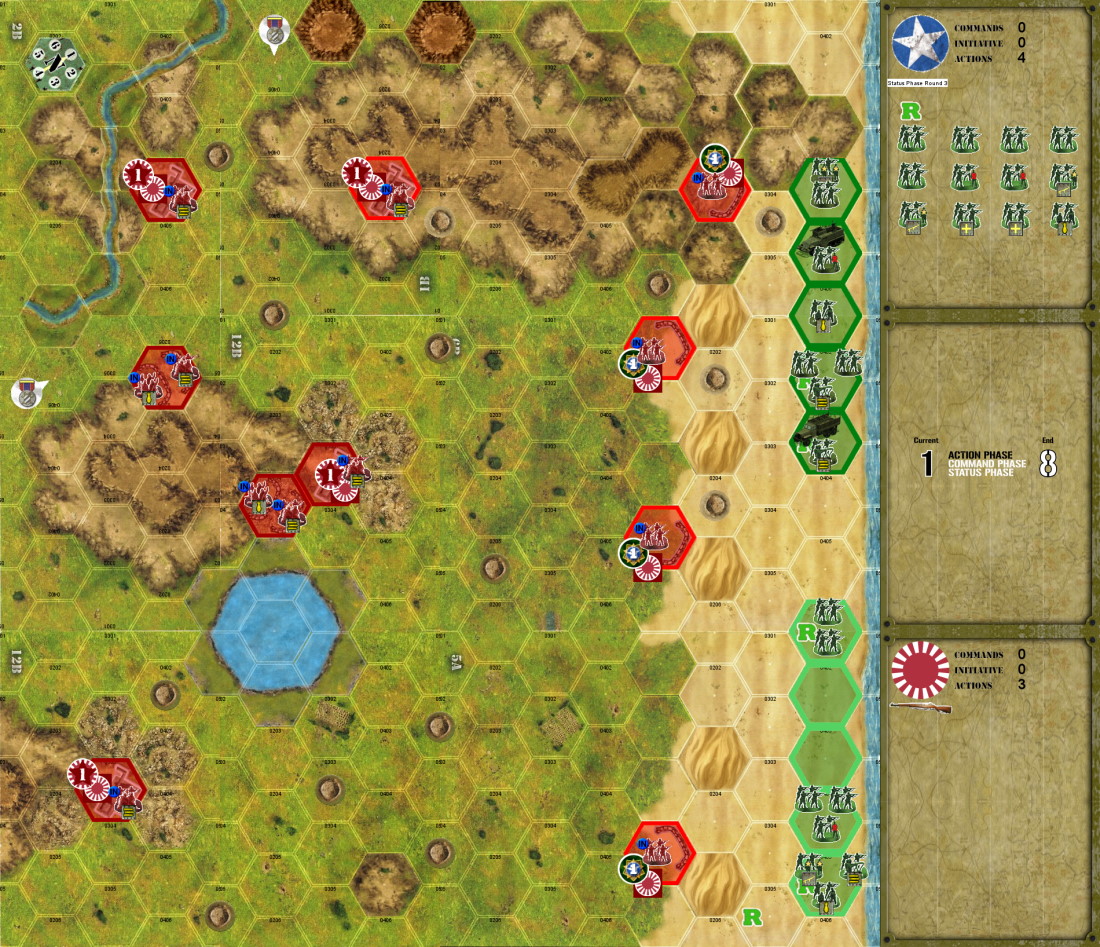 alecrespi replied the topic: #878 1 month 3 weeks ago
In this boardgame all map boards are double sided, as to say you have board 10 with side A and side B.
Usually scenario boards are assembled using either side but Vassal allows using the same board multiple times.

So in this scenario you will have this map board distribution: 3 rows and 4 columns (12 map boards)Map boards with leading "P" are from unofficial Pacific expansion so you can print them multiple times if you need in real games.
You can find all contents for the Pacific expansion in Download section .

I hope this can answer your question.

Flintstone47 replied the topic: #877 1 month 3 weeks ago
I copied the map boards from the aticle but there were no "B" side sheets to copy

Flintstone47 wrote:
Where do I find the "B" side of the map boards?


Hi I think I didn't get your question...
Every map board has two sides (A and B).
What are you missing exactly?

Flintstone47 replied the topic: #872 1 month 3 weeks ago
Where do I find the "B" side of the map boards?
Read More...
Original Layout PDF (search for CODENAME).

The Germans should have thought of some of these things before they began the war, particularly before attacking the Russians.  (referring to a German soldier's request to surrender only to British or American forces and not the Russians)