After heavy artillery fire last night the nearby town seems deserted and clear for takeover. American commander sends few platoons supported by a half-truck to capture abandoned German HQ on the other end of the town. 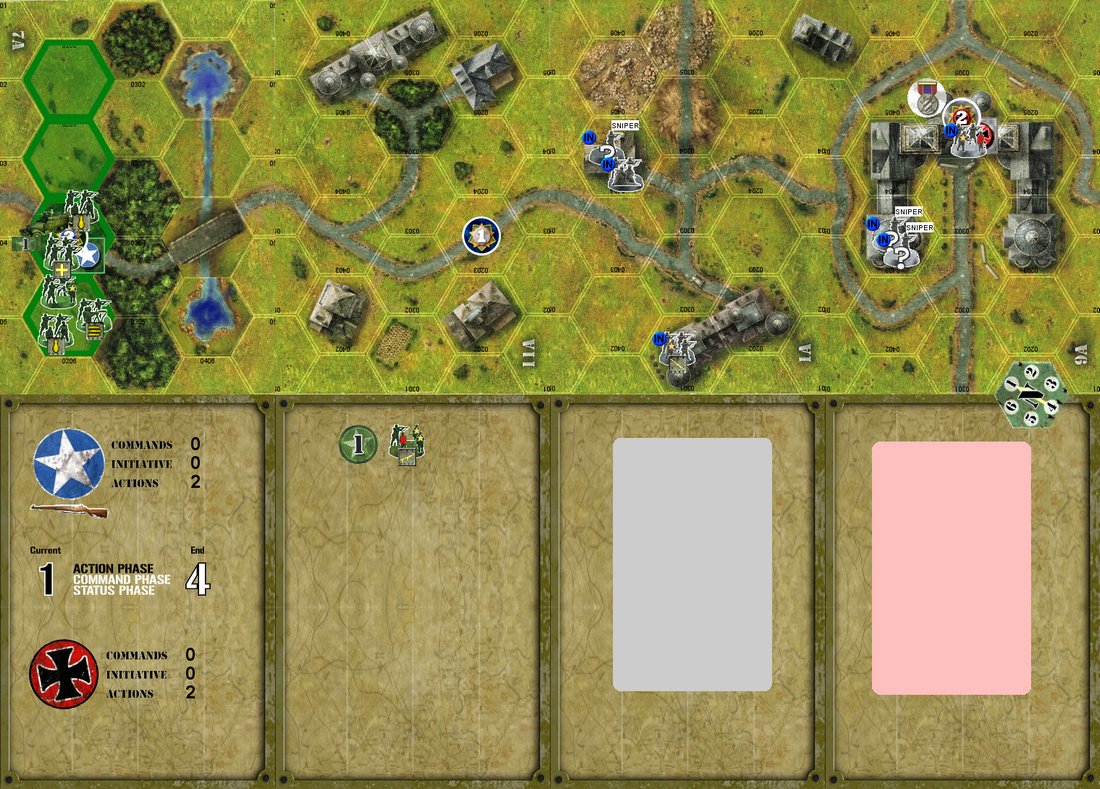 The following is a strictly unofficial, fan-created set of rules enabling to diversify game s options and add new flavour to your scenarios. A Sniper unit consists of a squad base filled with only one regular infantry figure and token identifying the unit as sniper (put in place of standard specialization token). You can use one of your  pinned/disrupted markers to mark sniper s squad base, just like you d do with a specialization token.
For the use of standard game rules sniper unit ( Sniper ) is considered to be a squad , although it can always consists of only one figure and in fact represents a single soldier on the battlefield, (yet, e.g. the standard stacking limits still apply sniper is counted as one of maximum three units occupying one hex).

Sniper s movement is executed according to standard movement rules for squads (including ability to be transported by a vehicle).

Since sniper is equipped in scoped standard infantry rifle, its maximum range is 8 hexed (like regular infantry), with the following exceptions from standard rules:
- Whole range distance of 8 hexes is considered a normal range ,
- Sniper does not have a close or long range +1 range modification on hills still apply.

Sniper s firepower is defined upon two rules:
- The number of black attack dices rolled to resolve sniper s attack is equal to the number of figures in the target squad (with heavy infantry figures counting as 1). Example: if sniper attacks a full regular or elite infantry squad it will roll 4 black dices; attacking weakened squad with only 1 figure of MG crew it will roll only 1 dice.
- The maximum hits (casualties) inflicted by sniper s attack is 1 (1 figure removed from the target squad), even if the actual number of hits from rolled black and red dices was greater than 1.
Example: american sniper is attacking a full german regular infantry squad hiding in woods.
American player rolls 4 black attack dices and gets 3 successes, german player rolls 2 red dices for cover and gets no successes. Although sniper made 3 hits, it only manages to inflict 1 casualty in german squad - 1 figure is removed from the target squad.
Since sniper's range of attack is always "normal" within all 8 hexes in LOS around him, sniper's efficiency of attack depends on issues other than distance from target. Sniper rolls success attack dice on:
- 5 or 6 when attacking while being concealed (with a concealed squad marker assigned to sniper unit),
- 6 when attacking while being a revealed squad
This rule represents the increased accuracy of snipers shots, when making a prepared, surprise attack.

Being a sniper's attack target has a terrible effect on soldier's morale.
A successful sniper's attack (inflicting a casualty) makes all squads on target hex immediately pinned (with no effect on already pinned or disrupted squads).

After making an attack with a concealed sniper, roll 1 dice to determine if sniper position was discovered. For every officer in target hex, who survived sniper's attack, add 1 to dice result.
Sniper looses his concealed unit marker, if the result is equal or bigger than the distance between sniper and target hex. Above rule makes it impossible to spot the sniper, if he is making an attack from distance of 8 hexes. (Standard rules regarding concealed squads do not apply, i.e. concealed sniper squad does not automatically become revealed after making an attack.)
In addition, when not in LOS of any enemy unit at the beginning of the Status Phase, a revealed sniper can receive a concealed unit marker. Note, that when using the operation card - camouflageits rules do not apply to sniper units.

When in cover providing area, sniper can not be attacked with normal fire except by:
- an Area Attack, or
- a tank using it's Concussive Firepower ability (i.e. when tank attacks a revealed sniper in building)
Suppressive fire against a sniper can be executed by an Area Attack or direct fire of any enemy unit eligible to fire.
When attacked, sniper unit benefits from cover or officer's presence in the same hex on regular basis.
Sniper is destroyed after sustaining at least 1 hit from normal attack. Suppressive fire attacks against sniper are resolved on regular basis. Note, that a pinned sniper squad can not make a concentrated attack even with an officer present in the same hex.

You can always assault a hex containing a sniper (concealed or revealed, in cover providing or open terrain).
When assaulted, sniper's firepower is always 1.
Cover is determined on regular basis.

Sniper can not be activated with a fire-and movement or assault action.