July 11, 1943: Elements of the American 505th Parachute Infantry Regiment of the 82nd Airborne Division are holding a perimeter for the beachhead on Sicily near Gela created by parts of the U.S. Army's 16th Regiment (1st Infantry Division) and 180th Regiment (45th Infantry Division). Reinforcements will come from the independent 753rd Tank Battalion and from the 41st Armored Infantry and 67th Armored Regiments of the 2nd Armored Division. Two strong but inexperienced panzer groups of the Hermann Goering Panzer Division counterattack to try to destroy the landing force.
American strategy decks represent U.S. Navy gunfire support and the Determination and effectiveness of small unit leaders. The German Disruption deck represents the effects of German artillery fire and the Luftwaffe's attacks on Allied shipping which interfered with the landing of reinforcements and supplies. 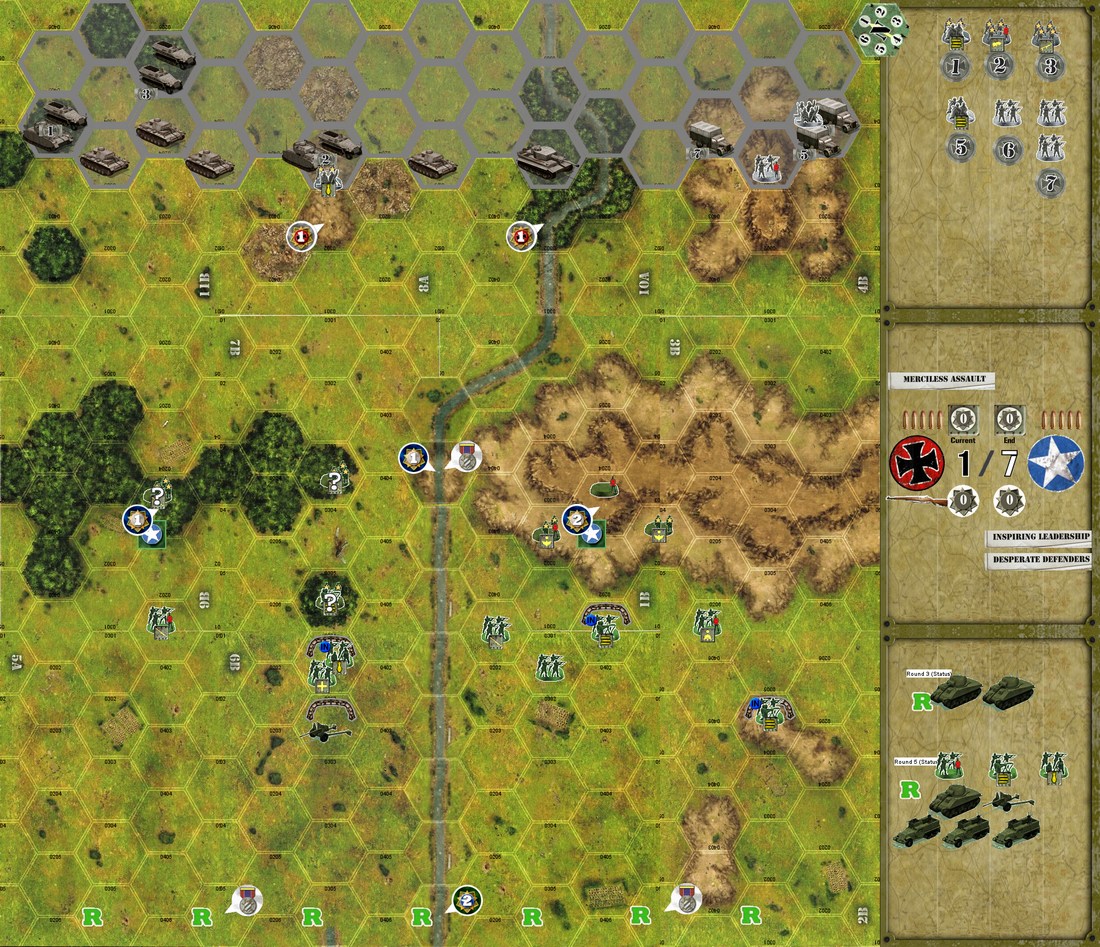 I have a couple of different approaches to wargame design.
One is systems based. With that approach, I design a system for each major aspect of an action that I am modeling, and when I put them all together they hopefully add up to a realistic simulation. The other approach is effects based. This approach concentrates on the outcome of operations and how they impact on different things.
An example of the former approach is in the orders of battle for Gela Beachhead Sicily (this scenario). Each side gets a force which represents the historical proportions, more or less, of the forces engaged. This is not just in terms of units but also of leadership. The Americans receive more officers because it was U.S. commanders at various echelons, and sometimes even individual enlisted men, who organized the troops on the Gela beachhead and got things happening. On the other hand, the Germans get fewer officers in their order of battle because at this stage of the war the supposedly elite Hermann Goering Panzer Division was not a particularly effective unit, with many of its officers being former Luftwaffe (Air Force) personnel suddenly thrust into a ground army role.
An example of effects—based operations is the Strategy and Operations cards, which represent, among other things, the less quantifiable morale factors which had an impact on the battle. The Germans were making an all—out attack to throw back the Allied invasion of Sicily. The Americans had to hold on, as there was nowhere to retreat. Despite the apparent U.S. inferiority in combat power at the start of the scenario, the Americans have other resources that can give them an edge, such as Alpha and Bravo teams. Even the American artillery fits into this, since the cards show the impact of what was historically naval gunfire. The scenario pits two different types of forces against each other, each with its own advantages.

Even before they cleared Axis forces from North Africa in the spring of 1943, the Allied high command looked for their next strategic objective on the road to liberating Europe from the control of Nazi Germany. A rancorous dispute ensued among the Allied planners. The Americans wanted to invade France in 1943, but the British argued that the Allied forces were not yet ready for such a direct confrontation with Germany's battle—hardened army. In the end, Prime Minister Winston Churchill's military staff won the debate, and the next major offensive against Nazi-occupied Europe would be against the supposedly more vulnerable "soft underbelly" (in Churchill's words).
Sicily therefore was chosen as the next step toward the "second front" promised by the Western allies to support the Soviet Union's struggle against Germany. Sicily seemed to be an easy enough goal: the island was within range of the vastly superior Allied airpower based in North Africa, control of Sicily would help solidify Allied control of the Mediterranean, and there was the chance of knocking Germany's vacillating Axis partner Italy out of the war.
Two Allied armies were to make the landing: British Field Marshal Bernard Montgomery's veteran 8th Army on the right flank and General George Patton's new U.S. 7th Army on the left.
At first, there were only two major German formations on the island: the Sicilian Division (re-designated 15th Panzergrenadier) and the Hermann Goering Panzer Division.
They were reinforced after the Allied invasion by the German 1st Fallschirmjager (Paratroop) and 29th Panzergrenadier divisions. There were also a number of Italian divisions available, although only one, the 4th (Livorno), was a mobile unit and also the only Italian division with well-trained, reliable soldiers.
Axis strategy was initially to deploy their mobile units in central locations and then react when the invasion occurred.
Vigorous counterattacks were essential before the Allies could consolidate their beachheads if the Axis had any hope of throwing the invaders back into the sea. This strategy could have worked, as the Allies were still learning how to conduct amphibious landings against determined resistance, and the first wave of the landing forces was lightly armed, often not taking their heavy weapons with them. Also, Allied air cover was poorly coordinated, with much of it away bombing strategic targets far inland instead of directly supporting the landings, allowing the fewer Luftwaffe aircraft the opportunity to attack Allied landing craft and supply ships. The Americans dropped their 82nd Airborne Division by parachute, but most of its units were scattered inland far from the beaches. The situation could have been disastrous for the Americans.
Still, several things mitigated the inevitable Axis counterattack. One was that most of the Italian units were poorly equipped and even more poorly motivated. The Hermann Goering Panzer Division, which was launched against the U.S. 1st Infantry Division at the Gela beachhead, was not in much better shape. The division was created by Hermann Goering, head of the Luftwaffe, as a largely political move to bolster his position in the political struggle for dominance in the Third Reich hierarchy. Many of the division's officers were former aircrew with little experience in panzer operations. The division commander committed the unit in two battle groups, one of which was too heavy in tanks, the other of which was too heavy in infantry.
On the other side of the wire, U.S. forces proved themselves in action. Despite the shortfalls of the landing force, small unit commanders consolidated beachheads and held on until reinforced. Colonel James Gavin, commanding the 505th Parachute Infantry Regiment, proved especially good at Rallying his men and setting up an effective defense.
Meanwhile, elements of the American 1st and 45th Infantry Divisions also held on despite fierce German counterattacks.
Patton fed in reinforcements, even making some local counterattacks. Probably the most critical factor was that U.S. Navy warships provided effective gunfire support that caused considerable Axis casualties and, perhaps more critically, confusion among the Germans.
Despite the German superiority in armored fighting vehicles, I the Americans threw back the Hermann Goering Panzer Division, and Patton's 7th Army moved inland. In the weeks that followed, the Germans under the command of Hans Hube fought a very effective delaying action and managed to escape to Italy despite Allied control of the air and sea.
However, the Axis failure to crush the Allied beachheads at the start of the campaign meant that the outcome was preordained. Just two weeks after the Allied landings on Sicily, Italy's dictator Benito Mussolini was deposed, his country no longer allied with Germany, and a new front opened up in the European Theater of Operations — all due to the Determination of a few thousand men who faced and stopped the Axis tide in front of them with the unforgiving Mediterranean tide behind them.

Fuehrer, we are on the march! Victorious Italian troops crossed the Greco-Albanian frontier at dawn today! (October 28th, 1940)