On December 6. 1944 a Combat Group of the 4th Armoured Division under Colonel Abrams advanced on the Town of Bining, an important rail and road center near the Sigfried Line in the Lorraine area. The only viable way into Bining was a road that was overlooked by the small town Singling, located on high ground to the north. A Combat Group advancing from the South was task to support the advance, but due to problems with difficult terrain and communications was late and Abrams had no support against heavy fire coming from Singling. He decided to send a task force to clear the town and secure the advance on Bining by himself.
A Task force of 14 Tanks and 57 Infantrymen was quickly formed and send to take Singling, without time to make detailed plans.
Singling had been part of the Maginot Line and was a small town only on the outside. Some houses had 3 meter thick concrete walls and the roads leading into town were guarded by Pillboxes to the west, and on the Hills to the east. As the Task Forces Tanks reached the outskirts, they were ambushed by enemy Tanks of the 11. Panzer Division and had to stop their advance.
Infantry was send into town and met some resistance from enemy infantry and Tanks from the west, overlooking the Main road up to the Town square. Heavy German Artillery soon struck the town, and more Tanks were seen on a ridge to the North. The Americans met equal resistance and the Attack turned into a stalemate. Although many of the German soldiers surrendered to the Americans, they were not able to push the well prepared defenders out of town. Soon more Enemy Tanks advanced from the East. One was knocked out by one of the Task Forces Shermans, and the Bazooka team managed to damage and scare off a Tank to the west. But the Odds were starting to turn against the Americans, and they barely held their position until elements of the 10th Armored Infantry Battalion finally arrived to relieve them. But resistance got stronger, and therelief turned into a withdrawal out of town, and a heavy Bombardment by the corps Artillery was put on Singling to settle the matter. The battle at Singling was neither a big action nor a startlingly successful one. All 4th Armored Division units directly involved suffered a total of 22 casualties, of which 6 were killed; they lost 5 medium tanks. Known enemy losses were 2 tanks and 56 prisoners. 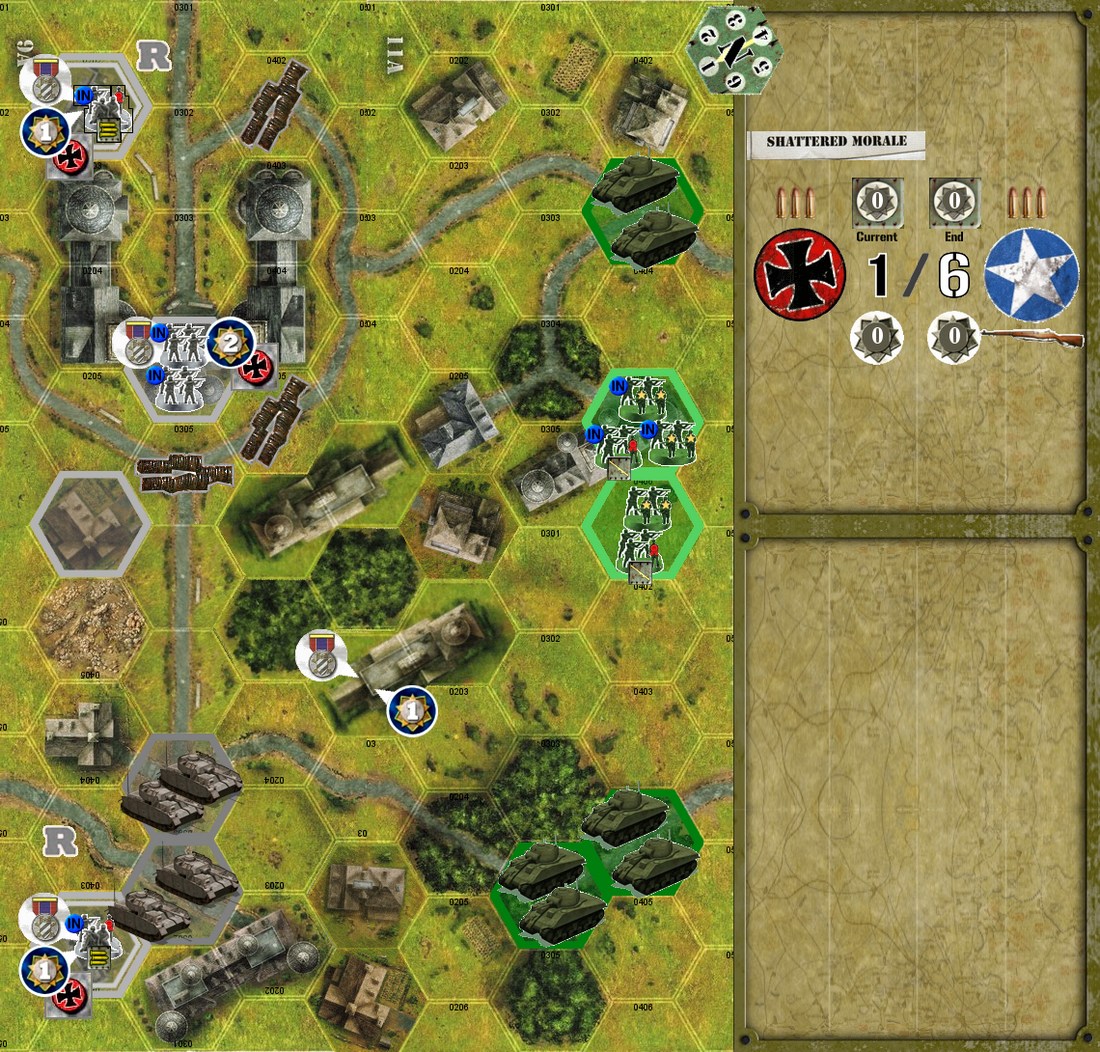 Design Notes
First of all, the game had to be short, so I figured using only four Boards and 6 Rounds would be a good idea. Singling was a small unit action, so I could reduce the Number of Units as well. Some Abstractions had to be made to retain Historicity with the limited resources of the Tide of Iron Main-Game (It is very difficult to represent a town on a high slope without a lot of special rules, and I would also have liked to have Panthers, SP's and AT-Guns in there ; ) ). The geography of the town had to be changed a bit, but I tried to keep the approaches and Fire-lanes according to the historical ones. The two Tank- Groups are isolated by buildings, so the only way to mass all the armour on one of the objectives is the dangerous Main-Road, which is covered by the panzer's.
The reinforced German position in the east has a good field of fire on anything coming up the road from the south, and up to the Town Square in the west. The Western Strong Point guards the eastern approach and is kind of a substitute for Welschofs Farm, which was actually farther to the north. The German player has four Command Points from the start of the scenario, which will give him the Initiative almost every turn. This represents, that the Americans had no time to plan their actions and did not know the enemies strength prior to the attack.
The Germans had strong artillery support, which is modelled by giving them the Artillery 1 Deck. The Americans had a Field Observer in town as well, but he was reluctant to use artillery because he feared friendly fire in the confined space of the town.
The Operation-Card Shattered Moral was given to the German player to make up for all the surrendering soldiers on the German side.
Singling was part of the Maginot Line and had
been prepared by the German forces. To show this
a special rule is added, giving one extra Defense-
Die to Infantry in Buildings with victory
objektives.
The German reinforcements are troops that were stationed in a pillbox in the valley to the north. In the historical action they surrendered after a short firefight. Tanks were seen on a ridge in the north all day, and one of them attacked from the east and was destroyed by American tanks, this is the other reinforcement.
I limited the Action to the initial assault, ending it shortly before the American reinforcements of the 10th arrive. Thus the Victory-Conditions for the Americans are to have at least a foothold in the town by taking at least three of the strategic positions in the in the town. The German player has to prevent this, and keep control of the town to hinder the advance on Bining and Rohrbach.
Main-Source: http://www.history.army.mil/books/wwii/smallunit/smallunitsingling.htm

alecrespi replied the topic: #779 11 months 3 weeks ago
That's right Pino, beautiful and tense game until the last round!
It is incredible how all this has been assembled and blended in a scenario of only 4 maps and a duration of only 6 turns.
The combination of available units, initial deployment hexes, strategy decks and distribution of objective and command points are also excellent.

A solid 4 out of 5 as a rating!
Bravo Aljoscha!

Attached as always you will find the VLOG file to review the game.

pino replied the topic: #778 11 months 4 weeks ago
Played with my friend Ale yesterday. It's a small scenario with a lot of action to gain the control of the 4 Victory Objective. In six rounds we have put all the effort to control the Victory Objective, fighting as hard as we can with Artillery, Infantry and Tanks. Till now no other scenario's gave me the taste and the satisfaction of a great and very well balanced encounter. Very good, two thumbs up e a 4 rating stars for this great scenario.
Read More...
Original Layout PDF (search for CODENAME).

A victory at Kursk would shine like a beacon to the world! (to his generals)

Mediterranean Front
084 Blood on the Mountain