HISTORY DETAILS
In late December, Sue Harukata arrived with the Ouchi relief force. Motonari decided to strike again and ordered Harukata to guard his rear with the Ouchi, while he moved to attack the Amako allied camp at Miyazaki Nagao. But Harukata had no intention of waiting to do battle and seeing that Akihisa’s main camp was inadequately defended, also attacked. Amako Hisayuki's bold charge to check the Ouchi did not slow their advance and the Akihisa’s camp was overrun. Losing both camps in the days fighting, Akihisa took council and after months of fighting choose to lift the siege. 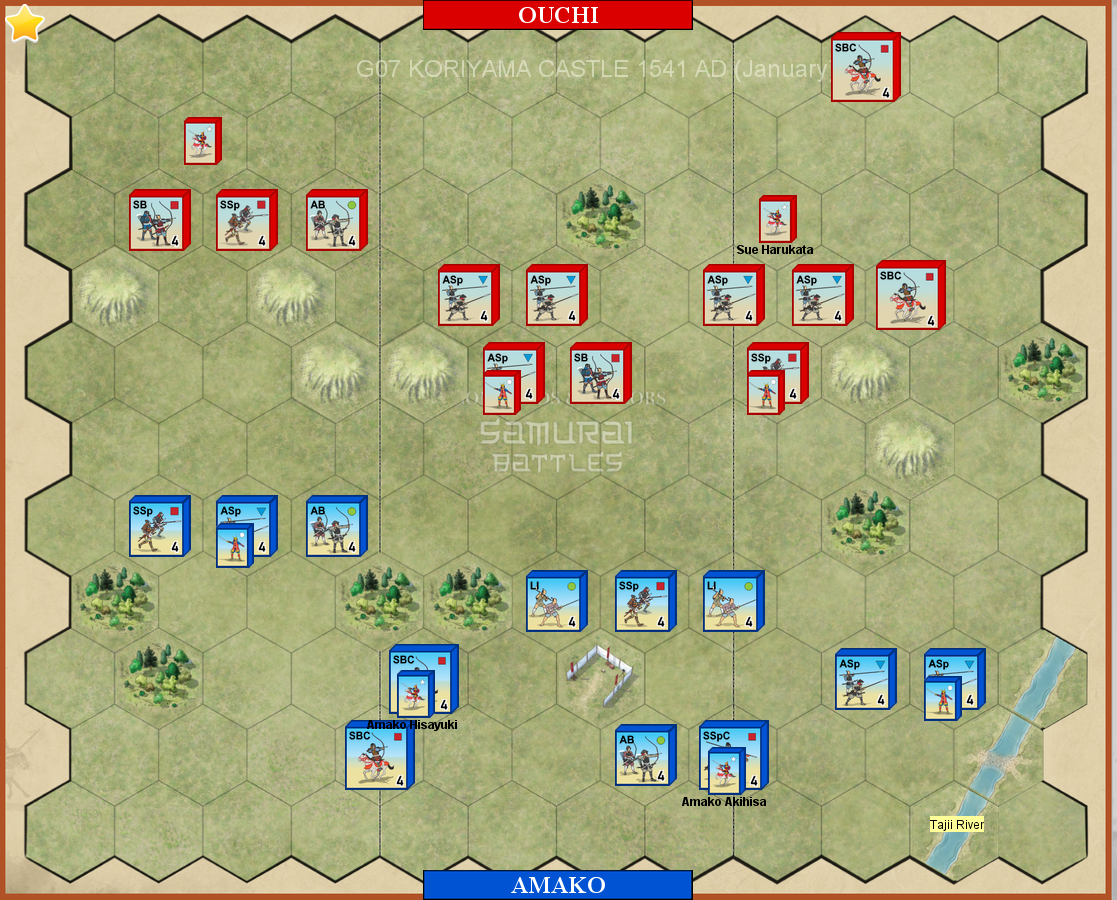 Victory
6 Banners
• 1 Victory Banner for each unit or leader eliminated.
• The Amako Command Tent, although not occupied by a command unit is still worth 3 Victory Banners to the Ouchi player when occupied at the start of his turn and removed. When the Command Tent is removed, the Amako player must discard one of his Command cards at once, selected at random.

Special Rules
• The River Tajii is impassable except at the river ford.

RiverWanderer replied the topic: #841 7 months 1 week ago
I enjoyed a close game of this scenario as Blue. My opponent advanced to form a strong attack on the centre. I scraped a win 5:6, which could have gone the other way had a die roll been different in any of 2 or 3 places. 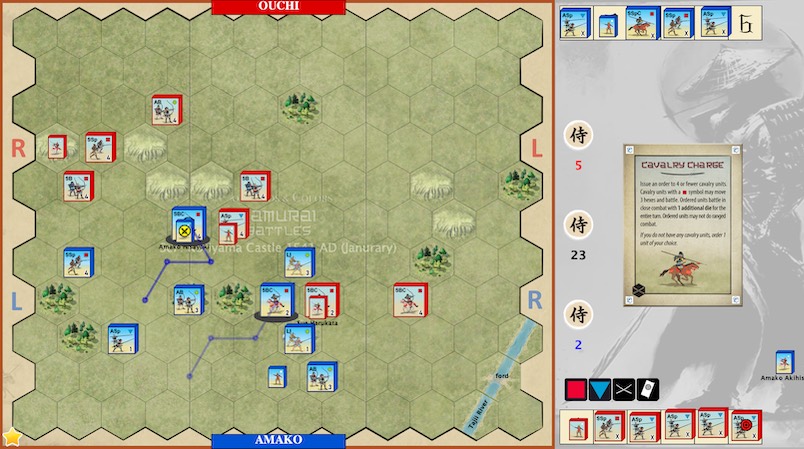 NightOwl3 replied the topic: #797 9 months 1 week ago
Going into the scenario it seemed that Red would win. I decided to go straight for the tent and crush the weak green units. I also wanted to swing my bow CAV and hit the isolated medium troops on my left near the river. I got a good start, but then Judd went into a great defensive position by pulling back and getting his troops together. We had some back and forth, but I finally made contact on his right and weakened several units. I also got two flags by taking out a medium troop and a leader. Judd also pushed up a samurai cav on his left/center threatening to break my line. I hit his right and got two more banners, but did not deliver the knock out. He responded well, and with is spear Cav took out three of my units all samurai. I pulled back my remaining troops on his right to avoid a CAV charge. It took two attempts but I finally took out that bow CAV and got a good roll to get its leader as well. We ended up 6-3, but it was closer than the score shows. I may have pushed a bit too much given his defense. I tend to forget that those samurai bowmen roll 3 dice.
Read More...