In the summer of 1944, facing pressure from political groups at home and manpower needs on the European front abroad, the U.S. Army rescinded its long-standing policy since the end of World War I prohibiting African-Americans from serving as combat troops. The old 92nd Infantry Division, which had been deactivated after the end of World War I, was reactivated for service in the Italian campaign and placed under the command of Major General Edward M. Almond.
The 92nd had served with distinction in World War I, taking for itself the name "Buffalo Soldiers" from the nickname given to African American soldiers in the 1880s by American Indians. The buffalo being an animal of great respect and reverence in Indian culture, it is believed the Indians named them Buffalo Soldiers because of their thick curly hair, dark complexion, and fierce battle prowess. When originally formed as an all-black combat division during the Great War, the division took for itself the buffalo as its divisional symbol and were later known as the "Buffalo Infantry Division."
The first regiment of the 92nd Division to see combat duty in World War II under the new Army policy was the 370th Combat Infantry Regiment commanded by a white staff officer, Col. Raymond G. Sherman. The regiment landed in Naples on August 1, 1944, met by, and cheered by, contingents of other African American servicemen who had been sent to non-combat battalions. The 370th entered combat twentythree days later on August 24, 1944. As part of its first campaign, it participated in the crossing of the Arno River, the conquest of the city of Lucca, and the breach of the Gothic Line. While enemy resistance during the first weeks of combat were reported as "negligible," it became a significant highlight of the war in that the fight against the Nazis finally included African-American combat troops which had, up until that point, been given non-combat duties.
The 370th demonstrated that African-American soldiers, just like their white counterparts, were able to engage, and defeat, the Nazi enemy. In fact, shortly after the Lucca operation, the rest of the 92nd Division arrived in Italy to participate in the fighting around the Ligurian Coast and Massa. The 92nd would continue fighting in Italy until Germany's surrender in 1945. During its short activation period, the 92nd suffered 3,200 casualties and earned 1,891 Purple Hearts, 1,166 Bronze Star Medals, 208 Silver Stars, 1 Distinguished Service Medal, 2 Distinguished Service Crosses, and 2 Medals of Honor.
My introductory scenario "Crossroads at Lucca"covers the tiny engagement that took place in and around the Italian city of Lucca. Historically, the Allies needed to capture the crossroads there, which linked central Italy to Pisa and the Italian coast and provided a clear path to the German defense lines--the Gothic Line. Capture of this important intersection fell to the 370th Combat Infantry regiment of the 92nd. The position was lightly defended by German machine gun battalions, who were fighting a delaying action to allow Field Marshall Kesselring's remaining forces to escape to the Gothic Line -- an immense and intricate system of trenches and defensive works. The "Crossroads at Lucca" scenario is a reminder to players of Tide of Iron that World War II was not a collection of "D-Days," but a series of battles for country towns, like Lucca.

To win this scenario, players will have to follow the Buffalo Infantry Division's motto: "Deeds, not words."

On September 3, 1944, the 92nd's 370th Combat Regiment, known as the "Buffalo Soldiers," assaulted the Italian city of Lucca to capture the crossroads. 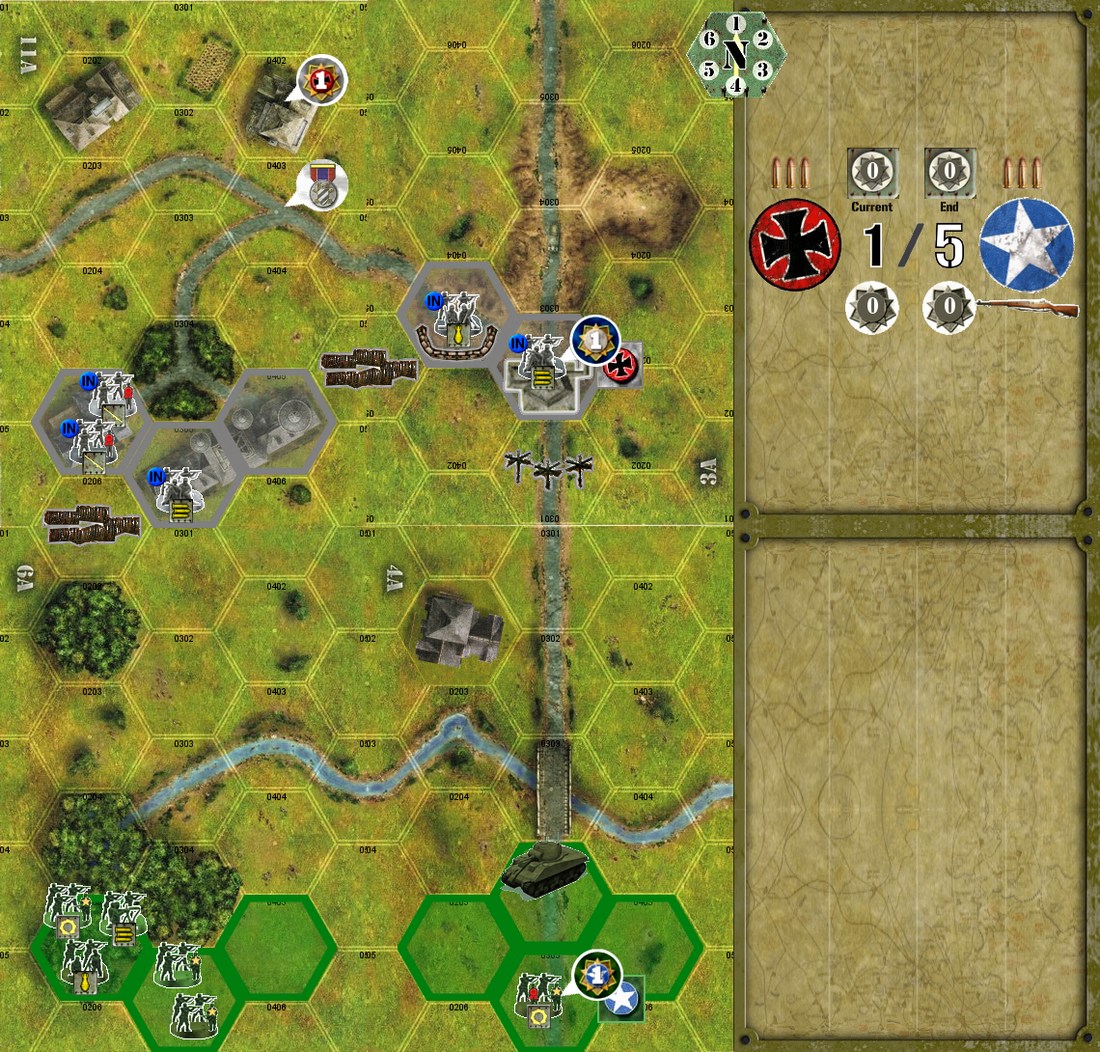 Western Front
028 Battle in the Bocage