HISTORY DETAILS
Takeda Motoshige, learning of the fate of Motonao, marched to the Matauchi River and found Motonari and his allies on the opposite bank. Although outnumbered, Motonari decided to attack and sent half his men across the river while a small force moved to outank the Takeda position. The Takeda army quickly pushed the soldiers of Mori back to the river.
Motoshige, seeing the Mori army retreating, wishing to make his victory complete, rode forward to the river, but was struck by an arrow and killed. The Takeda army broke, leaving Motonari the victor and paving the way for the rise of the Mori clan. 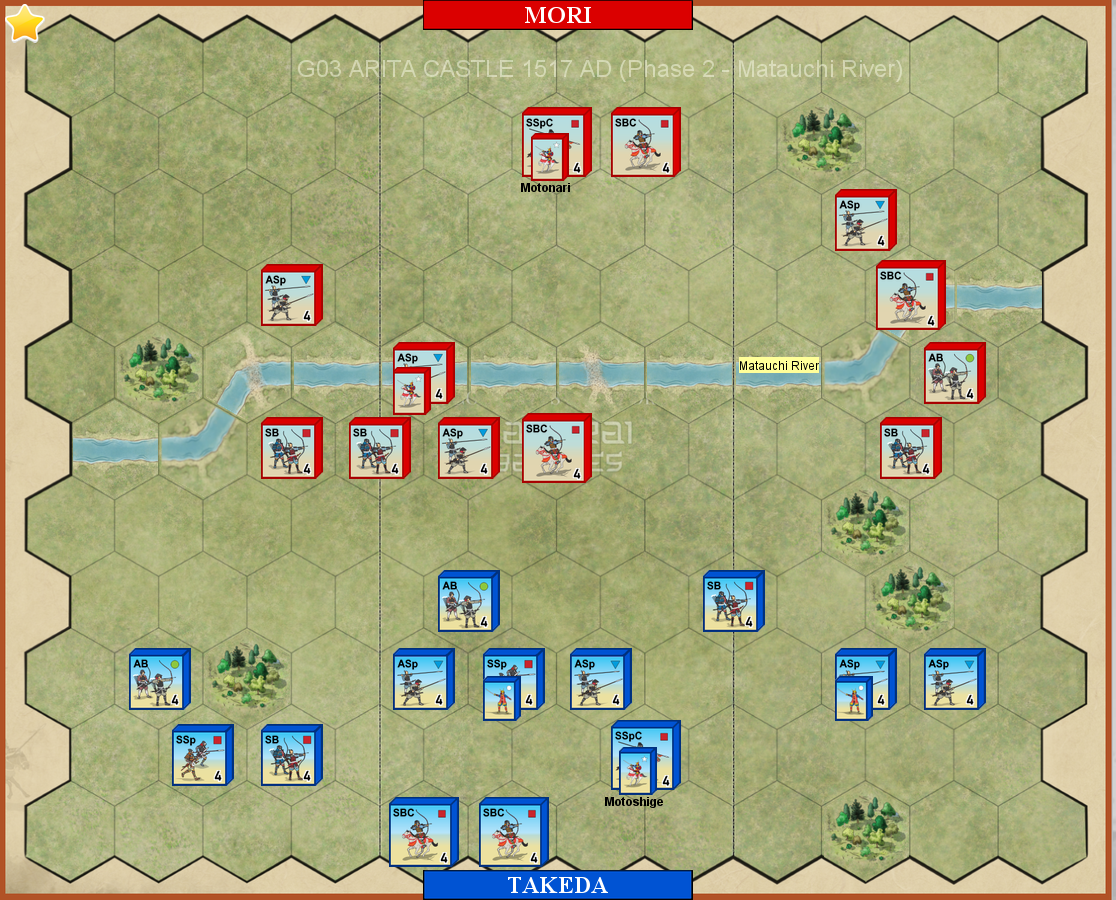 Special Rules
* The Matauchi River is fordable. At the shallow fords there are no battle or movement restrictions.

Pevans replied the topic: #815 8 months 2 weeks ago
Nephew Tom, playing Takeda, seemed to have all the left section cards to start with. He moved up archers and was shredding the Mori troops that were across the river. So I moved in to attack at close quarters, hoping to eliminate the cavalry unit that couldn't retreat. Probably not a good move as my units were mostly archers too. In the fighting that followed, I lost three (out of five) units, while removing only one of Tom's six (there were only four when I started the attack). However, I also killed the (unnamed) infantry leader with them to make the score 2:3. My out-flanking force on the left hadn't moved, but had been engaged by Takeda soldiers.

By now I had left section cards and nothing to rescue my two remaining units across the river, so I tried to make something with that flanking group on my left. I eliminated one Takeda unit, while Tom removed my two stranded units. (3:5) My remaining units in the centre moved out of bowshot, hoping to tempt the Takeda forces up to the river so that I could play my "Blue Dragon" Dragon card (1 die against each unit on or adjacent to water).

Instead Motoshige and his mounted samurai spearmen hit my left, pushing them back across the river. Except for my samurai archers, who hid in the woods. But not for long as a mixture of archers and ashigaru spearmen finished them off. 3:6 and another win for Tom.

Switching sides for the re-match, Tom was careful not to charge in. I tried to emulate his approach, attacking the Mori advance force with archery. I was not as effective as Tom had been. Again, he had left section cards and advanced the outflanking group to start an archery duel with the Takeda bowmen centre-right. He won this exchange, with my archers eliminated, his reduced to one block and retreated back to the river. (0:1)

With a lead in victory banners, Tom then played his masterstroke. With plenty of Honor and Fortune chips built up, he successfully played the "Turncoat" Dragon card. For the third time in five battles. The samurai foot spearmen on my left flank switched sides and attacked the archers alongside them. D'oh!

The renegade samurai started towards the Mori side of the battle, taking out the ashigaru archers in the way. (0:2) Another ashigaru archer unit fell to the arrows of the opposing Mori. (0:3) Time to attack! As part of my general attack on the advanced Mori forces, I went after the turncoats with mounted samurai (bowmen). My attack did not go well: I removed an ashigaru unit, but some lucky dice by Tom destroyed the samurai lynchpin of the attack, their (unnamed) leader fleeing. (1:4)

Tom counter-attacked with Mori cavalry advancing across the river. I brought Motoshige in to make it two cavalry onto one in the centre while my brave right flank ashigaru charged the one-block samurai archers on the river, taking them out, and my mounted samurai eliminated the renegades. 3:4 looks a much healthier scoreline.

The fight in the centre took one of my ashigaru, while my cavalry could only chase off the Mori horsemen. (3:5) Motoshige went after them, but some ashigaru got in the way. Between them and the arrows of the retreating mounted bowmen, Motoshige fell to give Tom another convincing win: 3:6. And that makes the aggregate score for this scenario 6:12 to Tom. Sigh.