HISTORY DETAILS
After a hard days fighting, the Hojo army during the night repositioned to attack Satomi Yoshihiro's army who had fallen back. Yoshihiro had expected help to arrive from his allies, but none had come during the night. The battle resumed on the second day and soon the Hojo army was able to push the Satomi army back again. Yoshihiro realized it was futile to try to defend Konodai any longer and ordered a withdrawal.
The stage is set, the battle lines are drawn, and you are in command. Can you change history?
Note: The alternative narrative for this battle continues with the Satomi army drinking heavily in celebration during the night, only to be routed with great loss by an early morning surprise Hojo attack coming from all  directions. Who would want to play the Satomi side in such a scenario? 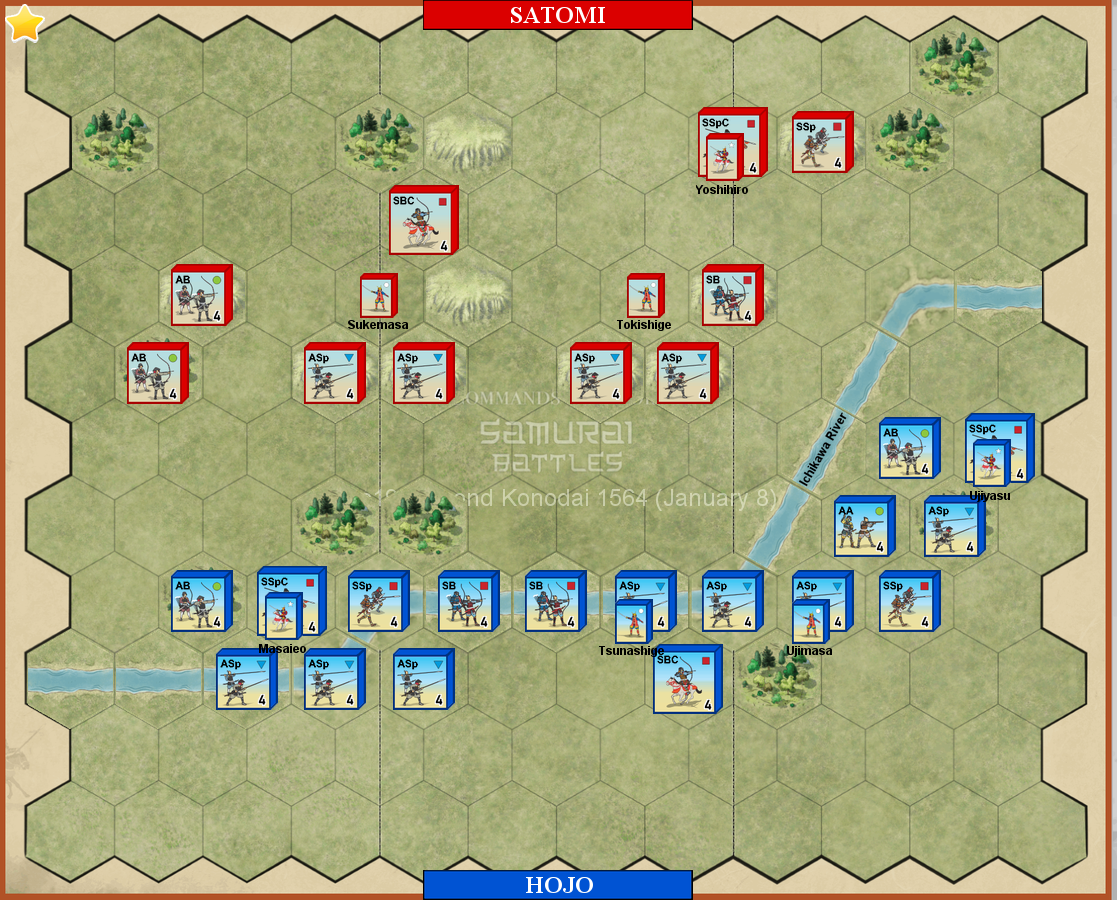 
Judd and I jumped back into Samurai after our Easter break and MOI. We rated sides from last time, G18 not knowing about the mini champaign option. Maybe next time we will try that.

I started out with two cards I wanted to use at the right time: Personal Challenge and Cav Charge. I also had some nice left and right cards that let me move up to my hand which was six. I quickly pushed left, then center, and then right. The right was actually I hold and shoot. I got some good hits early, and knocked out two units that way. I could not get both my cav units in position and held off. With a Cav charge I would be able to hit two of Judd’s generals who were alone. However, Judd moved center with his two Cav units and block my plans. He had some good attacks using his horse leader. I was not able to take out his second Cav unit though. He got to VPs on me and was about to cross the river and flank me. Thankfully, I was way up in Honor and worked my leader next to his. He attacked me and I played the Personal challenge. The dice would be 9-5 in my favor. I joked that usually the person who plays this card dies. However, this time I had many more swords. I think it might have been 5-0 or 5-1. With his leader dead, Judd could not get the extra die on the attack. He did not take out my unit or leader, and I got this last block on the Cav to win the game. I had the advantage all the way, but it was still a great game.

Mark McG replied the topic: #891 11 months 3 weeks ago
Following on from scenario 18, the campaign rule tends to punish Red more, which simply adds to the already difficult situation for them.
Blue won 5-2
Read More...