Are each opponent match a single game, or are we playing switch sides and play two games?

Less More
1 year 1 month ago #776 by Mark McG
Replied by Mark McG on topic SBVT06 New GMT Scenarios
single match..  the competitors for you are in fact the other Red or Blue players..
“I dreamt of worldly success once.”
― Miyamoto Musashi

Before we started we researched and tried to clarify the special rule for this game.

Mori (red) has 5 units which I was never able to order due to never drawing a Order 1 Left. Chosokabe does NOT have any units on the baseline so unless one gets moved there the Order 1 Right card is never needed for that side. We decided to play it as stated however the Mori side seems to be at a disadvantage unless it is supposed to be historically and this is what the scenario is representing. Still doesn't make sense to have the rule for the Chosokabe however....

As mentioned, we played these rules as stated. The Chosokabe advanced toward the Mori right from the beginning while the Mori used it's light units to fire and pick away at the heavy units while approaching slowly. The Samurai Spear Cavalry lead my Yukinaga made a run toward the Mori right side but was chased back and was unfortunately unsuccessful in eliminating the Mori units, which would have drastically changed the outcome.

Would like to hear about how the special rule is handled and/or if the set up for Chosokabe is row up the field too much for all the units?

Less More
1 year 1 month ago #779 by Mark McG
Replied by Mark McG on topic SBVT06 New GMT Scenarios
OK, so here is what I think this special rule means, and for the purposes of the tournament, we use these; 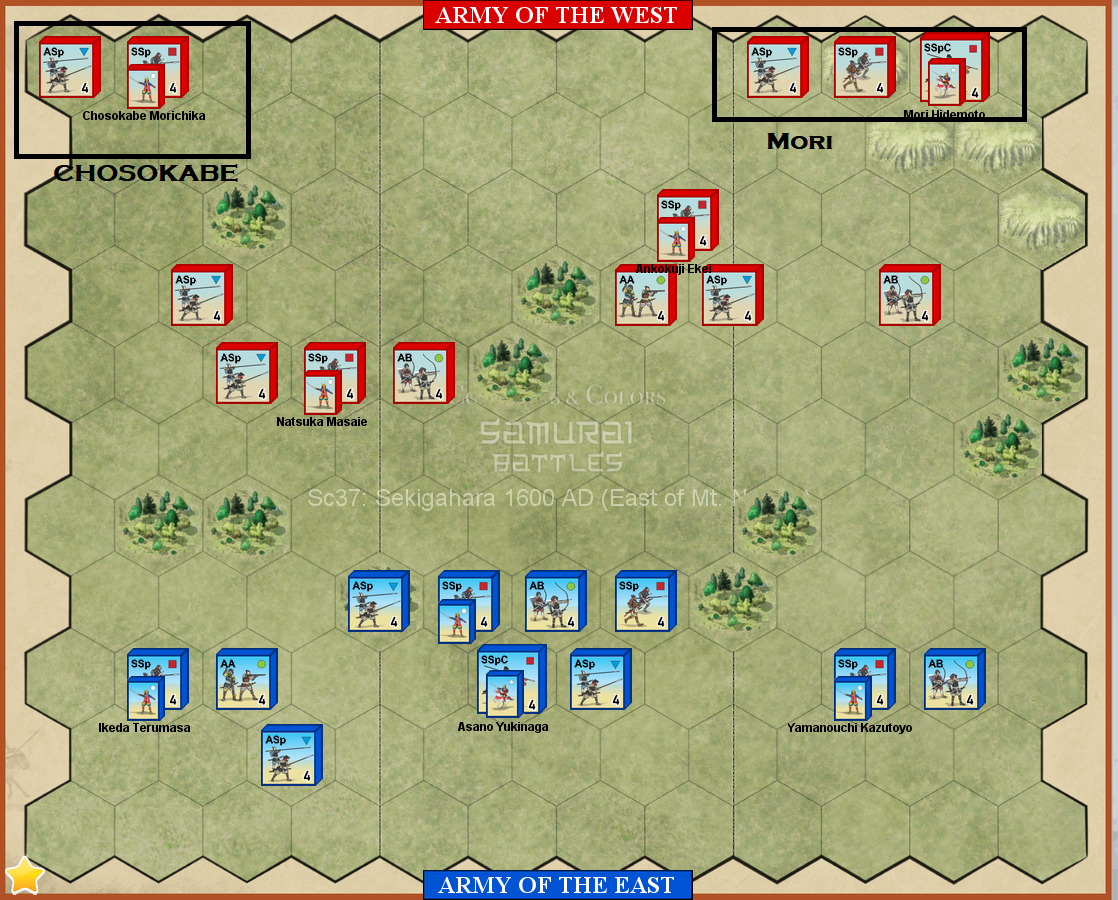 Some BGG questions and my answers
boardgamegeek.com/thread/2671510/scenario-37-special-rules

a) move, but are moved along the baseline, or pushed back onto the baseline? My view is once released, they stay released, but their passivity might be rectivated by a setback
A1: Once released, stays released

b) are attacked on the baseline before being activated? Do they become active? If not, can they battleback?
A2: If attacked may battle back, but are not released

c) the wording of the rule is a bit cryptic, "given an order to move off the baseline" , so can they be given an order to combat, or to move along the baseline?
A3: Can be ordered to battle normally, but not move at all. The no movement restriction is primarily to keep the Command card release instructions sensible.

d) May the Mori and Chosokabe leaders be ordered to detach from their units and move independently to join/support allied units?
A4: Yes, with an Order 1 card.

Less More
1 year 1 month ago #780 by Cavie
Replied by Cavie on topic SBVT06 New GMT Scenarios
This all makes more sense now that I see Red has Mori and Chosokabe. I had it in my head it Mori was one side and Chosokabe the other.

I agree with what you've figured out here Mark and hope to hear Richard Borg confirm. Thanks.

A scenario of controversy, but actually had little effect on this play.
I led off with a selection of colourful animals (White and Red dragon) whilst adjusting my lines.
Both the Mori and Chosokabe leaders got off the baseline with order 1 cards.

A Hold & Shoot did good work whittling down a Foot Samurai under Natsuka Masaie, and the follow up Infantry Onslaught got my killer Samurai into the fight. This foot samurai under an unnamed leader proceded to win the game, killing the Samurai unit, Masaie, the Chosokabe leader on a First Strike, an Ashigaru bowman and an Ashigaru spearman over successive turns. Not only that, he did it without taking a hit. He deserves a name..  must be on of the Asano clan I suspect
EDIT: thinking Asano Nagaakira works

Oddly I had Turncoats sitting in my hand, but never the chance to use it with even remote confidence. Given that Kikkawa Hiroie was a turncoat, it would have been appropriate

A typically bruising and brutal Samurai Battles scenario which was done in just over 30 minutes. The inevitable opening East cavalry strike into the vulnerable  West centre was nicely countered but caused enough damage by eliminating 2 units and a leader. After the initial carnage the two armies settled down into sporadic ranged fire and repositioning of units, until the East Infantry Onslaughted into the lightly defended West's right flank. The West salvaged this situation nicely with a Cavalry Charge and Katchu Keiba victor by Hideie into that flank all the way from the opposite one, destroying the East's samurai foot spear and leader, putting the armies at 4 banners apiece and looking to have snatched a spectacular comeback win. The decisive play was a Timid Success by the East, stopping Hideie from advancing and, crucially, forcing a Loss of Honour roll, which devastated a nearby Ashigaru Arquebus. The East were able to take out this depleted Arquebus unit next play. A very fortunate win in a quick, dramatic game. Well played, Eric, and thanks for an enjoyable game. A very respectable result for the West in this scenario.

Played with the correct starting honor for each side (4 for Red and 7 for Blue IIR).

This was not an elegant battle. And the scene looked pretty dire for Red at the beginning - especially when blue used a flying Geese formation to pepper red's forces with ranged attacks from 3 sides. Initial turns by red were trying to get their units into more defensible positions while also spreading out of of solely being in the center section as Red's had was heavy with orders on the two flanks. Blue eventually led a frontal attack on red's army, but could not inflict major casualties as the red army continued to dishonorably fall back. Eventually, the red army was able to pressure the blue army flanks with samurai cavalry, but could not land any decisive blows. After multiple rounds of skirmish, a Personal challenge by Red caused Saruwatari Nobumitsu (blue leader) to retire from the field of battle. The casualties that blue was inflicting on red in the center, especially after engaging their samurai cavalry in battle, soon added up as red lost 3 units in the middle. Notomi Tenori was so shamed by the collapsing red center forces, that seppuku was the only answer. The red army's cavalry were called in to try to stop the damage in the middle and were able to eliminate Shimazu Iehisa (blue leader) and the resto of blue's samurai cavalry a turn later. The Blue army was stalled at 4 banners and did not seem to be able to get orders to their center units to finish the battle. In addition, many of blue's forces were weak and vulnerable. A call to arms to all Infantry Spearman was all the Red Army needed to bolster their forces, defeat two units, and tie the battle up at 4 banners apiece. At this point, it was anyone's game. Unlucky dice from blue allowed red to survive one final attack and red had the last banner on their subsequent turn.

Honor was scarce, the scenario played long, and a most enjoyable time was had by both sides.

As figured with this battle, the Army of the West held back and used range fire as the Army of the East approached. Arquebus got in quite a few hits which helped their cause. Fences & mountains helped the West as well but weren't a huge factor in the game. Leaders were proving tougher than keeping the banner count down. Final two plays of the game (Shogun & a Counter Attack) did the most damage and ended it.

The key to red success here is being able to pull the Order Ones they need to get their locked units into the battle. On this occasion they were able to pull one of each to get key units released, particularly the Mori cavalry. Dragon cards were decisive in this battle, with A Katchu Keiba victor to quickly get the released Mori into the fray, a successful early Personal Challenge by blue to drop red to 4 Command, two important plays of White Fox Spirit (the second fetched by a Ninja Thief), a Timid Success to prevent a deadly red momentum and bonus close combat, and a Wild Winds on the last play of the game to prevent the red cavalry from taking a possibly spectacular Cavalry Charge victory. Instead Ekei died on a anti-climactic battle back leader check while fighting into the woods on his left flank. Well played, Michal, and a good red result for this battle. As always, Samurai battles is swingy and cruel.

I really like the timing mechanism of the order One cards. In this case it is very luck driven (if red never draw a left Order one they're not likely to be competitive) but it's another way to put an attacker up against a clock. It probably works better with the Nagashino special rule but I think it works very well in principle.