HISTORY DETAILS
The Oda and Imagawa were great rivals, but fighting between these two families was rare, for the two were separated by the domains of the Matsudaira family. In 1542, however, Oda Nobuhide and Imagawa Yashimoto, seeking to extend their influence and reacting to moves by the other, both advanced into Mikawa. The armies met at Azuki-zaka, near the Matsudra capital of Okazzaki. The Imagawa army’s vanguard was led by a brave warrior, Yuhra, but was quickly overpowered by Oda Nobuhide and his three brothers.
The stage is set, the battle lines are drawn, and you are in command. Can you change history? 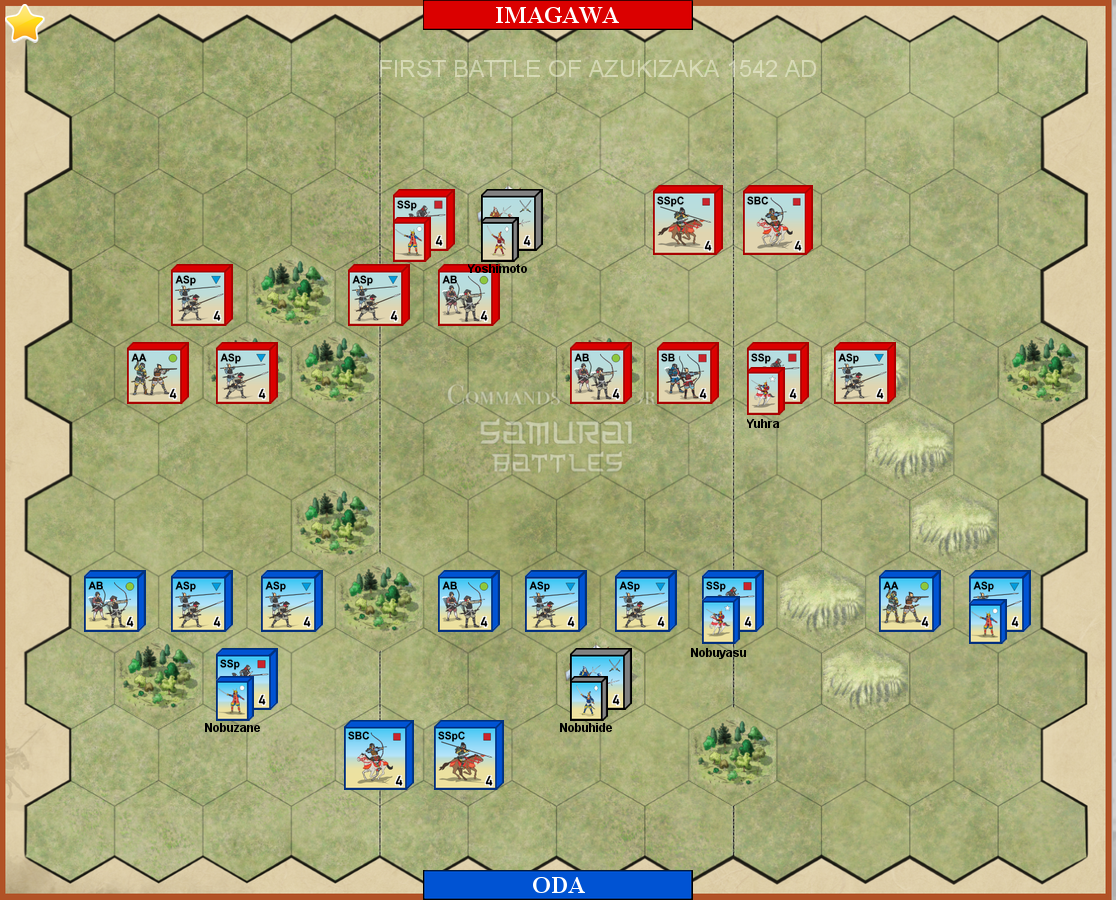 Victory
5 Banners
* 1 Victory Banner for each unit or leader eliminated.
* If your unit occupies the enemy's Command Tent hex at the start of your turn, the camp hex is removed from the battlefield. The capture of the enemy Command Tent is worth 3 permanent Victory Banners. When your command tent is removed, you must discard one of your Command cards at once, selected at random.

One of the most interesting and balanced scenarios in the book.

This game went down to the wire and was a real thrill. Judd started off pushing hard on my troops and did some early damage. I fell back to try and center my troops around the command tent as an anchor. While it looked bad, I was able to get a miracle shot with an Arquebus using a tactical card for a re-roll on sword hits. I got two hits swords and two more on the re-roll. I took out one of Judd’s Car units and split his line. There was hope and we broke for the night. The following week we picked up with more fighting right off the bat. I was up two to one until we had a fast exchange in which we had three leaders killed in a row. We were then 4-3 with Judd up one. On my turn I had the chance to win. I got one VP to tie. It came down to one chance to win. Judd had one unit with just one block left. I missed with my two dice for attacking into a forrest. However, I had the re-roll tactic card. Another miss. Judd came back the next turn to take out a lone medium infantry with three blue triangles. Judd wins 5-4. A fantastic game. Footnote: this was the first scenario with both teams having command tents on the board. Neither one of us tried to attack the other command tent.
Read More...