HISTORY DETAILS
When the head of the Mori Clan died suddenly, Takeda Motoshige saw the opportunity to advance into Mori territory and captured Arita Castle. Provoked into action, Motonari, just a young man of 20 years, mobilized the Mori clan and set of towards Arita Castle. On the way, he and his personal retinue of mounted Samurai encountered the Takeda Vanguard commanded by Kumagai Motonao. The two forces ,instead of closing, stood f irm and engaged in a heated archery exchange. While encouraging his men, Motonao, was struck down and the Takeda vanguard seeing their leader fall retired back to the castle. 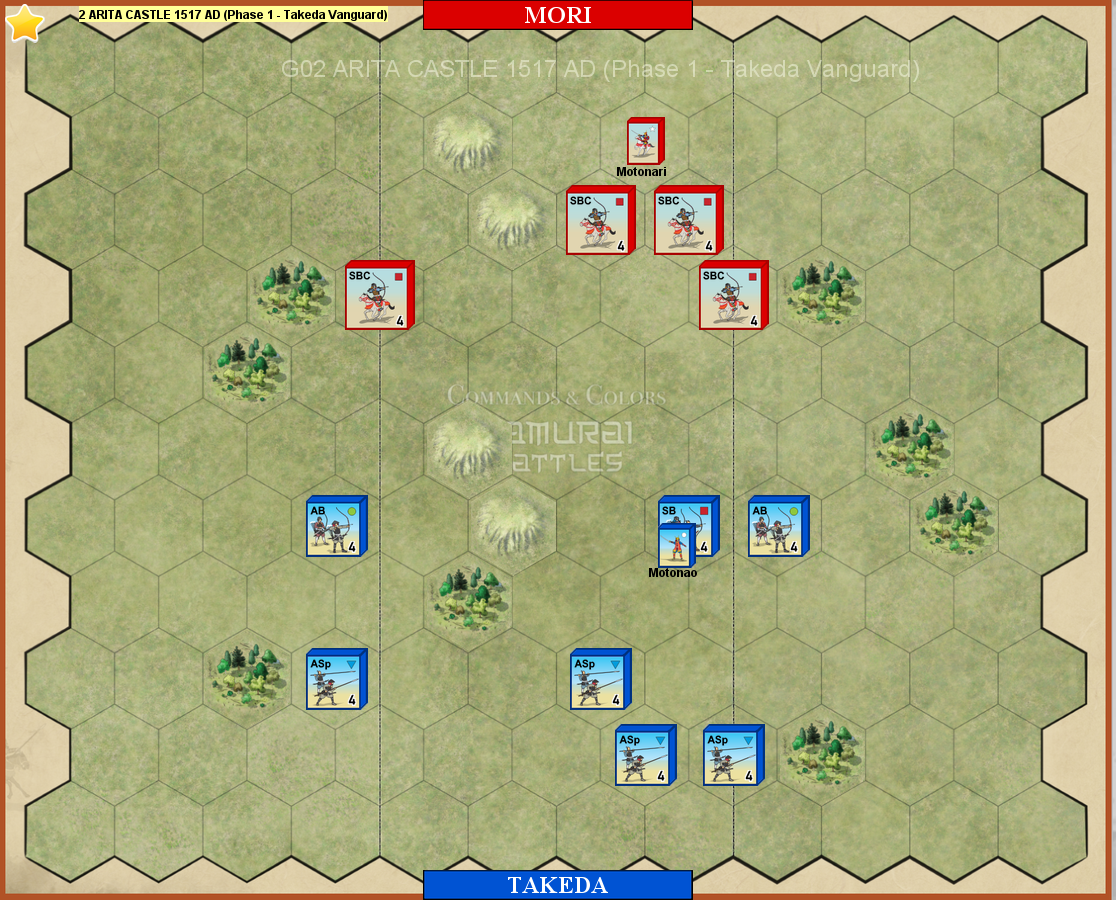 Pevans replied the topic: #814 7 months 1 week ago
This looked like a quick scenario as it's only three banners to win and eliminating a leader counts as two. As I was sitting on the blue side of the board, I took Takeda first. Nephew Tom's Mori immediately attacked my archers in the centre, one cavalry unit charging in, while the others stood back and used their bows. I managed to bring up my spearmen to support the archers, but lost one while battering the Mori cavalry in close combat. (That's 0:1 to Mori)

Tom then played his masterstroke. With plenty of Honor and Fortune chips built up, he successfully played the "Turncoat" Dragon card. My left flank spearmen changed side and attacked the archers they were supposed to be supporting! I was not happy, but managed to extricate the archers.

In the centre, Tom retreated his battered unit and assaulted the ashigaru with another one - with archery support. I battered this unit as well, pursuing it with my spearmen. Tom then flung his third unit in and destroyed the Takeda samurai led by Motonao, killing him into the bargain. That took the score to 0:3 (0:4 if you ignore that a player can't get more than is required to win) and demonstrated the huge advantage of mounted samurai over ashigaru.

Thus I felt hopeful when we swapped sides. Ignoring history (the two sides "engaged in a heated archery exchange"), I sent my three cavalry in the centre into close combat with the Takeda archers - Tom had got two of his spearmen up as support. I demolished the samurai unit in short order, Motonao committing seppuku to avoid being ridden down, and the ashigaru archers shortly after - though not without casualties. (2:0)

Tom then played his masterstroke. With plenty of Honor and Fortune chips built up, he successfully played the "Turncoat" Dragon card. Again. My right flank unit switched sides and attacked its erstwhile comrades from behind. With ashigaru spearmen on one side and their own cavalry on the other, my men fought valiantly. However, I lost one unit (2:1) before getting rid of the turncoats. (3:1)

Now there are 40 Dragon cards and only one of them is the Turncoat. With us using less than half the cards each time, what are the odds of Tom getting it twice? Be that as it may, this left the aggregate score for this scenario at 3:4 to him.