Seno-o no Taro Kaneyasu, a Taira ally captured in the northern campaign, escaped from Minamoto custody while being escorted to his native province of Bitchu. Calling on Taira allies from Bizen, Bitchu and Bingo, Seno-o assembled a small force that encamped at Fukuryuji Nawate in Bizen. There they dug in behind flooded rice paddies, constructing arrow towers, a moat, abatis and shield wall.
Minamoto no Yoshinaka ordered Imai Kanehira to destroy them. Under a fierce volley of arrows, Kanehira’s cavalry ploughed through the rice paddies up to their horses’ withers and filled in the moat with their own dead warriors and mounts. After brutal fighting which lasted the entire day, Seno-o’s defenses were overrun and he fled towards Bitchu, but was slain protecting his son Muneyasu against their pursuers.
The stage is set, the battle lines are drawn, and you are in command. The rest is history. 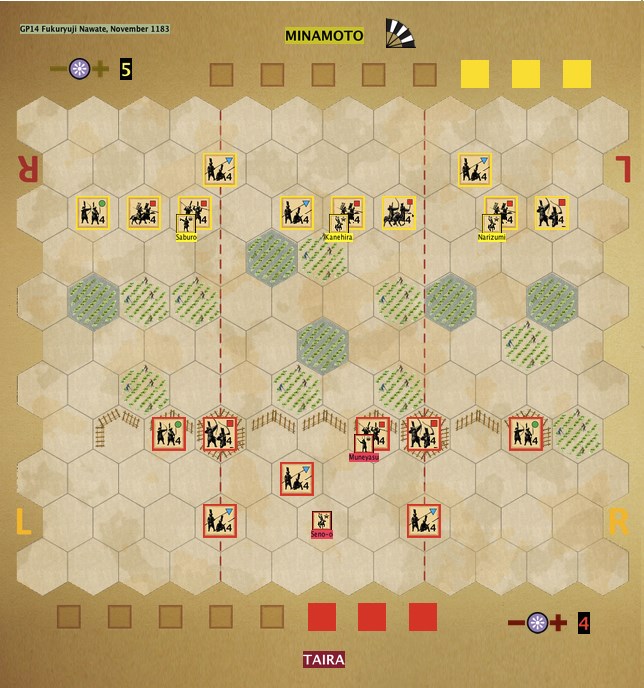 Victory
5 Banners
1 Victory Banner for each Leader or Unit eliminated.
The Minamoto army may not win unless it has a unit on or over the Taira side of the hex line of the Palisade at the same time as it has 5 banners.

Mark McG replied the topic: #618 3 years 5 months ago
Making each Arrow tower worth 1 Victory banner and pushing the Banner count up to 6 would be an interesting variant for this scenario. The Minamoto Victory Special Rule "The Minamoto army may not win unless it has a unit on or over the Taira side of the hex line of the Palisade at the same time as it has 5 banners." could be removed.
Read More...