After their flight from Fukuhara, the Taira consolidated power in the western provinces and established a new capital in exile at Yashima, off the island of Shikoku. Alarmed by this, Minamoto no Yoshinaka sent a force from Kyoto under Yata Yoshikiyo, to assemble a fleet of boats at Mizushima in Bitchu province with the intention of attacking Yashima directly. Forewarned, the Taira sent its own fleet under Taira no Noritsune and Taira no Tomomori, and caught the Minamoto by surprise on the beach.
After a rousing speech to his troops, Noritsune ordered the Taira boats rafted together with grappling hooks and wooden planks, to increase their stability and the morale of his troops. Seeing his lieutenant Yukihiro killed, the enraged Yoshikiyo launched his own boats and after an exchange of arrows, met the Taira in fierce hand to hand fighting, in which his vessel was sunk and he and his retainers were lost. The Taira stormed the beach, mounted the horses they had brought on their boats, and routed the Minamoto.
Mizushima was the first victory of the Taira following their demoralising flight from Kyoto and Fukuhara, and ensured that the war would continue.
The stage is set, the battle lines are drawn, and you are in command. The rest is history. 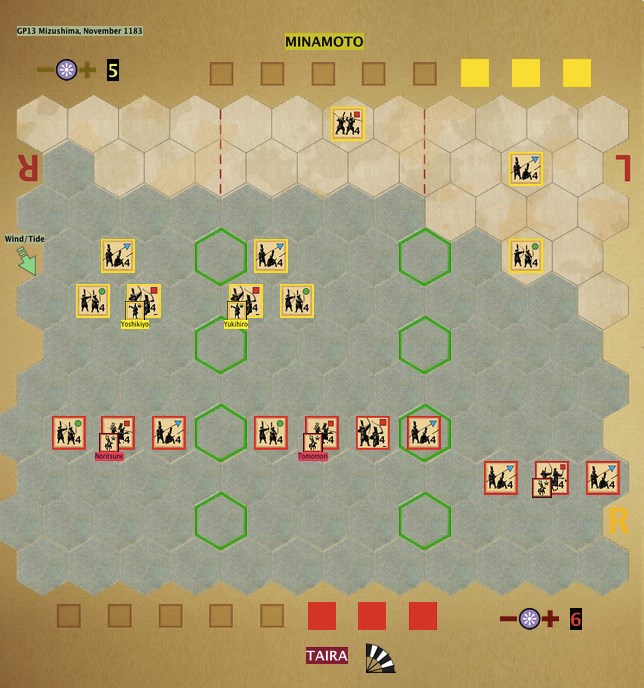 Victory
5 Banners
1 Victory Banner for each Leader or Unit eliminated.
The Taira may not win unless they have 2 units on land hexes at the same time as they have 5 or more Victory banners.