It was 13 April when news of Cumberland’s approach reached Charles. Orders were sent for the clans to rendezvous at Culloden House at the edge of Drummossie Moor. The Moor was rough with heather shrubs, small marshes and generally flat, not typical terrain for a Highland charge. On the night of the 15th, an attempt to surprise the Government troops while still in camp failed and when the men returned to the Moor they were ordered to rest. When Cumberland’s line of battle marched forward on the 16th, Charles army was not nearly ready and far weaker than it should have been. The Jacobite guns opened the battle, but were no match for the Government artillery. The clans were under constant attack by the Government artillery before Charles ordered the clans to charge. In a staggered charge, the Highland line closed. The center clans moved to the right to avoid the boggy ground and there was ferocious hand-to-hand fighting on the Jacobite right. The Highland left had only advanced a short distance when word that the right had been outflanked and the Jacobite right was in retreat. 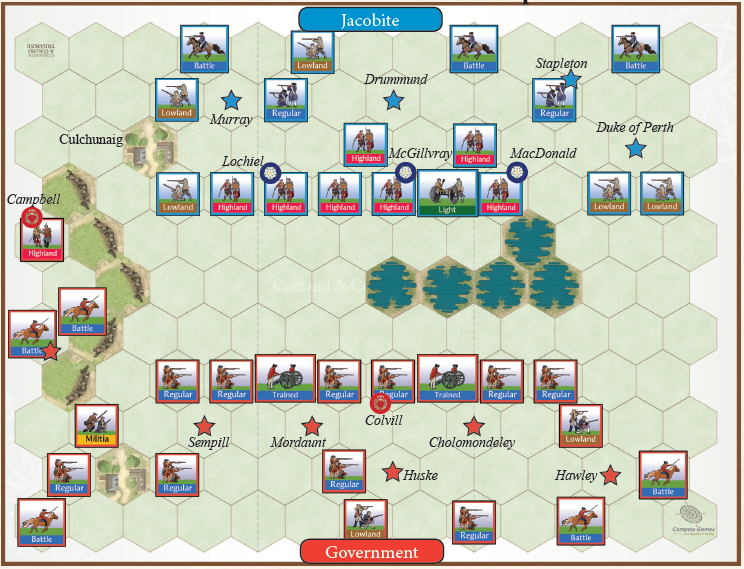 • Opening Cannonade rules are in effect, but the Jacobite player fires his artillery unit first.
• Clearing a section rules are in effect for both players.
A Victory Banner for this objective is permanently gained when there are no enemy units in a section of the battlefield at the start of a player’s turn. In addition, at the start of each of your turns as long as there are no enemy units in the section, you will gain 1 additional permanent Victory Banner. Note - the hexes with a dotted line are considered center hexes.
• Breakthrough objective rules are in effect for both players. Each ordered unit that exits the battlefield from the opposition baseline hex, gains 1 Permanent Victory Banner.