When Charles laid siege to Sterling Castle, it brought the Government army out into the open and the two armies meet at Falkirt Muir. In the early going of the battle the Highlanders on the right held their ground against an all out cavalry charge. The Highlanders then counter attacked and the rest of the Highland line joined in. The charge caused the Government left and center to panic and only
the Government units on the right that were protected by the ravine remained. As the Jacobites paused to reestablish their lines, it allowed other Government units in the second line to move forward and the cavalry to rally. As night was drawing near, a second almost half-hearted charge against the newly formed Government line would result in no gain.
The Jacobites pulled back as night fell and the remaining Government units withdrew. Charles had captured Falkirk, but the weather and long winter night would not allow Murray time to regroup his forces and follow up on his victory. 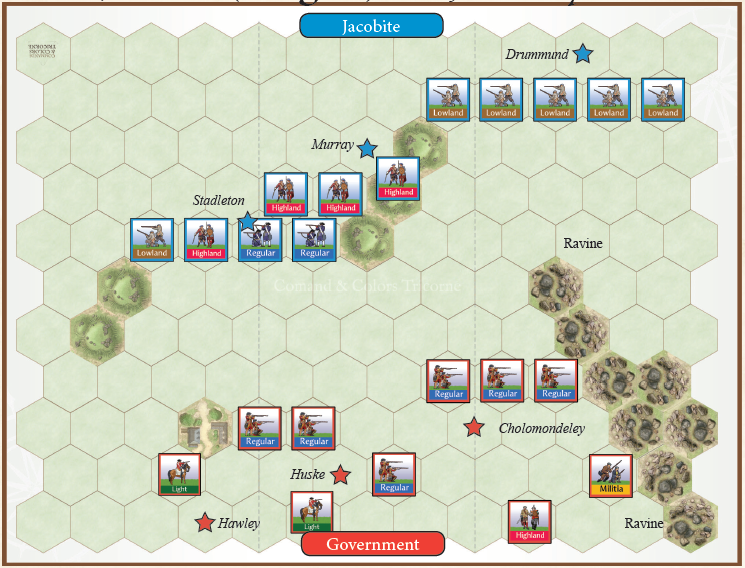 6 Victory Banners - or the Government player wins if the Jacobites do not win by the end of their 10th card play.

* The Jacobite player does not draw a new Command card at the end of his turn.
• Time pressure objective rules are in effect for the Jacobite player. When a Government player plays a “Scout” Command card, the player may draw 1 Command card and take 1 Permanent Victory Banner instead of drawing 2 Command cards.
• If a Government unit is ordered and moves back toward its baseline, the unit must make a rally check after its movement.
• The weather is bad and it is raining. No volley fire bonus during the battle.

this seems very contrary to the 83% pro-Government at the current time!
Read More...