As Prince Charles withdrew from Britain, he paused to place Sterling Castle, the historical “Key” to Scotland, under siege. Hawley, in command of the Government army, left Edinburgh with about 7,000 men to relieve the siege. Charles’ plan of laying siege to bring the Government army out into the open, seemed to work perfectly. Learning that Hawley had made camp at Falkirk, Murray’s army of Jacobites move to take the high ground of Falkirt Muir. Hawley was slow to react and sent his cavalry to take the summit, while the foot units followed and deployed into a line of battle. The Highlanders held their ground against the cavalry charge and then launched a counter attack. Seeing the cavalry run on their right, the rest of the Jacobite front line rose up and joined in the charge. The left of the Government line began to panic and only the units that were protected by the ravine on the Government right, stood firm. As the Jacobites paused to reestablish their lines, the Government cavalry rallied and joined the remaining Government units on the right. 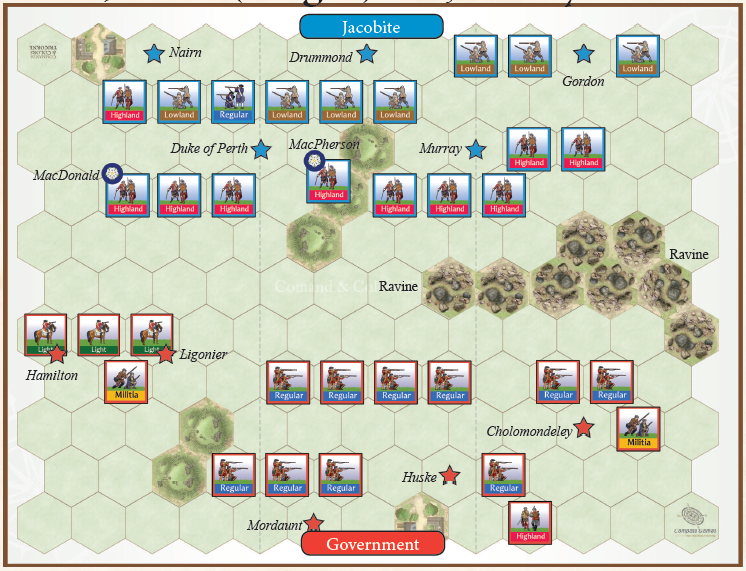 • Clearing a section rules are in effect for both players.
A Victory Banner for this objective is permanently gained when there are no enemy units in a section of the battlefield at the start of a player’s turn. In addition, at the start of each of your turns as long as there are no enemy units in the section, you will gain 1 additional permanent Victory Banner. Note - the hexes with a dotted line are considered center hexes.
• The weather is bad and it is raining. No volley fire bonus during the battle.