Prince Charles, the young pretender, returned to Scotland in July and sent messengers with the lighted cross that called for the clans to rise. John Cope, who was now the Government’s Commander in Chief in Scotland, marched with a small army to deal with the rising. Both armies of about equal size were in position near Prestonpans on the 20 of September. Murray, believing the Jacobites could turn Cope’s flank, made a night march, but Cope’s pickets alerted him and by dawn he had drawn up his army in a single line to face the Jacobites.
When the Jacobites did attack from their new position, not only did the artillery and cavalry panic, but the infantry, astonished at the speed of the Jacobite charge, also collapsed within just a few minutes. With the Government army all but destroyed and on the run, Cope managed to escape to the south, as did many of his cavalry. 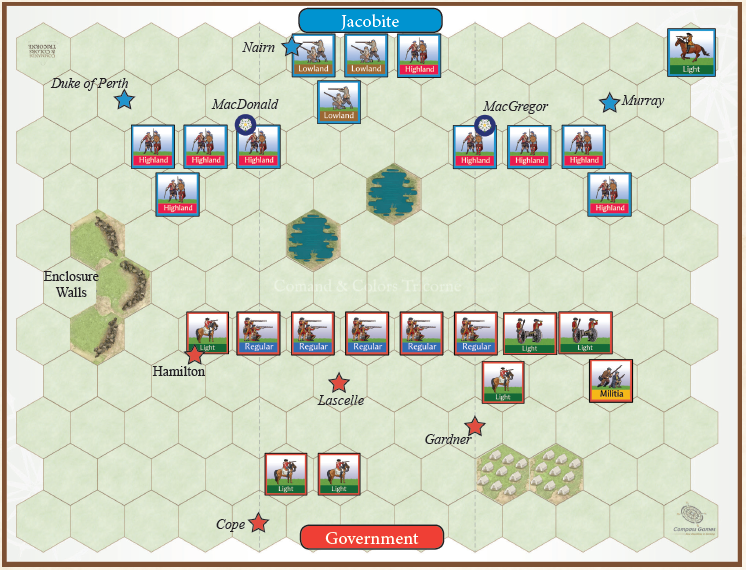 • Opening Cannonade rules are in effect. A Government artillery unit must make a rally check after each combat.
• Breakthrough objective rules are in effect for the Jacobite player. Each Jacobite ordered unit that exits the battlefield from the Government baseline, gains 2 Permanent Victory Banners.
• The Jacobite player gains 1 Permanent Victory banner when a Jacobite unit occupies a camp hex at the start of its turn. Remove the camp hex and gain 1 Victory Banner.
• When a Government unit takes one or more hits, but does not retreat, the unit must still make a rally check.