Posted in Jacobite Rising of 1719

In 1719 Spain and England were embroiled in war. A planned invasion of England by 5,000 Spanish soldiers was foiled when storms broke up the entire fleet and only two ships reached Loch Duich. Not long after landing, the few Spaniards were joined by Highlanders and other clans looking to restore James Stuart, the old Pretender, to the throne. The Government, also aware of the landing, ordered Wightman’s troops to march from Inverness to engage and destroy this new threat. The rebels, now under the command of William Murray, move to Glen Shiel and deployed in the narrow
valley. When Wightman arrived, he ordered the attack on both flanks, while his artillery pinned the Spaniards in their position. Successfully turning both flanks, Wightman then ordered the whole Government force to press forward and the Jacobite center buckled under the pressure and retreated along with the Spanish regulars back toward Loc Druich. 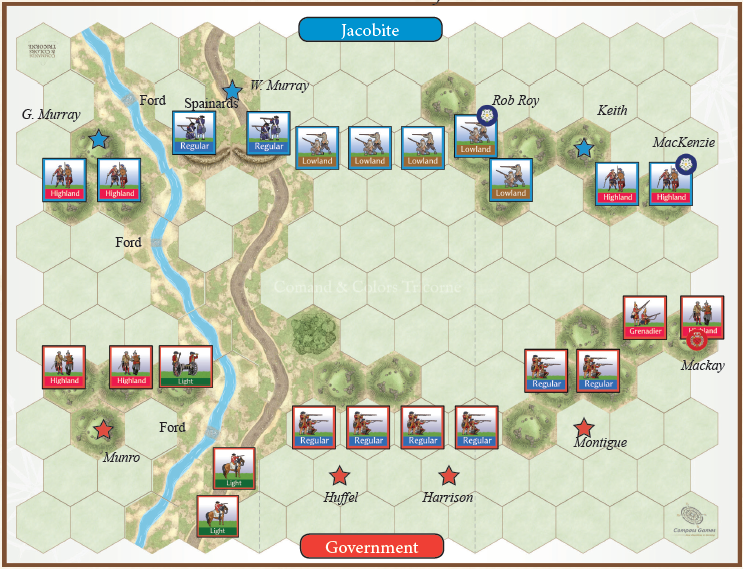 • Opening Cannonade rules are in effect.
• Clearing a section rules are in effect for the Government player. A Victory Banner for this objective is permanently gained when there are no enemy units in a section of the battlefield at the start of a player’s turn. In addition, at the start of each of your turns as long as there are no enemy units in the section, you will gain 1 additional permanent Victory Banner. Note - the hexes with a dotted line are considered center hexes.
• River Shiel is fordable. In addition, there is no movement restrictions at the two shallow fords.