Written by Andrea Tosti. Posted in Alexander the Great (338-323 BC)

Historical Background
The first Alexander’s campaign, after becoming King of the Macedonia, took place in the spring of 335 BC against the Triballians, that lived in the today’s northern Bulgary. Leaving from Amphipolis he drove north toward Edirne and he overcame the resistance of the free Thracian people at Sipka pass. After this first skirmish, Alexander drove toward the Danube but Sirmo, King of Triballians, informed as to where the Macedonians were directed, drew up his troops along river Lyginus (probably today’s Isker), one of the Danube’s tributaries, defending his people that took refuge in the island of Peuce and blocking Alexander’s path. Alexander III soon engaged the Triballians with his phalanx, set in column, the archers and the agrian light troops firing at the enemy and the cavalry on the flanks. The Triballians reacted with their ranged fire too but, as soon as their missiles exhausted, they were overwhelmed by the double envelope maneuver of the young but already brilliant Alexander.
The stage is set. The battle lines are drawn and you are in command. The rest is history. 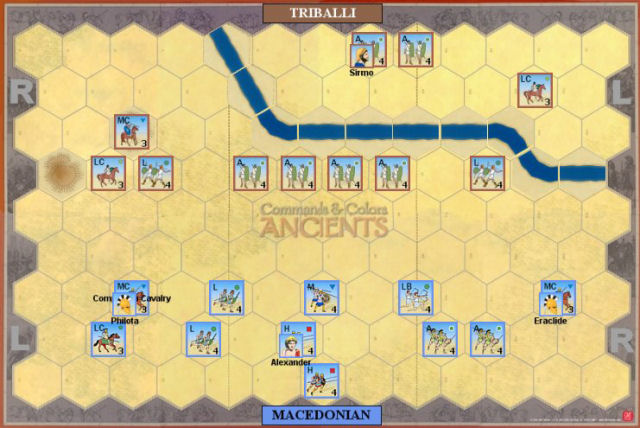