Written by Andrea Tosti. Posted in Alexander the Great (338-323 BC)

Historical Background
While Alexander was campaigning in the NorthWest of Macedonia, fighting against the Illyrians and the Taulantians near the city of Pelium, the Thebans, having given credence to a rumour about his death in battle, had risen in revolt. Informed of this rebellion and after having finally defeated the above-mentioned tribes, Alexander marched with formidable speed toward Thebe, reaching the city in only 2 weeks and thus preventing Thebe from gaining potential allies among the other Greek cities. The Thebans not only denied Alexander’s peace proposals but also attacked with their light troops and archers the Macedonian camp, that was placed near Cadmea, where a Macedonian garrison was being besieged. The assault was begun by Perdicca’s “taxeis”, that did not wait for an explicit order by Alexander, but was then followed by the entire Macedonian army in the attack. In fact Perdicca’s “pezeteri” were soon supported by the Agrianians and the Cretan archers, with the latter losing in the battle also their commander, Euribote. The Theban resistance changed into a real counterattack but, in doing so, the Thebans lost their ranks and then had to face the Macedonian phalanx advancing through the opened city gates, meanwhile Cadmea garrison made a sortie out. At this point the defensors flew away and the battle turned into a real slaughter, with Alexander ordering the complete destruction of the rebel city as a warning for all the other Greek cities.
The stage is set. The battle lines are drawn and you are in command. The rest is history. 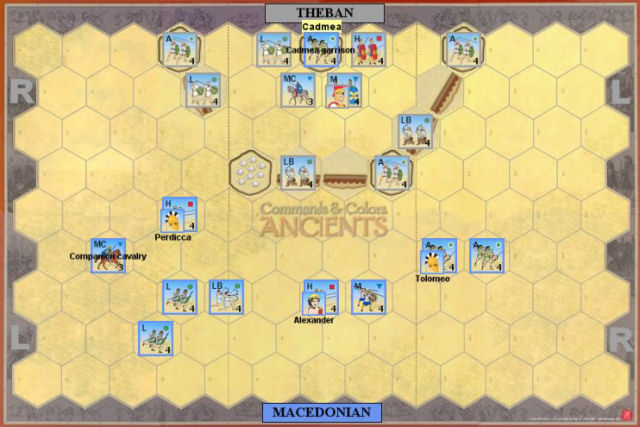 Moves first with an automatic “Order 3 units left” (Macedonian player initially draws only 4 cards), one of which must be Perdicca’s Heavy Infantry.

Special Rules
Alexander and Companion Cavalry rules (expansion 1). Cadmea garrison ignores one XSW and all BAN results until in Cadmea; it may not attack nor leave it until 2 other Macedonian units enter Thebe walls (hexes with the defensive tiles and hex G5, and hexes within).
Theban units ignores all BAN results while on “I” row.

Sources A.Frediani: ”Le grandi battaglie di Alessandro Magno” Newton&Compton 2004. Arrian the Nicomedian: “Anabasis of Alexander”. Rizzoli 1994. Book I, 7:7-10;…8:1-8. “Alexander, leaving from Onchesto, the day after pushed on to the neighbourhood of Thebe, near the sacred precinct of Iolao; he placed the camp here, still allowing the Thebans more time in order to change their mind and send to him an embassy. But the Thebans not only did not offer anything acceptable for an agreement, but their cavalry together with many light troops run out of the city and reached their camp, with the archers firing at the outposts and killing a few Macedonians. Alexander, too, sent out some light troops and archers in order to repulse their raid. And these troops easily drove them back while they were already attacking the camp. The day after, with the entire army near the gates that lead to Eleutere and Attica, he did not attack neither at this time but he placed the camp not so far from Cadmea, in order to support its garrison. In fact the Thebans were guarding the Cadmea after having surrounded it with a double fence, so that nobody could bring some help from outside nor the garrison could sortie while they were attacking the sieging army. … Tolomeo, Lago’s son, tells that Perdicca, who had been assigned to guard the camp with his squadron and who was not so far from the enemy’s fence, without waiting for an Alexander’s battle signal, first assaulted the fence and, after having swept it away, launched himself against Theban garrison. Aminta, Andromene’s son, followed him, as he was drawn up together with Perdicca, and led forward his squadron too, as he saw Perdicca crossing the fence. Having seen that and fearing that they, being isolated, could be put in danger by the Thebans, Alexander advanced with the entire army. He ordered the archers and the Agrianians to jump beyond the fence while still holding outside the Agema and the hypaspists. Then Perdicca, trying to get over the second fence, was wounded; he was brought back to the camp dishevelled and he barely recovered from the wound. Anyway those who advanced with him, together with Alexander’s archers, enveloped the Thebans in the road leading to Eracle’s temple. And they pursued the retreating Thebans toward the Eracle’s temple, but afterwards, as the Thebans made a wheeling maneuver at war-cry, the Macedonians routed; Euribote, the cretan commander of the archers, and about seventy of his men died; the others escaped near the Agema and the royal hypaspists. Alexander meanwhile, having seen his troops retreating and the pursuing Thebans that abandoned their ranks, attacked with the aligned phalanx; this pushed back the Thebans into the gates; and the Thebans were so frightened that, escaping they did not manage to close the gates. … And, reached the Cadmea, from there some of the Macedonians together with the garrison came down the Anfeo into the city, others, after having occupied the walls during the attack, rushed into the city square. The Thebans that were still drawn up resisted for a while on the Anfeo; but as the Macedonians with Alexander, who appeared now here now there, pressed them around, the Thebans cavalrymen rushed down through the city into the plains and the infantrymen escaped, everyone as he could. Afterwards the Phoceans, the Plateans and other Beotians, not so much the Macedonians, confusedly killed the Thebans that did not defend themselves anymore, some of them while in their houses, others while fighting, others more while imploring into the temples, without saving women and children.” Acknowledgments. Thanks to Roberto Flaibani for playtesting and useful suggestions.