Attila had a pretext for invading Gaul. Honoria, the older sister of the Western Roman Emperor, appealed directly to Attila to escape an arranged marriage.
Attila eagerly accepted the ‘proposal’ and demanded a dowry of half the Western Empire. The Emperor refused and ordered Aetius, a very capable soldier and diplomat, to build a coalition army to meet the expected invasion. His Roman units and their Gallic auxiliaries formed less than half of the army. The remainder were Alans and Visigoths who reluctantly joined because their fear of the Huns was greater than their hatred of the Romans. Attila’s army contained even more nationalities, but the superb Hun horsemen were the largest component. On the day of battle, both commanders formed their armies into three divisions as was customary. Attila’s right flank consisted of an ad hoc collection of subject nationalities - primarily Franks, Gepids and Burgundians with no overall commander.
The Gepids were most numerous but had lost heavily covering Attila’s retreat from Orleans. The Ostrogoths made up Attila’s left wing. In the center were the fearsome Huns. Attila expected his Huns to face the Romans, but Aetius had other plans. He had received rumors of possible Alan perfidy, and placed that contingent in the center, bolstered by the Romans on the left and the Visigoths on the right. Attila first tried to outflank Aetius by attacking the Romans with Huns from his center, but the attack failed. Tellingly, the Germanic right wing held back. Attila then launched his main attack against the Alans in the center, but they resisted fiercely before being overwhelmed. The Huns pursued the Alan remnants, ignoring the untouched Romans on their flank. Aetius promptly attacked the Hun’s exposed flank while sending part of his wing to push back the wavering Gepids. At the same time the Visigoths routed the Ostrogoths on the other flank and were attacking the Hun’s left flank and rear. Attila knew his army would be destroyed if he held his ground, so he ordered a rapid retreat to his wagon laager camp.
.
The stage is set. The battle lines are drawn and you are in command. Can you change history? 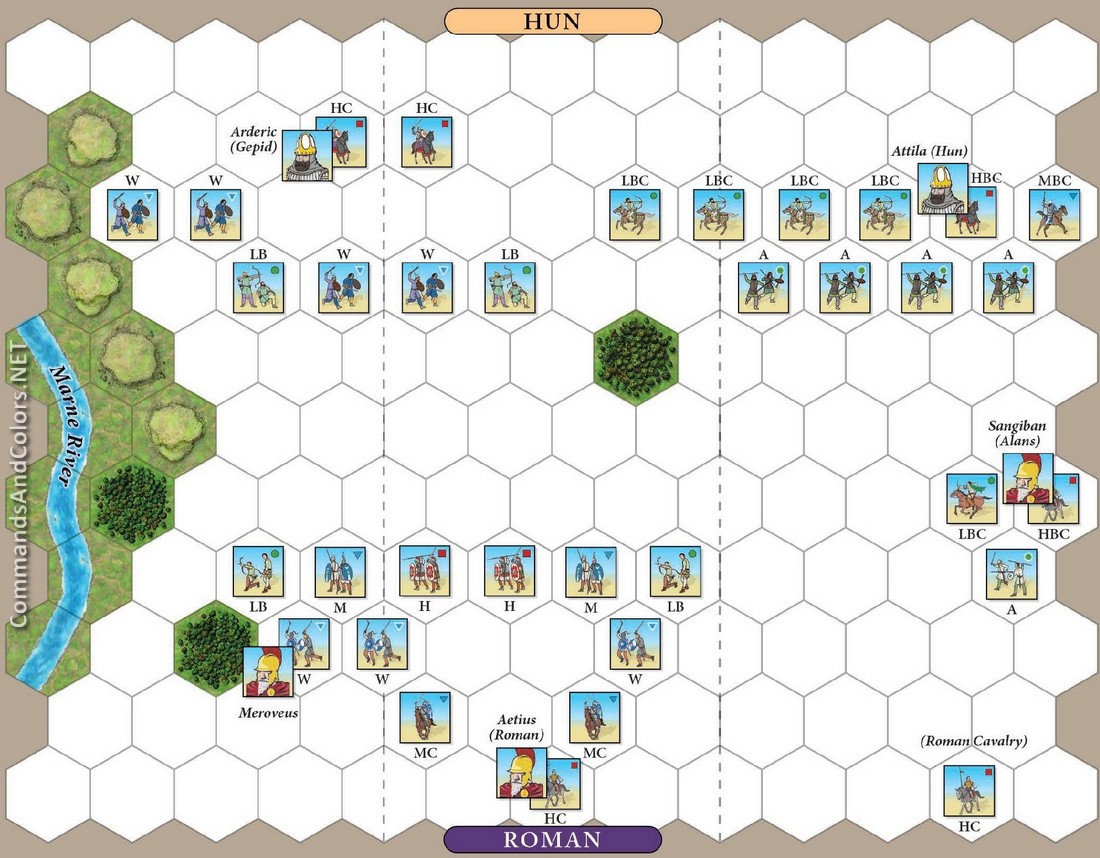 serpentium replied the topic: #757 3 months 3 weeks ago
Roma 7 Unni 4
Magmik replied the topic: #603 1 year 10 months ago
Huns win 7-4
Rashkolnikov replied the topic: #374 2 years 5 months ago
In my opinion the Roman side to have a chance of victory must rearrange the troops in the first part of the game. The left/center side is under the charge of the Hun's warriors, and the two heavy troops are too weak in the first part of the battle. The three Roman HC cavalry are set too far from the other troops, it's impossible for the Alans cavalry to break into the line of Attila. Hun have to do one thing: advance.
esparver73 replied the topic: #350 2 years 7 months ago
Both sides used heavy cavalry charges to break the enemy center, with some spectacular successes, but also losing many units in the process. The Gepids withstood the Roman assault thanks to their warrior units while on the Hun left the Huns proper managed to push the Alans to the edge of the board and rout them for a 7-4 victory.

"I have six locks on my door all in a row. When I go out, I lock every other one. I figure no matter how long somebody stands there picking the locks, they are always locking three."--Elayne Boosler