Written by alecrespi. Posted in Rules

If there is no elevation difference between the attacking and the target unit, simply trace the straight firing line (using a ruler or a piece of paper) between the center of their two hexes (i.e., the hex of the firing unit and the hex of the target unit). If there is no blocking terrain between these two points, a clear line of sight is established and the attack may proceed. If the firing line, at any point, intersects a hex containing blocking terrain, no LOS can be established and the attacking unit is not eligible to attack.
Blocking terrain includes woods hexes, building hexes, and any hex of a higher elevation than that of the two units.
Note that the entire hex of a blocking terrain hex blocks LOS, regardless of the actual artwork on the map board.
Other effects (such as smoke markers) may also cause a hex to block LOS.
Blocking terrain does not block LOS to units in that hex. For example, if a squad is in a woods hex, that woods hex does not block LOS to itself. Only blocking terrain hexes between the two units block LOS.
Before playing your first game, make sure to read about terrain and its effects on pages 45 through 47 of this rulebook. Terrain effects are also summarized on the back of the Scenario Guide.

If the firing line between the target unit and the attacking unit is traced exactly along the edge of a series of hexes, the firing player must shift the firing line either slightly to the left or right, away from the hex edge, so that it does not trace the hex
line exactly. If shifting the line in both of these directions causes the LOS to be blocked, then no LOS can be established and the target unit is not eligible for attack. If the line can be shifted so that a clear LOS can be established in one (or both) of the two directions, then LOS can be established and the attack may proceed. See the “Determining Line of Sight Along a Hex Edge” diagram and examples C and E in the “Line of Sight” diagram for more information.

Determining Line of Sight Between Units on Different Levels of Elevation

When the attacker and the proposed target are at different elevations, determining LOS is a bit trickier. In this situation, follow the rules below.
When two units are of different elevations, the attacking unit may be able to fire “over” some blocking terrain between the units. To determine whether LOS exists between units at varying elevations, rather than checking whether there is blocking terrain between the two units, players must ensure that the lower unit is not located in a blind hex. If the lower unit is indeed located in a blind hex, LOS cannot be established and there can be no attack.
To determine whether the lower unit is in a blind hex, do the following:

The closest obstruction may be a blocking terrain hex, as when establishing LOS between units at the same elevation. Also, when dealing with varying unit elevations, a hill the same level or lower than the unit on the higher elevation is also considered blocking terrain for the purpose of determining blind hexes.

As when two units are at the same elevation, if the firing line between them is traced through an elevated hex higher than either of the two units, LOS cannot be established and the attack cannot proceed.

The following two rules are exceptions to the LOS rules.

Regardless of elevation difference, two adjacent units always have LOS to each other.

Firing Across a Plateau

If the unit on the higher elevation must fire (or be fired upon) across an adjacent hex at its same level, it is considered to be hidden by a plateau, and no LOS can be established. Thus, the higher unit must be on the “edge” hex of a hill in order to establish LOS to a lower target, and vice versa.

Determining Line of Sight Along a Hex Edge

When determining line of sight, it is possible that the firing line will be drawn directly along the edge of one or more hexes. When this happens, line of sight is not blocked unless there is blocking terrain on both sides of the line. When LOS runs along a hex edge, draw two new lines parallel to the main line, shifted slightly in either direction. If both of these new lines pass through blocking terrain (the example on the upper left), then LOS is blocked. If one or both of these lines does not cross blocking terrain (the example on the upper right), there is a clear line of sight between the two units. 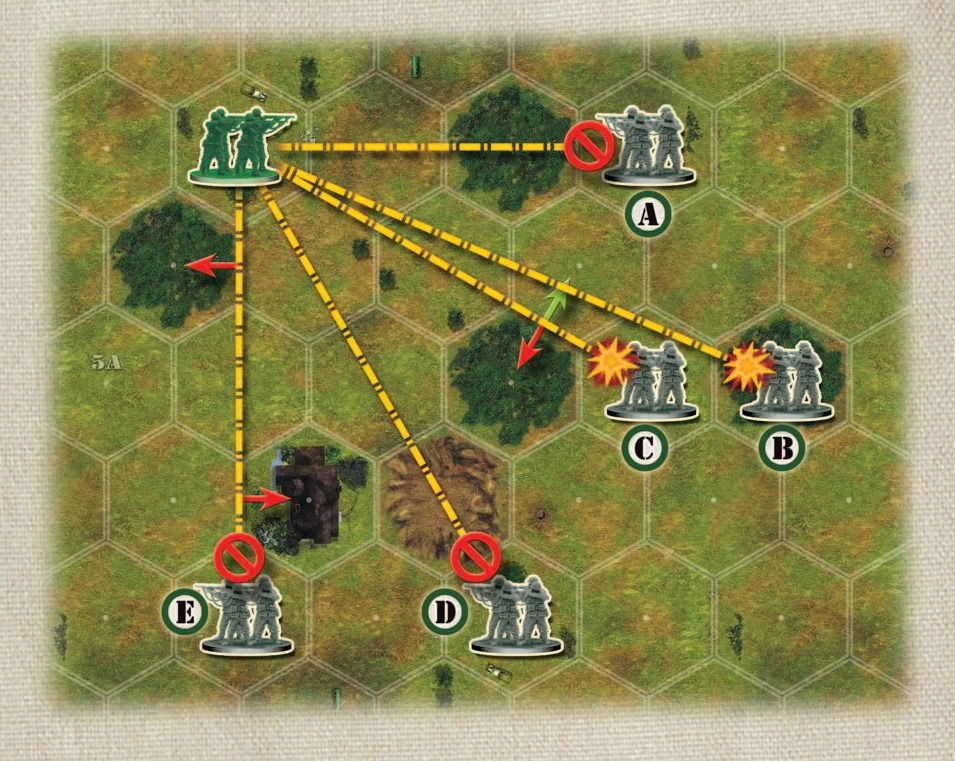 This diagram shows an American squad determining LOS to several potential targets on the same elevation as the attacking unit. 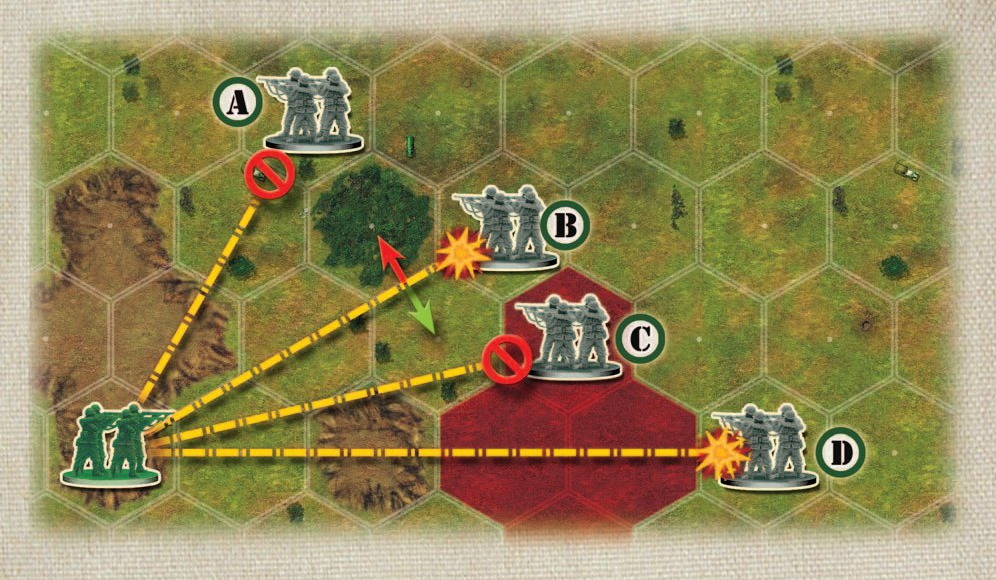 This diagram shows an American squad determining LOS to several potential targets. The American squad is on level 1 terrain, while the German squads are all on level 0 terrain. Being on higher elevation allows the American squad to see over blocking terrain, although the terrain still has some “blind hexes” immediately behind it.

The location of all blind hexes are shown in red and yellow. Blind hexes that are in yellow are due to the plateau effect rule.

Map 1
This is the basic map without any hexes marked. It is include as a baseline as some of the terrain becomes obscured when a color overlay is applied. There is only 1 terrain overlay used, a single hex tree. 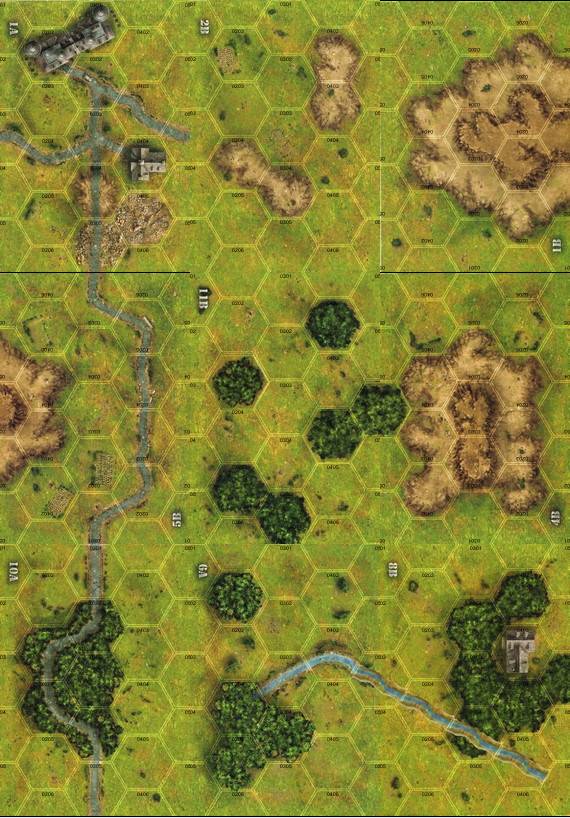 Map 2
Shows all of the blind hexes from a level 2 vantage point. 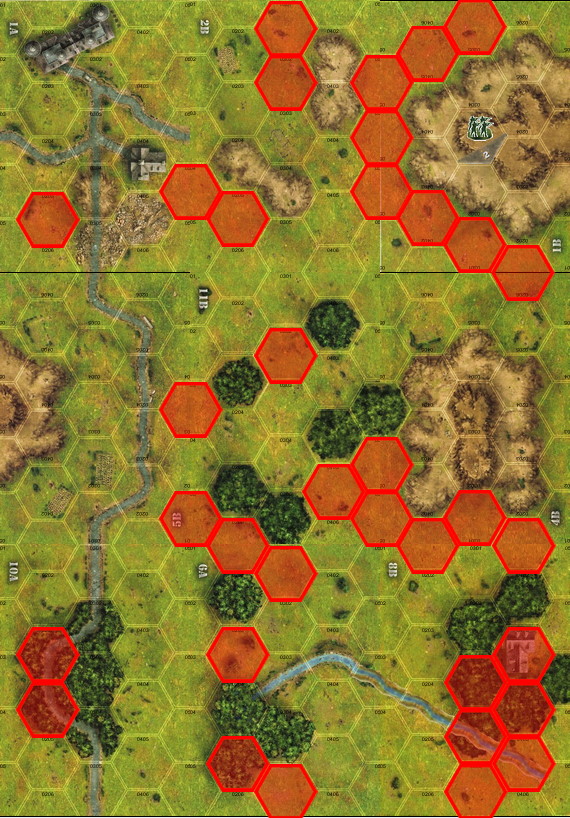 Map 3
Shows all of the blind hexes from a level 1 vantage point. This map shows the effect of the plateau rule (yellow hexes). 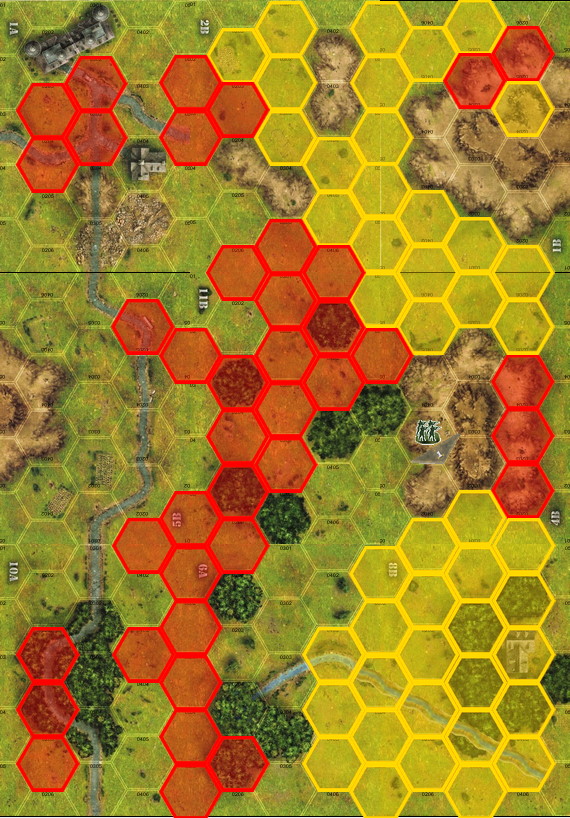 I'll come back as soon as I can with as much as I can. In the meantime, you've got to hold! (As spoken to General Wainright in March of 1942)