The confusion of battle and challenges of command and control are provided through command cards, combat cards and HQ tokens that limit what can be done each turn and custom dice are used to resolve the effects of any combat that occurs.

The game includes scenarios to allow the re-enactment of battles such as Loos, The Somme and Vimy Ridge as well as many other actions. The board can be reconfigured using terrain tiles to reflect any battlefield of the period and allows additional scenarios to be created.

This is the first game in a series that will in time cover all aspects of the war on land with additional figures including cavalry, tanks and artillery and additional nationalities (France, USA and Russia) being added in subsequent modules.

Future expansions will add other new mechanics and game elements, and open up more opportunities for player-vs-player action.

Command cards are used to order troops to move, battle, or do something special. Units may only move or battle when given an order.

These cards represent military actions and sometime unexplainable WWI happenings or unit abilities. These cards may hinder the opposition army, enhance a player’s units, or may instantly change the course of a battle.

Advance over the top

Hold at All costs

Three on a Match 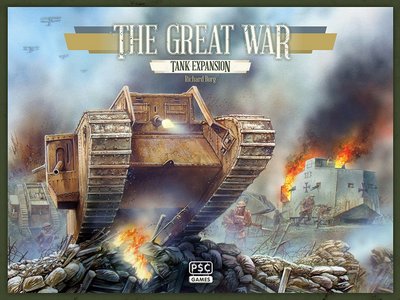 We are running a Kickstarter campaign to help fund the production costs of the first print run!

In this second expansion for THE GREAT WAR, we focus on battles involving the French army. The French army, like other European powers, prior to the war was caught up in an arms race of sorts and when Germany declared war on Russia, on 1 August 1914, France honored their treaty with Russia and mobilized to meet an expected German offensive. Germany, as anticipated, marched through Belgium, and as they say the rest is history. Early on in the war on the Western Front, France would fight in many battles and campaigns: Marne, Ypres, Champagne, Somme, Frontiers, Lorraine, Charleroi, the “Race to the Sea” and Verdun. It is the latter, The Battle of Verdun, which is the main focus of the scenarios in this second expansion. That is not to say that the engagements prior to Verdun or following were of less importance. Rather, the Battle of Verdun, lasting from February through December 1916, is a testament to the strength and fortitude of the French Armed Forces.

For the official scenarios prior to this expansion, players should refer to the Scenario Special Personnel Deployment listing, which will recommend the number of special personnel figures that can be deployed for each side in a scenario.
In this manner, any scenario can be customized by adding special personnel figures of your own choosing prior to the start of a game.