Attila’s army advanced into Gaul, leaving behind a trail of destroyed, plundered cities. His army was delayed at Orleans when the Alan inhabitants resisted effectively. The Alans were one of several Germanic tribes pushed west earlier by the Huns. They were granted permission to settle in Gaul in return for a pledge to fight invading forces. While Attila ravaged, Aetius assembled his army. The Visigoths were the major non-Roman component. Initially they were leaning toward joining Attila, but Aetius, the able diplomat, convinced them that servitude to the Huns was far worse than cooperation with the Romans. This Roman-Visigoth army surprised Attila’s besieging army at Orleans and forced it to retreat with significant losses.
The Alans also joined in the pursuit, but Aetius had information that they still intended to defect. When the day of battle dawned near the Marne River, Aetius placed the Alans in the center between his reliable Romans and hopefully reliable Visigoths. The Visigoths faced their traditional enemies, the Ostrogoths, and both tribes quickly joined battle. The Visigoths gained the upper hand and pushed the disorganized Ostrogoths back. Meanwhile Attila launched his main attack in the center with masses of Huns charging the outnumbered Alans, who proved their loyalty by resisting fiercely. Numbers prevailed and finally the remnants of the Alans broke and fled with the Huns in hot pursuit. As on the left, the Huns ignored the Visigoths on their flank, but it proved to be their undoing. During their advance against the Ostrogoths, the Visigoth King, Theodoric, was killed. His death sent the Visigoths into a frenzy of anger. In short order the surviving Ostrogoths were routed off the field, and then the Visigoths turned and smashed into the Hun’s flank and rear. The slaughter was immense, including most of Attila’s personal guard.
Attila sounded the retreat and the remnants of his Huns scattered back to his camp as darkness approached. At dawn Attila prepared to defend his camp, but Aetius did not attack, deciding that his allies would remain loyal if a common enemy remained a threat. Attila withdrew his army unmolested.
The stage is set. The battle lines are drawn and you are in command. Can you change history? 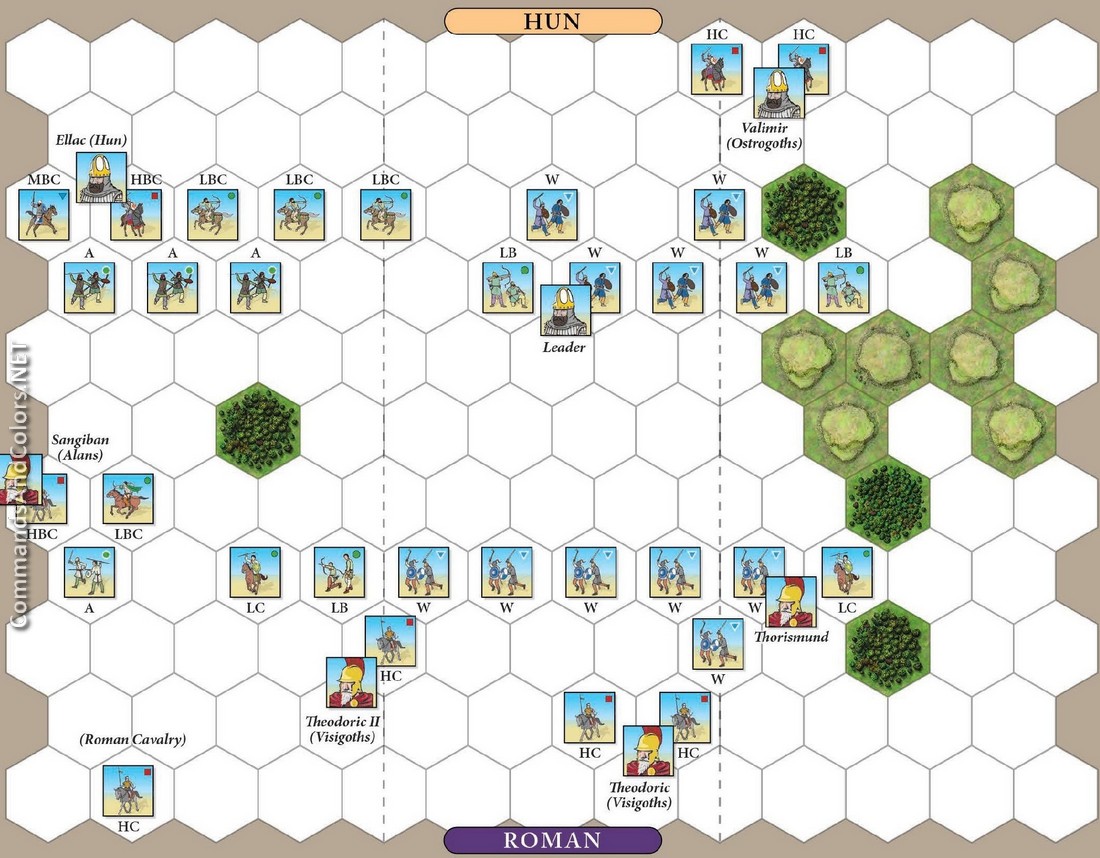 apergis1@verizon.net replied the topic: #746 5 months 2 weeks ago
In spite of the Victory Results posted above this is a very balanced scenario for us.
My wife and I have played it six times. The result were three victories for each side.
Only one game was a blow out. There rest were decided by just one flag.
We have played the first three scenarios, and we think that they are all very balanced.
clavain replied the topic: #620 1 year 10 months ago
Played solo, Roman win 8-7
Magmik replied the topic: #604 1 year 10 months ago
Romans win 8-3 (finished the round after 7-3)

"Outside of the killings, Washington has one of the lowest crime rates in the country."~ Mayor Marion Barry, Washington, D.C.