Tactic cards allow ordered units to move and/or battle in ways not normally allowed in the basic rules. Terrain movement and battle restrictions still apply when a Tactic card Actions take precedence over basic rules. An attached leader may not be order to detached and move separately when a Tactic Command card is played on a turn, unless stated otherwise on the Tactic card. When the number of units to be ordered is not a fixed number, but instead the card states “for each Command card you have, including this card” the number of units a player may order is equal to the number of Command cards in the player’s possession, including the Command card currently being played.

At the Quick Step: All infantry unit’s normal movement is considered 1 hex, even for Highland infantry. 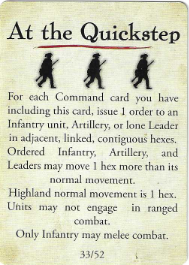 First Strike: A unit that has an First Strike card played on it and battles first, may not battle back.

Inspired Leader (Left, Right, Center): Inspired Leader Command cards order one leader and the unit with the leader if any, and up to 4 units and/or lone leaders in a string of adjacent, linked, contiguous hexes to the leader that was ordered. The string of units that are ordered may extend across sections of the battlefield. After movement, units without a leader that are in a hex adjacent to the ordered leader, will combat with 1 additional die.

Line Command & Line Volley: Line Command and Line Volley Command cards order all unit types, Infantry, Cavalry, Artillery and lone leaders. This line of units and leaders has to be in adjacent, linked, contiguous hexes and may extend across sections of the battlefield.

Line Volley: A unit ordered by the Line Volley card may not melee. Therefore, if an enemy unit in the line that is ordered is adjacent to an enemy unit it may not fire. This may also be the case when an enemy unit is forced to retreat onto an adjacent hex next to a unit that has not yet fired. The adjacent enemy unit will prevent an ordered unit from doing ranged combat.

Rally: The card may be used to rally and return blocks to more than one unit.