Class: In the Tricorne - Jacobite Rising there are four basic infantry unit classes:

In the 1700’s there were two distinct societies in Scotland. In the lowlands, the people were a mixture of all the races that had invaded England and the Isles. Lowlanders spoke a version of English and lived in a society based on the emerging mercantile economy. The Highlanders, on the other hand, were largely Celtic in ancestry with a sprinkling of Viking and a few other races. The Highlanders lived in a largely feudal society based on loyalty and power, not money.

In the Tricorne - Jacobite Rising there are two classes of cavalry, battle and light. Historically cavalry units throughout this period can at best be classed as light, but in some battle scenarios cavalry actions did impact the battle’s outcome and in these special cases the game has stylized the cavalry units and classed them as battle cavalry.

In the Tricorne - Jacobite Rising, in addition to leaders that are pictured as mounted, each army may field in some scenarios special units that have a Clan Chief marker for the Jacobite army or a Chief Offcer marker for the Government army.

Movement in Hexes: Is the number of hexes a unit may move when ordered.

Morale: The number of flags a unit may ignore, and when the unit does retreat, lists the number of hexes the unit must retreat for each flag.

Rally Check: Number of additional dice a unit will roll when making a rally check. 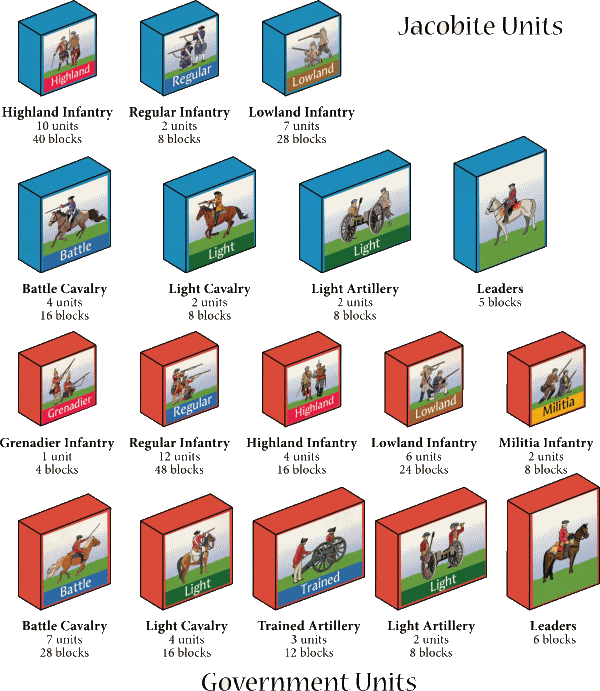