On March 14, 1781, while encamped at Deep River, Cornwallis was informed that Greene was encamped at Guilford Court House. Cornwallis decided to give battle, although he had only 1,900 men at his disposal. Cornwallis found the Continental positions in three lines near the courthouse. The first line, blocking the road and deployed behind a rail fence, was primarily untested militia. Greene had instructed the militia officers to have their men fire two volleys and fall back. Following a short barrage, Cornwallis sent his troops forward. The British pressed the first and second Continental lines back with bayonet charges and superior discipline and at ninety minutes into the battle, British troops reached Greene’s third line. Keeping the pressure up, the British Guards attacked and the Continental flank broke and fled.
William Washington’s Dragoons charged into the enemy’s ranks, attempting to stop the advance, but were thrown back. With the British nearing his third line, Greene ordered a withdrawal, giving the British a tactical victory, but enabling Greene’s army to remain mostly intact.
The stage is set. The battle lines are drawn and you are in command. The rest is history? 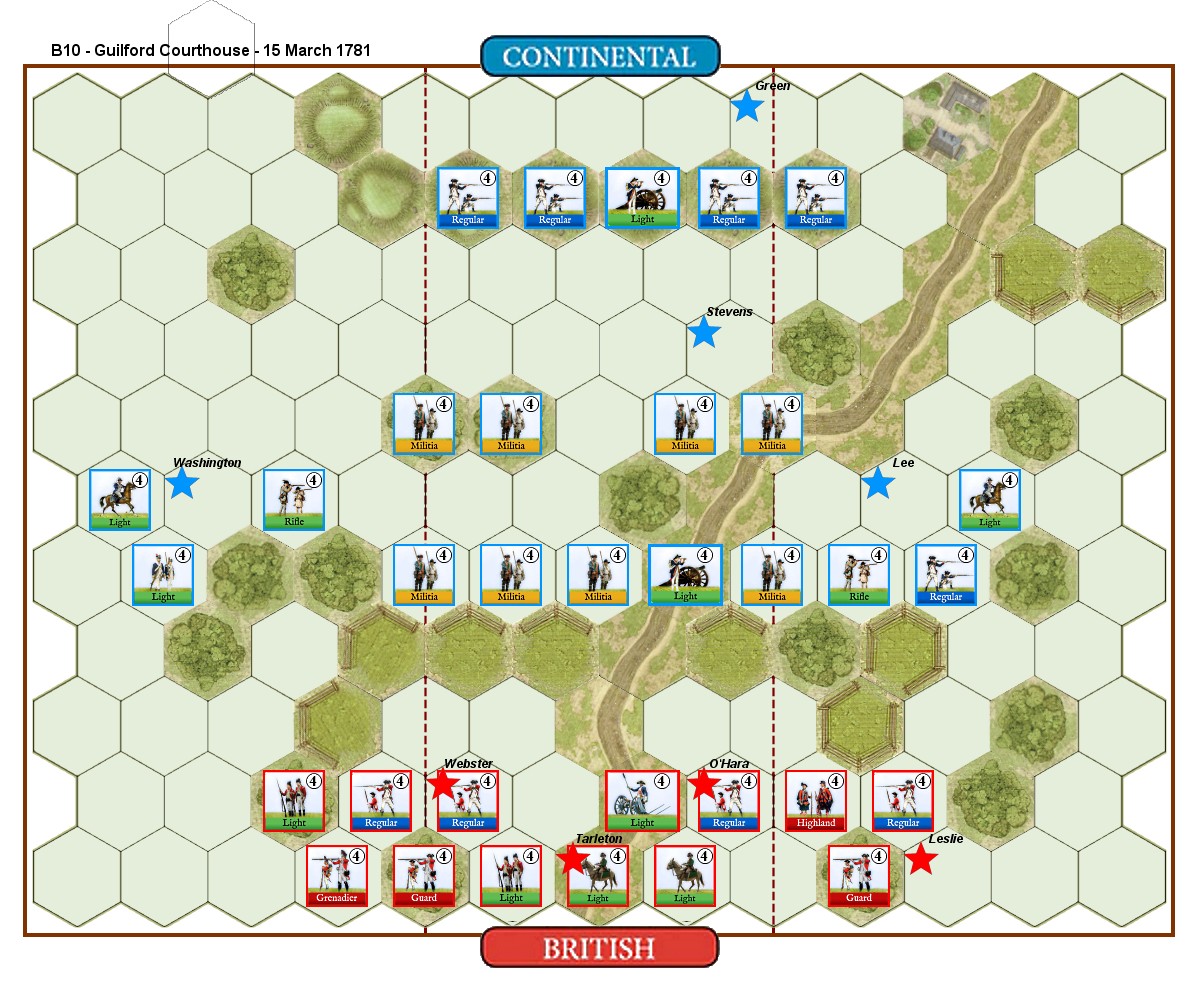 mirkobruner replied the topic: #504 1 year 5 months ago
Militia can retreat 2 hexes after cannonading, but actually for the center units (there are 2 militia and 1 artillery), two of them (including the artillery) cannot go anywhere. There aren't simply enough free hexes.What to do? Suggestions?
rjvonline replied the topic: #457 1 year 6 months ago
First game, playing the Continentals. I chose to keep the militia in the center where they were. By the end of the game, I still had 7 militia units (lost 1). My center held. My right under Washington took casualties. My right did ok. I was up by several flags, but a late surge by the Brits netted 3-4 units from failed rally rolls (even one unit at FS). However, I closed the deal with my artillery firing at his grenadiers in the center, who failed their rally roll. 10-6 final score.

NightOwl3 replied the topic: #352 1 year 9 months ago
This was my first game of Guildford Courthouse. I had not played in some time and was rusty. The British got some good hits in early against the militia, but three times a one block militia unit held on its rally check. The Americans kept pulling back towards their base line. Once I realized that the British would not be able to take the hills with the fresh American regulars, I shifted the British line to its right flank to hit the weaker militia and spent rifle/regulars there. It was still very close at 9-9 and could have gone either way. However, a British unity with a leader was able to take out a spent artty and militia unit to win the day. A great scenario. I need to learn how to play the British better.

Mark McG replied the topic: #229 3 years 2 months ago
This c
scenario seems one of the best of the Tricorne base set. Each side has all 3 arms, and the American quantity is a decent match for the British quality. Recommended.
Read More...