Major General Nathanael Greene, commander of the Continental Army in South Carolina, divided his forces sending Brigadier General Daniel Morgan to attack the British back country fort, Ninety-Six. Cornwallis dispatched Banastre Tarleton to catch the Continental forces. Morgan prepared for the encounter with Tarleton by backing his men up to a river at Cowpens just north of Ninety-Six. As Tarleton’s men attacked, Morgan instructed the militia to skirmish with them, but to leave the front line after firing two rounds. The British mistook the repositioning of the Continental militia as a rout and ran into concentrated fire from Morgan’s third line, on the hill, which was manned by his best troops. This unexpected volley coupled with a cavalry charge proved too much for the British and nearly half of the British and Loyalist infantrymen surrendered. Tarleton escaped, but Morgan’s troops had decimated his attacking force.
The stage is set. The battle lines are drawn and you are in command. The rest is history? 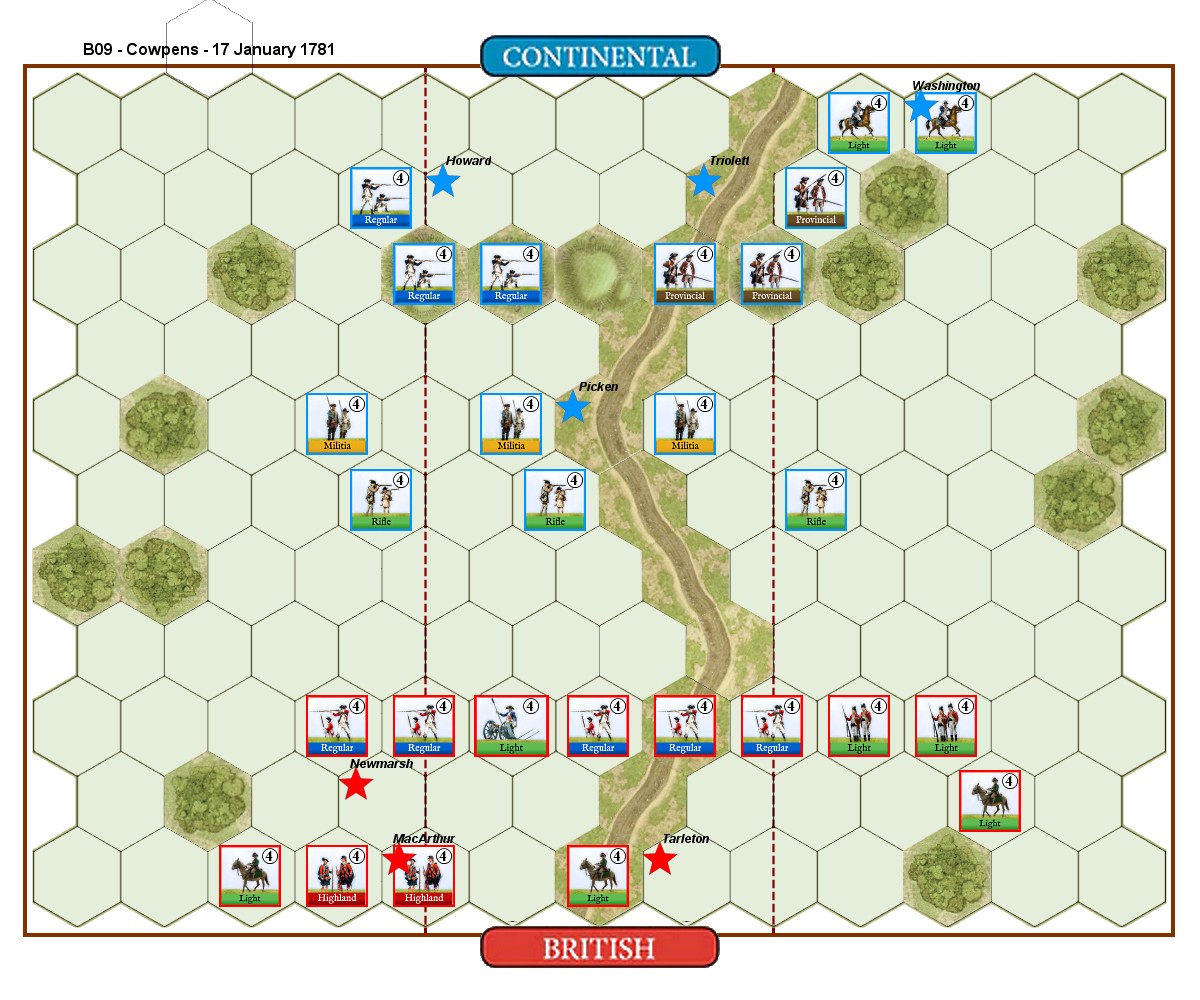 ozzie replied the topic: #267 3 years 1 month ago
A 7-3 win to the Americans. The long rifles fired, damaged the British artillery and retired. The British advanced and shot and surprisingly routed a long rifle unit. The Americans retired all the militia and light infantry with a Steal a March card and formed a solid battle line across the hills. The British advanced on the left pushing the highlanders and some regulars forward. An all-out assault saw the Americans lose a couple of units but the British lost both Highlanders, a general carried away in rout and both units standing next to him. The 16th Dragoons tried a mounted charge which caused damage but did not throw the victorious American right back. The Dragoons were fired upon and lost 2 bases. A long shot from a rifle unit caused a retreat and the Dragoons were reduced to 1 base as they retreated and then failed the rout test. 7-3 and the British left was entirely wiped out.

ozzie replied the topic: #184 4 years 4 months ago
A 7-4 win to the British. The first 2 rounds of British fire saw two American Rifles and a Militia unit each take a hit and then rout from the field. The Americans were taking sustained damage but then played two Rally cards in succession and put most of their damaged units on their right flank back to full strength and the British turn to suffer with 2 Regular units and a Highland unit being shot to pieces and routing. The British right and centre advanced and delivered two Line Volleys which left the American centre and left reeling with a Provincial unit and General Triolett fleeing the field. A bayonet attack from the British Lights and some Regulars decimated the damaged American centre and broke multiple units plus General Picken. Historically, this American army had its back to a river so on this result history was reversed and the Americans would have been destroyed and Tarleton regarded as a hero. A well balanced scenario and the game mechanisms played out very well.
Read More...