British General Augustine Prevost, after failing to capture Charleston in early May, retired to James Island and set up fortifications guarding Stono Ferry. The work finished, Prevost left for Savannah and shortly after his brother, who was then in command, also left for Savannah along with most of the garrison guarding the Ferry. The under-strength command fell to John Maitland. Informed of the weakened British positions, Continental General Benjamin Lincoln broke camp on June 19 and arrived at the Ferry after daylight on the 20th. Although Lincoln ordered his troops to hold their fire and assault with the bayonet, their advance halted after receiving fire from the British positions and degenerated into a fire-fight. The South Carolina militia, however, managed to push the Hessians back, but Maitland shifted troops to the left to reinforce the Hesians and the militia retired.
Lincoln, realizing that he could not force the position, ordered a retreat. Maitland immediately ordered the British to pursue. A Continental cavalry charge and a valiant stand by the Virginia militia held off the British long enough for Lincoln to extricate his army in fairly good order. 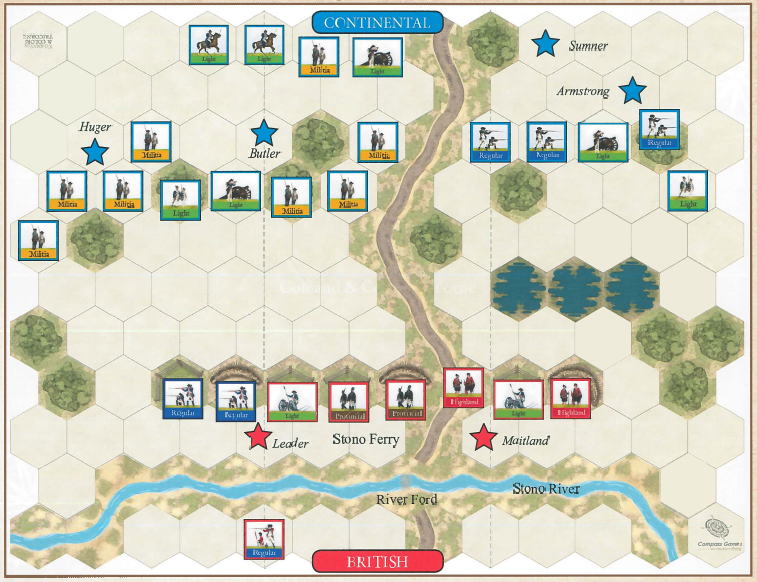 • Opening Cannonade rules are not in effect.
• The Continental player will gain 1 Temporary Victory Banner Objective at the start of the turn when a Continental unit occupies a field works hex.
• The Stono River is impassable