The occupation of Savannah by the British was part of their strategy to bring Virginia, the Carolinas and Georgia back under royal control. General Prevost commanded the British defences, while Comte d’Estaing’s and Benjamin Lincoln led the joint French and Continental forces. On 23 September, Prevost rejected an offer to surrender. The French commander then ordered the bombardment of the city. When the bombardment failed to have the desired effect, d’Estaing, against the advice of many of his officers, launched an assault against the Spring Hill defences on October 9. British resistance was stiff, but the attacking soldiers managed to break into the British works. A counterattack, commanded by John Maitland, drove the French and Continentals back. Pulaski, seeing the line pulling back, advanced with his cavalry, but was mortally wounded during the charge. Unable to exploit the breakthrough, the French and Continental troops were ordered to fall back. Lincoln wished for another assault, but was overruled by d’Estaing and on October 17, the siege was abandoned.
The stage is set. The battle lines are drawn and you are in command. The rest is history? 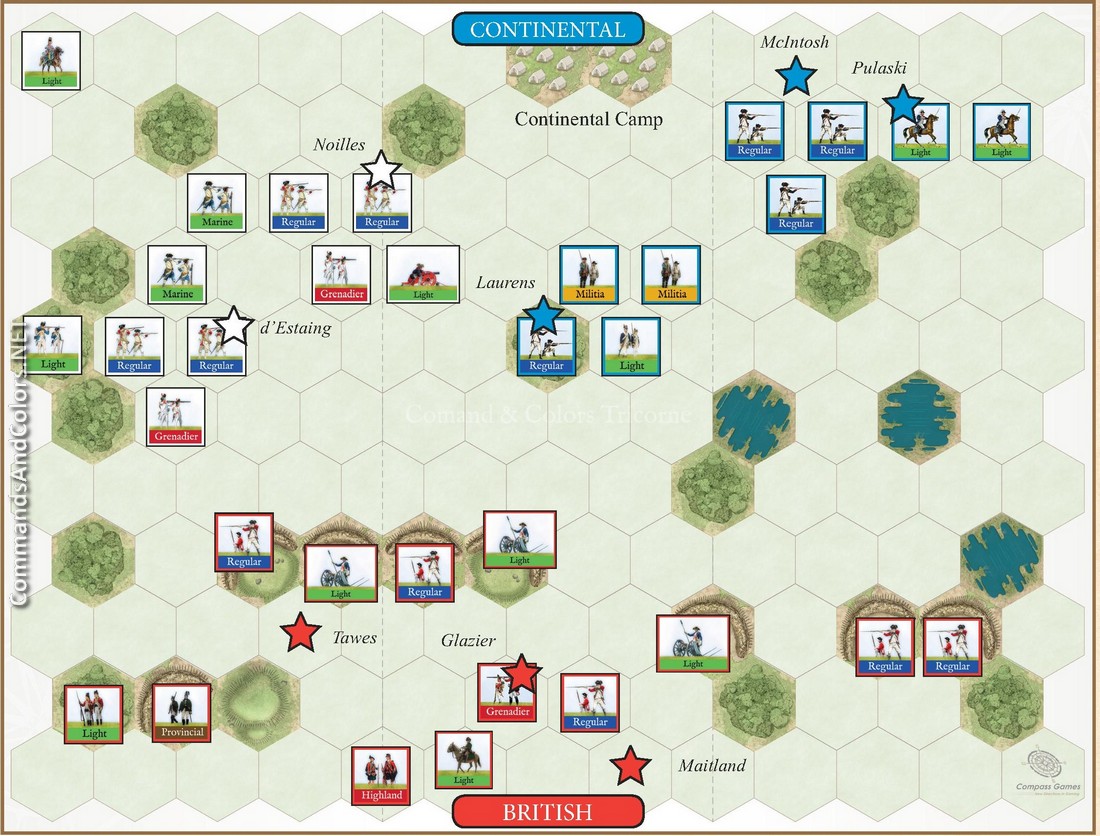 Hawkmoon replied the topic: #645 1 year 3 weeks ago
An english victory : 9/2 followed by a french-american one : 9/4. In both battles, the 2 french generals were killed in action ! In the 2 games, the action took place in the french sector with fierce fights. A very interesting scenario to play.
clavain replied the topic: #600 1 year 7 months ago
New to the system and played the French to try to figure out best way to attack. Stupidly moved up my left flank units who ended up stuck nowhere with no cards, then my right piecemeal. Cleared out one field work on the British left which their Highlanders easily took back, and every time it looked like I was linking up my lines the British managed to break them up again. Then successive British line volleys did the business, killing two French leaders as well. 9-2 British.

ozzie replied the topic: #398 2 years 3 months ago
Managed one French win from 4 games which we reckoned was good going. However, once the French lead units were smashed the British were able to grind them down one by one.
Read More...