After Fraser was mortally wounded, the British retreated back to their camp. Arnold hearing of the Continental success rode out to join in the pursuit. The British had set up two redoubts near their camp, one was defended by Heinrich von Breymann, while the other was under the command of Lord Balcarres. Poor’s Continental soldiers attacked the Balcarres redoubt and Learned attacked the Breymann redoubt, while Arnold led a charge through the gap between the redoubts. Arnold’s horse was hit and the falling horse broke Arnold’s leg. What followed was a furious battle where both redoubts were taken, which forced Burgoyne to withdraw his army to Saratoga.
The stage is set. The battle lines are drawn and you are in command. The rest is history? 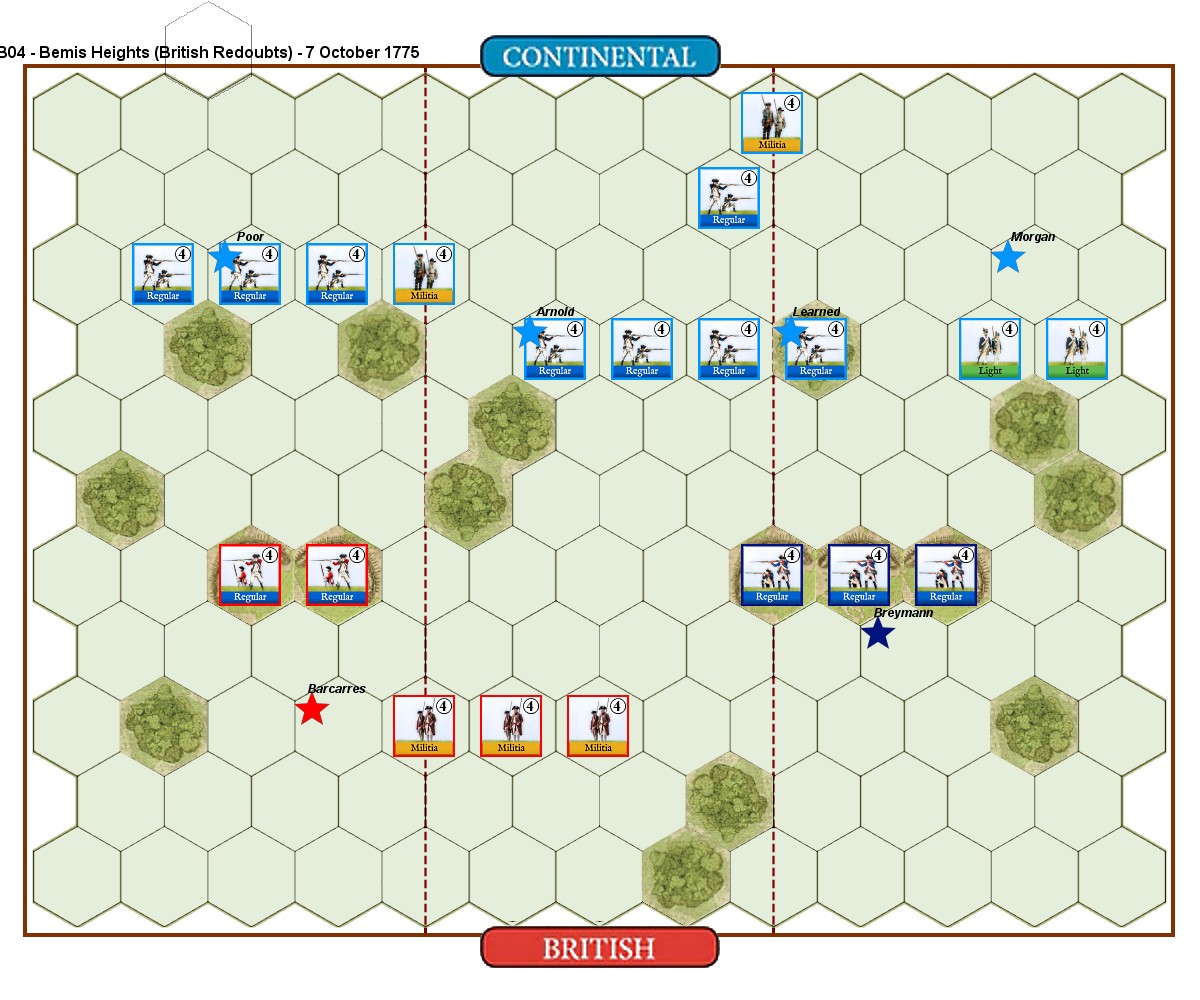 Note: A hex with a dotted line is considered as a center section hex for purposes of determining whether a side has no units occupying a section of the battlefield. (TAR French and More Expansion, see Page 8)

ozzie replied the topic: #271 3 years 1 month ago
No, I don't think so. The British must hold on whereas the Americans must attack (bit like the Bunker Hill scenario but with positions reversed). The fall of one redoubt has finished the game in all cases we have played. Historically the Americans took both with furious attacks but this doesn't come out with only 5 Victory Banners. The British stand more chance if the Americans have to fully assault on both sides of the field. I don't think 6 Victory Banners unbalances the scenario, just makes it more historically correct and plays out a slightly longer game. The 3rd Special rule has not yet contributed to any victory.

Perhaps removing the 3rd Special rule (about units in each section).

ozzie replied the topic: #268 3 years 1 month ago
A 5-4 win to the Americans followed up by a 5-0 win. We felt the Victory conditions of 5 Banners is at least one too few. The Amercians won both games by only needing to take one redoubt each time.
In game one the Brunswickers fought on bravely until being overrun. With two units and two redoubts lost it was a 4-4. Then a long-range shot from Arnold's regiment at the British Militia rushing to Breyman's aid saw it suffer a Flag and fail the rally and break.
In Game two, Balcarres' redoubt was assaulted with just a feint against Breyman's redoubt. The assault saw one British unit forced to retreat (3 flags rolled!). It fell back on to General Lord Balcarres only to rout and carry away Balcarres. The second British unit was forced to retreat and the redoubt was abandoned and Americans' smiling at 4-0. Then , once again, Arnold's regiment fired a long-range shot on the British Militia rushing to the redoubt's aid, rolled a flag and the Militia failed its rally to break. 5-0!
Once again, I feel the Victory Condition would be better as 6 Banners, 5 is too few to really do the scenario justice and force the Americans to go for both redoubts.
Read More...