The British campaign plan was to send General John Burgoyne from Canada, down the Hudson River and General Henry Clinton, up the Hudson River to capture Albany, which would spell the end of the American resistance in the Hudson River valley. Burgoyne’s march south was more difficult than expected giving the Continentals time to set up a defensive position on Bemis Heights. On the morning of the 19th, Burgoyne was within a few miles of the heights and ordered the army to advance. Fraser would turn the American left flank by negotiating the heavily wooded high ground north and west of Bemis Heights while Hamilton would make a frontal attack on the heights. Arnold realized such a flanking maneuver was likely, and petitioned Gates for permission to move his forces forward from the heights to meet this potential flanking movement. Gates grudgingly permitted Arnold a reconnaissance force, which met the British advance near Freeman’s Farm. The battle went through phases alternating between intense fighting and breaks in the action.
It finally turned in favor of the British, when Riedesel and the German troops arrived and threatened to turn the Continentals flank.
But as darkness began to set in, the Continentals retired back to their defenses, leaving the British on the field.
The stage is set. The battle lines are drawn and you are in command. The rest is history? 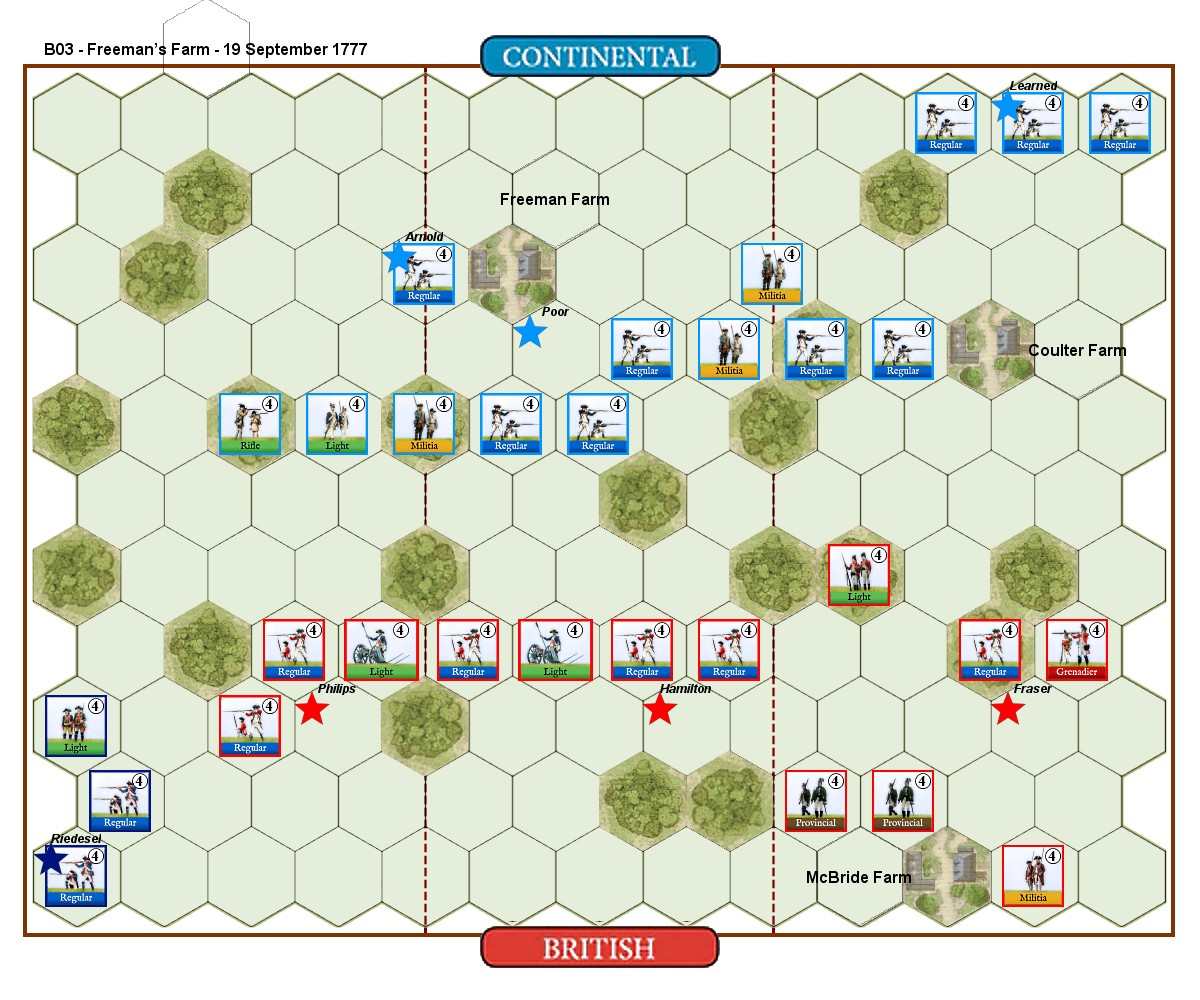 • Move First - To determine which side will move first, both players must select one Command card from their hand. At the same time, these cards are revealed. The player’s section card, that orders the fewest number of units and leaders, will move first, using the card that was selected. Tactic Cards do not count as fewest. The opponent will use his selected Command card and take the next turn. If tied the Continental player goes first.
• No opening Cannonade.

ozzie replied the topic: #265 3 years 1 month ago
A 7-3 American win where everything just went well for the Americans. Getting Learned's command moved up early seemed to be the key here using At The Quick Step early on in the battle to seize Coulter Farm. The grenadiers dealt out damage to multiple units but routed none until they themselves were destroyed. The British lights broke and ran on their first retreat as did 2 other British regular regiments whilst the Americans rallied again and again. The American's successful playing of the Rally card scored 5 reinforcements out of 5 dice to bring 2 units back to full strength, including Arnold's regiment and the light infantry who shot the British artillery to pieces. One of those games where good cards and good dice all came together for the Americans whilst a British bayonet charge left 2 out of the 3 chargers routed in the turn. Give me a lucky general!

ozzie replied the topic: #264 3 years 1 month ago
Another play and another 7-5 British win. The initial British bayonet charge took out 3 American centre regiments and it looked an American disaster was in the offing. But a steady stream of shooting casualties brought the result back to 5-5 and the British centre was thinning. The British general played the Steal a March card to put the grenadiers, 2 Provincial and a regular regiment with generals in support in the face of the surviving American left wing regiments and these were crushed in the following turn. Learned's command was largely bogged down att eh rear so support was thin on the ground.

ozzie replied the topic: #263 3 years 1 month ago
This is a very well balanced scenario that gives both sides a chance of victory.

ozzie replied the topic: #262 3 years 1 month ago
A 7-5 British comeback win after the American general Poor led a regiment of regulars in a series of bayonet charges that smashed the British centre. The grenadiers fell beating back Learned's advance but the British light infantry wiped the floor with American Militia. The British Provincial infantry supported by their generals held the centre and right while the Hessians and General Philips' command won the day.

ozzie replied the topic: #215 4 years 1 month ago
An easy 7-3 British win with the Brits playing Line Volley after Line Command after Line Volley to decimate the American line and finish it with the bayonet.

Mark McG replied the topic: #156 4 years 8 months ago
went from 4-2 up as the Continentals to 4-5 from 1 two die attack as Learned's unit, then Learned, then another unit fled the battle
Read More...