After the battle of Freeman’s farm, Burgoyne, running low on men and food, was still in a very difficult position, but decided to wait in the hope that Clinton would arrive to join his army. While in the Continental camp resentment between Horatio Gates and Benedict Arnold finally exploded into open hostility. Arnold asked for a transfer to Washington’s command, which Gates granted, but instead of leaving he remained in camp. In early October, Burgoyne decided to again reconnoiter the American left flank sending Fraser’s Advanced Corps forward to see if an attack was possible.
Fraser advanced about three quarters of a mile to a rise above Mill Brook, where he stopped to observe the American position.
When Continental scouts brought news of Burgoyne’s movement to Gates, he immediately ordered Morgan and Poor’s command to engage the enemy supported by Broeck’s large militia brigade.
The British force broke and retreated back toward their entrenchments, when Fraser was mortally wounded.
The stage is set. The battle lines are drawn and you are in command. The rest is history? 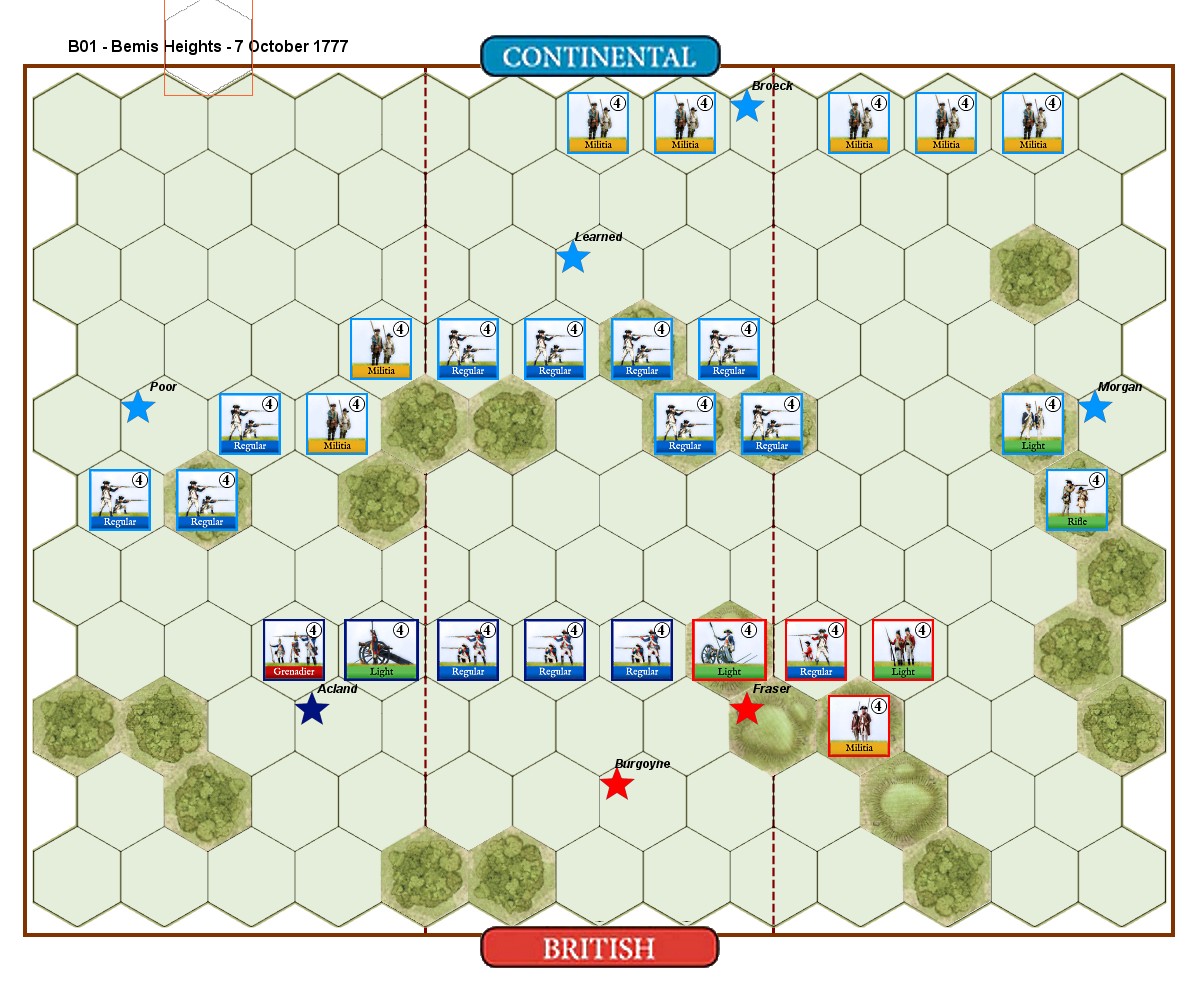 • Opening Cannonade rules are in effect.

mirkobruner replied the topic: #293 2 years 8 months ago
April 1st 2020
The Continentals were holding back very well the advancing of the British.
Center Section of the Board was impassable for the redcoats and eventually they had to reform in the left section, moving both pieces of the light artillery. After a couple of turns very lucky to the Continentals the great of the battle was fought into the woods of the center-right and right section. Cards for the Redcoats were really good and dice tosses for the Nation Makers really Bad.
Continentals were winning 3-0 at the beginning but the match was lost for them when Hessian Artillery fire eliminated the last hidden unit in the woods led by general Poor. The game ended in favour of the British for a close 6-5.

ozzie replied the topic: #277 2 years 10 months ago
Another game, another Hessian Grenadier onslaught. This time General Acland was killed in a volley by a Militia unit (those double-sword die rolls!) but the British player was able to keep the Grenadiers moving and they just rolled what they needed to keep hurting and breaking Continental units. A much closer game 6-5 to the British with the Continental lights well-used and destroying the British light infantry unit with musketry (4 symbols rolled from 8 dice).

Mark McG replied the topic: #276 2 years 11 months ago
I played this scenario yesterday against a player new to Tricorne.

As the Continentals I formed along the woods, and with several Line Commands spent two turns volleying into the British. The Grenadiers took several hits, and the British left dropped back. At this point the Continental right moved forward to try and finish them off. A British Line Volley did substantial damage, including a Regular routing along with Poor. Then the Grenadiers rallied up to Full Strength (from 1 block) and proceeded to Bayonet charge the depleted Continentals led by Acland. Those Grenadiers were untouchable, and took down 2-3 units.

ozzie replied the topic: #274 2 years 11 months ago
This scenario is more even than it looks, but only if the initial cards fall right for the British. Started with an amazing 9-4 win to the Brits with the Hessian Grenadiers accompanied by General Acland, cutting a swathe through the Continental ranksand turning a 5-4 lead into a 9-4 win on the last turn. The grenadiers destroyed 2 units and a general on the last turn to make a tally of 5 kills for the game. In game turn the Hessian Grenadiers with General Acland in tow cut another swathe through the Continental ranks to bring about a 6-1 win and finish the game on the Continental baseline. These men are truly heroes of the Empire!

In both games the Hessian Regulars were heavily damaged and even driven from the field but enough came from their bayonet attacks to smash a few Continentals before they got taken down. In game 1 General Burgoyne disgraced himself by routing with a unit of Hessians he was trying to rally from a retreat. Despite the results the casualties on the British side were heavy but, hey, that's the risk of a recon in force. General Fraser managed to survive both battles so a turnaround there.

In both games the Continentals failed to take advantage of Morgan's command of rifles and lights but this was as a result of the continued punching of the Hessian Grenadiers on the opposite flank which saw the Continentals always reacting to these and unable to make their own plays.

The lesson for the Continentals is to deal with the Hessian Grenadiers and artillery first at all costs as these two units with General Acland can cost them the game.

ozzie replied the topic: #227 3 years 11 months ago
A tough one for the British. The Americans won 6-2 with Hessian left over run and then the British line rolled up. The British Lights tried hard and got the American lights out of the woods with General Fraser leading the way but the Militia stabilised this breakthrough and shot it to pieces.

ozzie replied the topic: #196 4 years 4 months ago
A couple of decent games had with this scenario, the first a close-run 7-5 win to the Americans and the second a 7-3 win to the British.
The first game had the Americans leap to a 4-0 advantage and with the Hessian artillery and British Light Infantry unexpectedly routing whilst at full strength - what are odds?!!!! The Hessians Grenadiers put up some resistance but, isolated, they were blown apart by massed American muskets. Then the British staged a comeback with the Americans getting cocky and sending in a Bayonet Charge. Unfortunately, for them, the British has 2 First Strike cards and routed all 3 American Regulars by scoring some hits and Flags, and the American units obligingly failing to roll a single Flag and routing off the board. With their own Bayonet Charge the scattered British units came within an ace of victory, destroying 2 more American Regular Infantry units and following up into an isolated general, who survived. The lead British unit was, in turn broken and its general fled from the field giving the Americans victory.
Game 2 saw the Americans suffer some heavy casualties in artillery and musket exchanges and the British passing their rout tests. The Americans rallied their line twice and sent in a right flank attack which overwhelmed the Hessians Grenadiers, who took an American Regular Infantry unit with them and then fail utterly in the face of Hessian artillery with an attached general. A British bayonet charge and line volley saw the Americans crumble and flee. Hats off General Fraser and his bayonet happy Light and Regular Infantry who cleared 3 enemy units and killed General Learned. The Hessians and support artillery kept on inflicting hits and the Americans broke. Burgoyne's successful pull-back of his last 2 Hessians units and the two weakened artillery units allowed them the break the exposed American right wing and yet stay safely away from the tree line.
Read More...