At Chadds Ford, after Greene’s division was ordered to support the right, Knyphausen heard the sound of gunfire from the north and attacked. Once across the Brandywine, the Continental gun position was quickly overrun. Outnumbered, Wayne and Armstrong tried to hold on, but finally carried out a running retreat. Knyphausen attack, slowed by the rugged terrain, came to a halt when darkness fell.
The stage is set. The battle lines are drawn and you are in command. The rest is history? 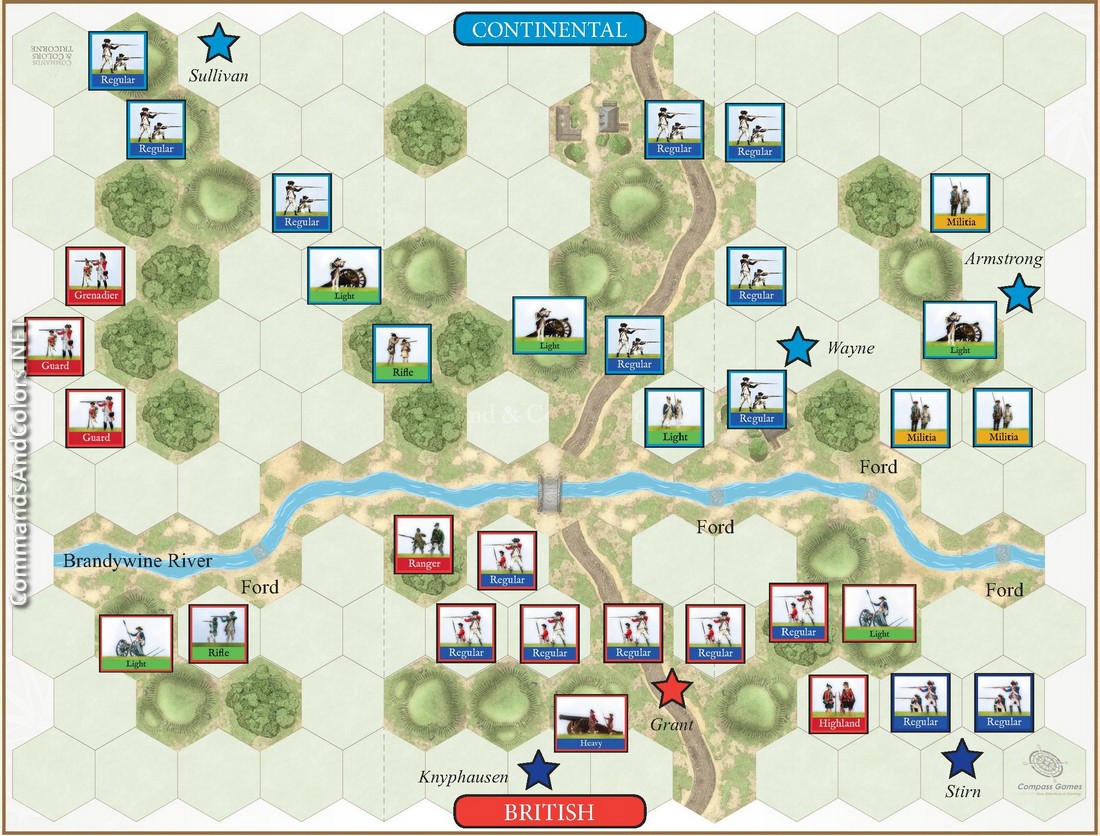 ozzie replied the topic: #503 1 year 11 months ago
A much harder fought 7-5 to the British with he Grenadiers and Guards cleaning the American right off the board and Stirn's hessians crushing the militia. The British central attack stalled at the building hex with countless assaults causing a steady trickle of casualties until a couple of units (including the Highlanders) routing. Wayne and his unit of Regulars in the buildings were true heroes of the Republic holding off all comers and even recapturing the buildings when a British assault pushed them out. Their heroics gave the Americans time to retreat some units off the road but the Militia were largely left hung out to dry with no supporting Cards to help them out. Terrific game which could have gone either way until the Grenadiers and Guards showed to clean up wholes units with volley firing and then attacks. Nothing you can go when they roll 4 hits with 4 dice twice in a row!

ozzie replied the topic: #501 1 year 11 months ago
A 7-1 British victory with the Americans failing to destroy a single British unit or get any of their own off the board. The British player's hand of cards just had all the answers in a succession of Line Commands, Line Volleys and In spired Leadership cards whilst the Americans ever had a card that could move more than 2 units. Tough luck (for me - I was the Americans) but the fight over the building hex by the river was a slog fest that eventually ground American units to death including General Wayne. Just when the Americans thought they were in with a chance the British played the Rally card and rolled up 6 infantry/flag symbols to rally two depleted units back to full strength who then finished off Wayne's brigade. A one-sided run of luck for the British but I will get them next time!
Read More...