Around 2:30 on the 11th, Howe’s plan was carried out. Cornwallis was in position and shook his column out into line near Osborne’s hill, resting his troops for an hour, and then advanced toward the Birmingham Meeting House. Washington, now very aware of Cornwallis’ movement, ordered Sterling and Stephan to move to Birmingham Hill to protect his flank. The two divisions arrived just in time to meet the British advance head on. Stephen’s troops, however, could not stand the British attack and broke. Sullivan then arrived on the scene, but the Continental units could not hold against the steady attack of Cornwallis’ men. Greene was also ordered to pull his division away from Chadds Ford to reinforce the right. Greene quickly moved and deployed his line, which allowed the shaken troops of Sterling, Stephan and Sullivan divisions to pass through his ranks to  rally.
The stage is set. The battle lines are drawn and you are in command. The rest is history? 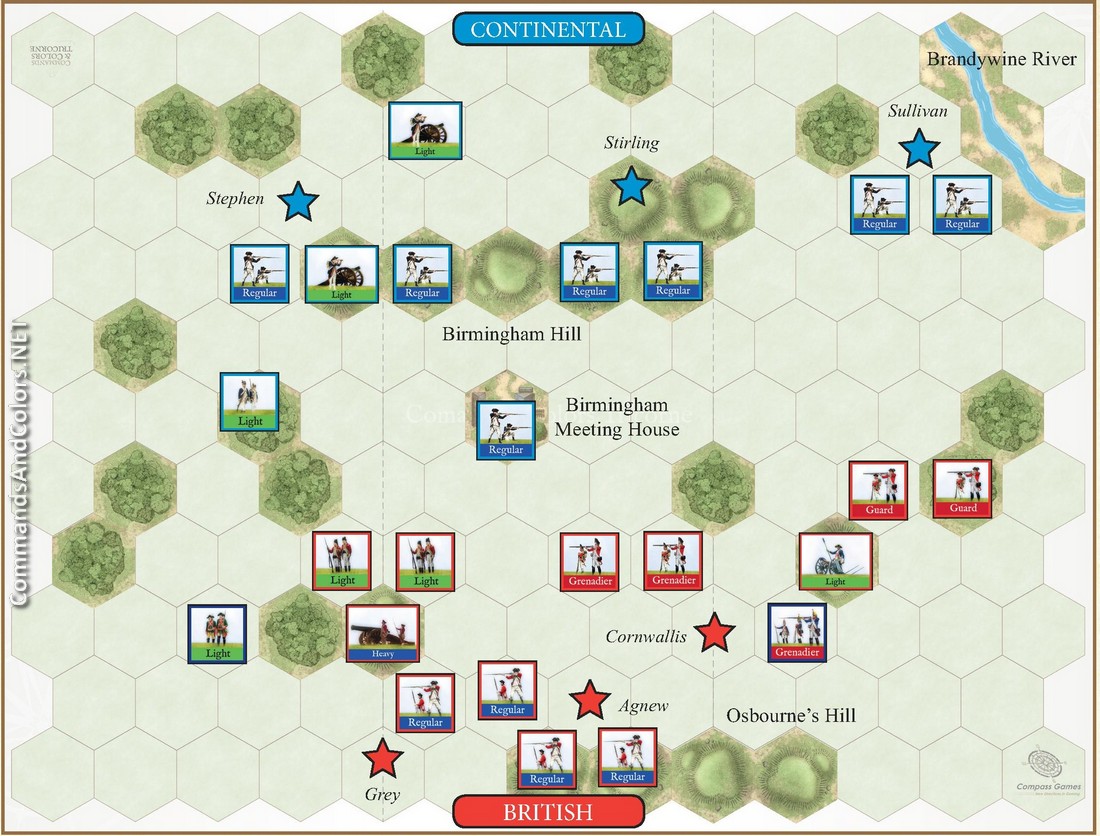 apergis1@verizon.net replied the topic: #642 10 months 1 week ago
My wife and I played this for the first time and we feel it is one of the best American Revolution Scenarios we have played and it appears to be very balanced.

mirkobruner replied the topic: #368 1 year 9 months ago
You're right Mark! Sorry My Bad!

Mark McG replied the topic: #367 1 year 9 months ago
so on the win loss record it shows 2 Continental victories and 0 British victories, and the last recorded result was from Mirko. So i suspect this should have been recorded as a British win, and in the greater scheme of results won't matter much, but please pay attention to which side (top or bottom) won when recording results. Recording the wrong side is worse than not recording at all.

Data is only as good as the input!

magooF15 replied the topic: #365 1 year 9 months ago
Funny, that’s pretty much how the actual battle transpired as well. The Continental left caved in under an assault from the Guards. Always amazes me that such a simple game system can mirror history quite well.

mirkobruner replied the topic: #364 1 year 9 months ago
Just had a game with Jim. Brits won 7-Nil. The Elite on the Right did Massive Damage to the Continental Troops because of two unexpected Bayonet Attacks. Great Game is Tricorne. Always Fun.
Read More...