The French and Indians arrived too late to set an ambush, as they had been delayed, and the British had made surprisingly speedy progress. They ran into the British advance guard, commanded by Lieutenant Colonel Thomas Gage. Seeing the enemy in the trees, Gage ordered his men to open fire. Despite firing at very long range for a smooth-bored musket, their opening volleys succeeded in killing Captain Beaujeu.
British forces are attacked by Native American, French, and Canadian forces positioned along the tree line. Unconcerned by the death of Beaujeu, the Indian warriors took up positions to attack. They were fighting on an Indian hunting ground which favored their tactics, with numerous trees and shrubbery separated by wide open spaces. Although roughly a hundred of the Canadians fled back to the fort, Captain Dumas rallied the rest of the French troops.
As they came under heavy fire, Gage's advance guard began taking casualties and withdrew. In the narrow confines of the road, they collided with the main body of Braddock's force, which had advanced rapidly when the shots were heard. Despite comfortably outnumbering their attackers, the British were immediately on the defensive. The entire column dissolved in disorder as the Canadian militiamen and Indians enveloped them and continued to snipe at the British flanks from the woods on the sides of the road. At this time, the French regulars began advancing along the road and began to push the British back. General Braddock rode forward to try to rally his men, who had lost all sense of unit cohesion.
Following Braddock's lead, the officers tried to reform units into regular order within the confines of the road. This effort was mostly in vain, and simply provided targets for their concealed enemy. Cannon were used, but due to the confines of the forest road, they were ineffective. Braddock had several horses shot under him, yet retained his composure, providing the only sign of order to the frightened British soldiers. Many of the Americans, lacking the training of British regulars to stand their ground, fled and sheltered behind trees, where they were mistaken for enemy fighters by the redcoats, who fired upon them. The rearguard, made up of Virginians, managed to fight effectively from the trees—something they had learned in previous years of fighting Indians.
Despite the unfavorable conditions, the British began to stand firm and blast volleys at the enemy. Braddock believed that the enemy would eventually give way in the face of the discipline displayed by the English-led troops. Despite lacking officers to command them, the often makeshift platoons continued to hold their crude ranks. After three hours of intense combat, General Braddock was mortally wounded, resulting in the withdrawal of British forces.
The stage is set. The battle lines are drawn and you are in command. The rest is history? 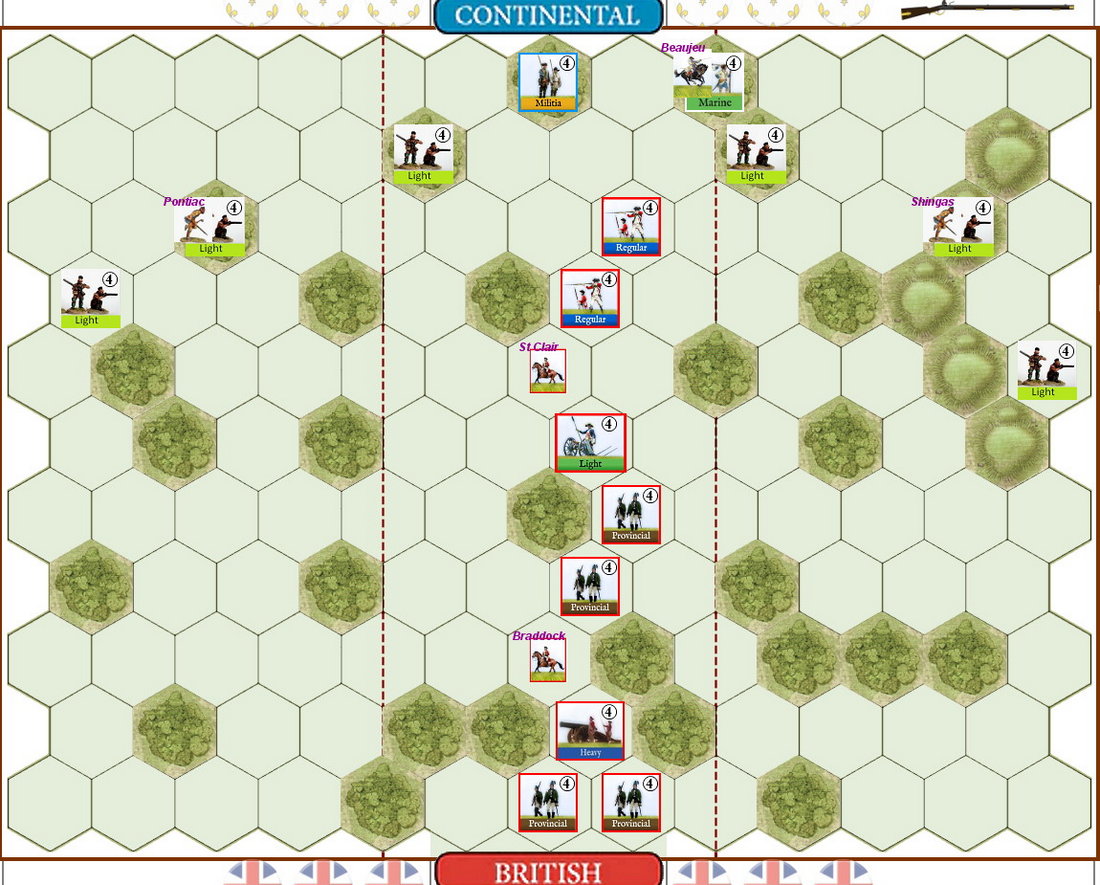 • *The British are surprised, British start with 2 Command cards. End of turn 1 and 2 draw 2 cards. Start of turn 3 British will hold 4 cards.
• No Opening carronade