In the early stages of the American Revolutionary War, General Gage, the British commander in chief in Boston, planned to seize the Charlestown peninsula, but before he could act, on the night of 16th June 1775, Continental troops occupied Breed’s Hill and Bunker Hill and began to build a redoubt on Breed’s Hill. The next day, the presence of the Continental troops was observed by His Majesty’s Ship Lively, which opened fire on the position. With Major General Howe in command, plans were hurriedly put in motion to attack the Continental troops. Howe landed his forces on the southern shore of the peninsular and at once directed his light infantry to attack the section of Continental line along the Mystic River. The light infantry column was repelled with heavy casualties. The General then ordered a frontal assault on the redoubt with the main body of troops. It was also repulsed with significant British casualties. The third attack finally succeeded in capturing the redoubt and the colonists retreated to Cambridge over Bunker Hill, leaving the British in control of the Peninsula.
The stage is set. The battle lines are drawn and you are in command. The rest is history? 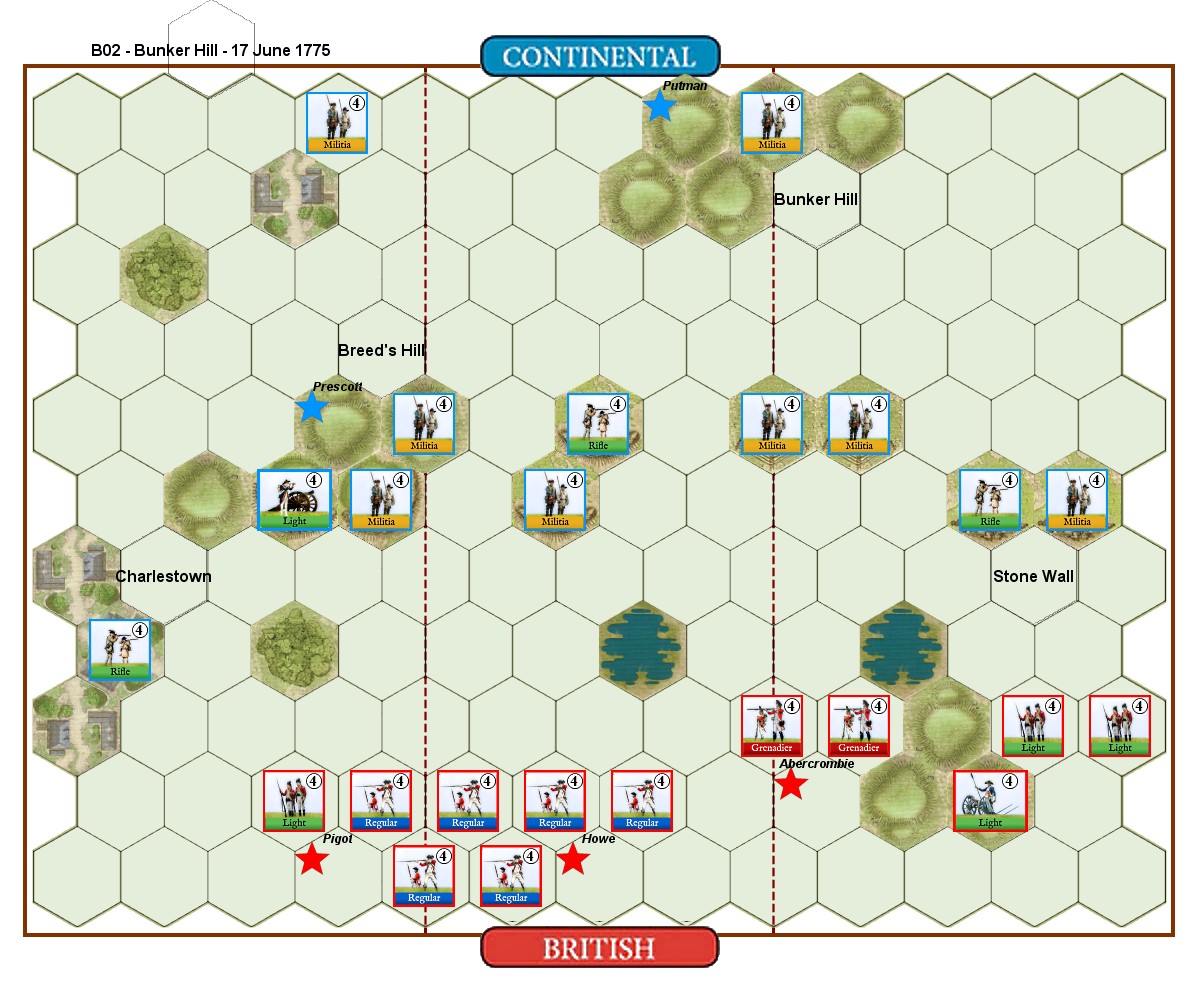 Putman should be Putnam

Additional Explanation: A hex with a dotted line is considered as a center section hex for purposes of determining whether there are no Continental units occupying a section of the battlefield. (French and More Expansion, see Page 8)

Q: Is ranged fire from the “Lively” considered artillery fire for terrain effects purposes?
A: NO. HOWEVER, UNLIKE FOR OTHER RANGED FIRE, TERRAIN PROVIDES NO PROTECTION AGAINST RANGED FIRE FROM THE “LIVELY”. (RB)

Q: Does the “Lively” fire with two additional dice when a Bombard Command Card is played?
A: NO, IT FIRES WITH 1 DIE AS THE SPECIAL RULE FOR THE SCENARIO INDICATES.

Q: Does the “Lively” need a Line of Sight to fire?
A: NO, IT CAN FIRE AGAINST ANY HEX OF BREED’S HILL OR CHARLESTOWN AS THE SPECIAL RULE FOR THE SCENARIO INDICATES.

mirkobruner replied the topic: #284 2 years 8 months ago
In the Boxed Game for the Continental Army, General Stark is also deployed behind the Stone wall in the right section. Not here. He should be added.
For the Opening Cannonade rule it is not clear if the attack of the Lively must be added to the normal Opening Cannonade of the Artillery, but I suppose yes.
Regards,
Mi®ko

ozzie replied the topic: #270 3 years 1 month ago
A 6-2 win to the British but closer than it looked and only taking 3 hexes on Breed's Hill won it. The British light infantry launched bayonet attacks on turn 1. They succeeded in chasing the rifles from Charlestown and destroying half their number whilst the light infantry attack on the right wing resulted in heavy casualties to the Americans (both reduced by half) but the light infantry repulsed and eventually driven to the base edge and, in fact, were lucky to survive several rout tests.
The British regulars advanced enmasse led by their generals and eventually took the American redoubts on Breed's Hill and held it. 3 British regular units were reduced to single bases by the time victory was secured but they had managed to withdraw these into support positions to protect them.
An enjoyable scenario to play mainly because the British must attack and the Americans just need to shoot, reinforce from the base edge units if they can and just hold on for as long as possible.

ozzie replied the topic: #183 4 years 4 months ago
This scenario is not as one-sided as it looks. A superb start by the Americans racing to a 4-0 result by decimating the British light infantry attacks and then beating back an all-out attack of the British Regulars. At this stage it wasn't looking too good for the British. The British managed to rout the Riflemen holding Charlestown to relieve pressure on their right flank plus damage the American artillery. The British looked a bit out of sorts though by this stage and the non-British players were wondering what the British had left up their sleeve. What was up the British sleeve was the "At the Quick Step" card and the grenadiers with General Abercrombie marched straight to the central fence line held by Militia. The Americans were unable to respond in their turn and the grenadiers just tore the Militia apart followed within 2 more turns by the Americans behind the stone wall and the Militia and Riflemen in the centre redoubts. The 4-0 quickly changed to a 4-6 and the British won but not without a mauling. Just another day out for the Grenadiers!

Hawkmoon replied the topic: #162 4 years 6 months ago
Hi everyone,

I have a question about the ship which can make artillery fires upon the town and Bunker Hill :

It is said in the description of the scenario that it fires at one dice and be activated by Bombardment card (and during opening cannonnade);

So, does the ship has 2 extra dices when playing Bombardment ?
sduke12 replied the topic: #133 4 years 10 months ago
Sorry, it was two victories for the Continentals, not the Brits.
Read More...