Lewis Gordon had been raising forces for the Jacobites in the North, but when confronted by John Campbell, who was the King’s CIC, was joined by Munro and MacLeod’s troops, Gordon choose to retire to Aberdeen. The Government forces halted their advance on Gordon and occupied the town of Inverurie about 16 miles from Aberdeen. Gordon, seeing this as an opportunity, split his command and attacked the town from two directions. MacLeod was taken by surprise when Lewis Gordon’s men came streaming down the hill. MacLeod tried to react, but by this time, the second Jacobite column had crossed the Don River. The Government forces were being vigorously pressed and finally gave way and retreated as night was coming on. 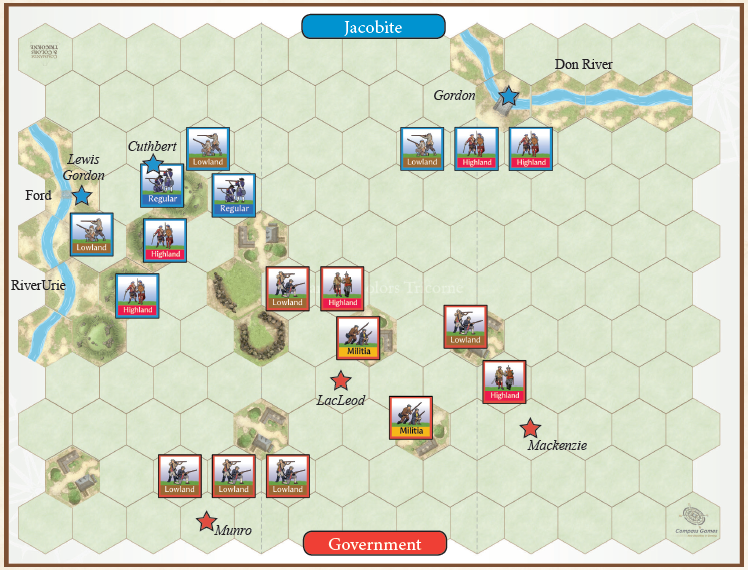 • Both sides use the Jacobite deck of Combat cards.
• The Jacobite player gains 1 Temporary Victory Banner for each building occupied at the start of his turn.
• Withdraw objective rules are in effect for the Government player. When a total of 4 banners have been gained between both players, 1 Permanent Victory Banner is gained for each ordered Government unit that exits the battlefield from the Government baseline.
• All waterways are fordable.

I think there was a tournament timing effect here, where the later plays learned from early results to have their Government units lined up for exit once the trigger was reached.
Read More...