Being pressed North by the Duke of Cumberland, Price Charles ordered his Jacobite army to fall back to Scotland. Murray, when he received the order to retire to Carlisle was still in Clifton and already engaged with the Duke of Cumberland’s dismounted dragoons. Murray determined it would be difficult and dangerous to make an orderly retreat while already under attack. His only hope therefore seemed to be to first drive back the advancing dragoons. It was about an hour after dusk when Murray led his Highlanders against the Government right. The Highland charge drove the thin line of dismounted dragoons back, which gave Murray’s Jacobites the pause in the action they needed to break contact and retreat north. 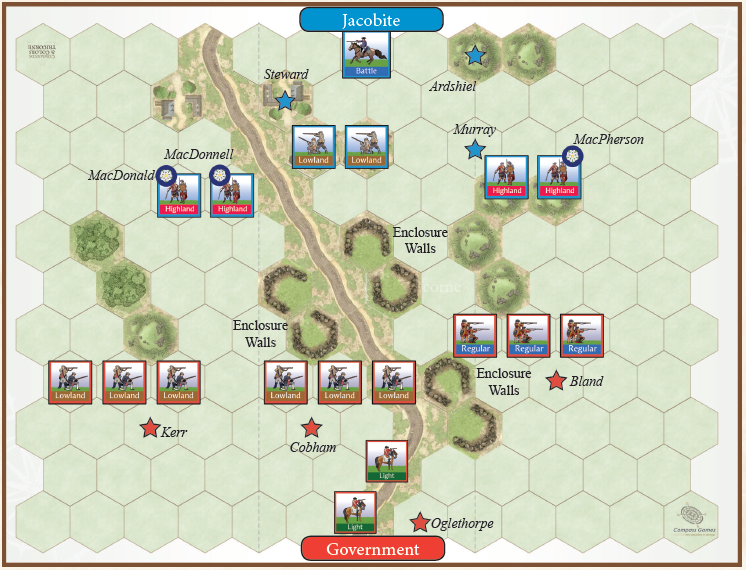 • Clearing a section rules are in effect for both players.
A Victory Banner is permanently gained when there are no enemy units in a section of the battlefield at the start of a player’s turn. In addition, at the start of each of your turns as long as there are no enemy units in the section, you will gain 1 additional permanent Victory Banner. Note - the hexes with a dotted line are considered center hexes.
• The Government player scores an immediate victory when a Government unit occupies a building hex at the start of his turn.
• Time pressure objective rules are in effect for both players. When playing a “Scout” Command card, the player may draw 1 Command card and take 1 Permanent Victory Banner instead of drawing 2 Command cards.

I don't recall any similar all or nothing type scenario results.
Read More...